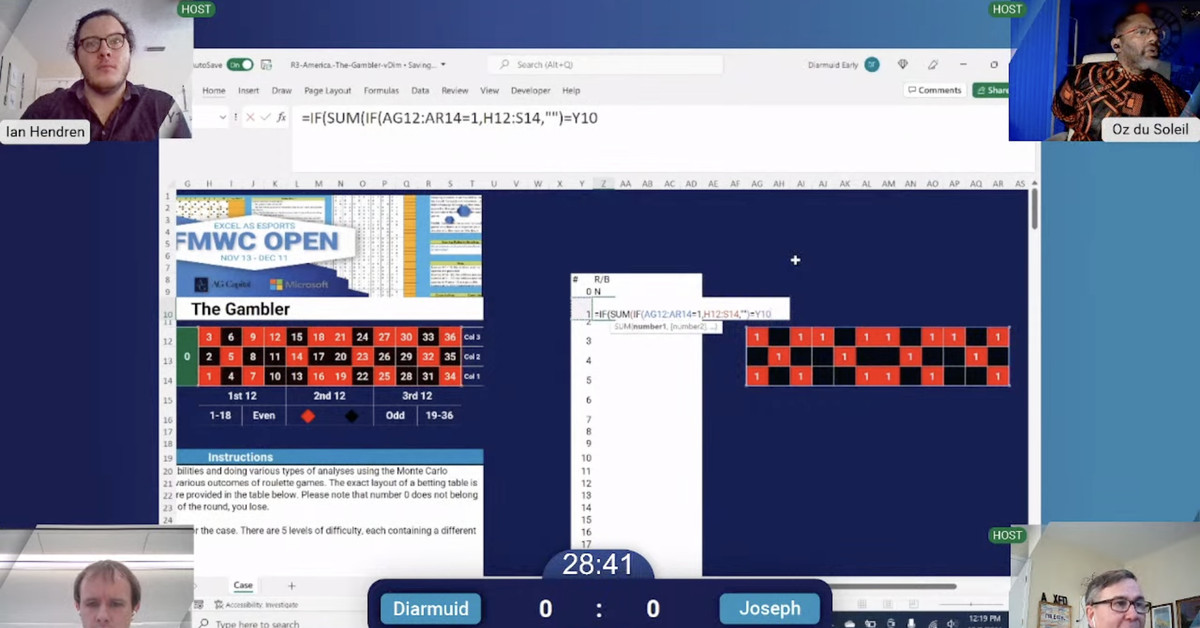 Microsoft is sponsoring an esports competition with prizes totaling $10,000. The game? Well, it’s not exactly a game — it’s Microsoft Excel.

Every year, the top Microsoft Excel users (players?) from around the world face off in the Financial Modeling World Cup (FMWC) (via PCWorld). The qualifying rounds already took place, leaving just eight Excel masters to compete for the FMWC crown. The quarter-finals, semifinals, and final round all take place today at 12PM ET via a YouTube livestream and the ESPN app.

Tomorrow, December 11, is the day for the FMWC Open finals!

8 quarter-finalists will showcase their Excel wizardry to earn the Excel master title and a share of the $10,000 prize fund.

We go live at 5:00 PM UTC+0 on our Youtube channelhttps://t.co/TbkInoJF85 and ESPN App! pic.twitter.com/VVEtudQta9

According to the FMWC rules, competitors are presented with a one to five-page long case study during each round. Case studies contain real-world problems, along with six to 15 questions that vary in complexity — the more complex a question, the more points are awarded to the player.

Participants will, of course, have to use their financial modeling skills to determine the answer to each question. The sample cases on the FMWC site can give you a glimpse of what kinds of problems these Excel pros solve have to solve, some of which they may encounter during a typical workday, and others, dubbed “freestyle,” might have a more unusual subject matter.

And if you never thought you’d get amped up over an Excel tournament, think again. Surprisingly enough, watching a livestream of the FWMC feels just as exciting as watching your typical esports event, complete with announcers, live commentary, and a scoreboard. It even has a bracket system to track the progress of the competition, as well as a ranking system — appropriately made with an Excel spreadsheet — with Diarmuid Early of New York at the top of the global leaderboard, followed by Anup Agarwal of India, and Andrew Ngai of England.

The FWMC isn’t the only competition of its kind, either — the Microsoft Office Specialist World Championship covers the entire Office suite, including Excel, Word, and PowerPoint, and challenges students to become the “Microsoft Champion.”