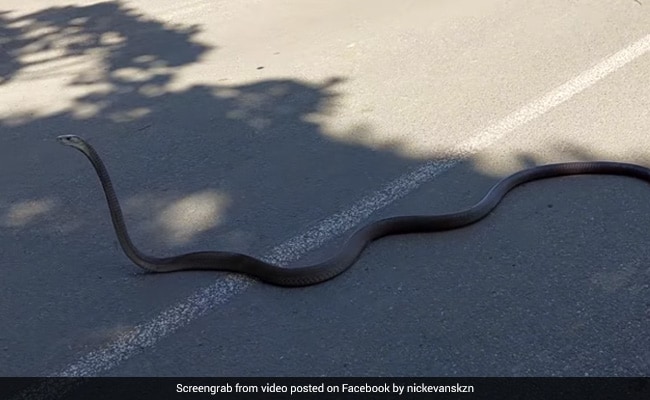 Black mambas are highly venomous and are the deadliest snakes in the world.

After being run over by a car, an enormous black mamba was caught on camera slithering across a road in South Africa. Taking to Facebook, snake catcher Nick Evans, who owns a snake removal business in the eastern KwaZulu-Natal province, arrived at the spot where “concerned residents” had spotted the mamba slithering around. He shared the footage of the huge snake with its head raised.

Mr Evans said that when the residents noticed the mamba was injured, they stopped the traffic to avoid further injuries or death. They even called the snake catcher, who, upon arrival, said that he was impressed by the height the 2.4-metre snake rose up off the ground.

“My wife and I drove over, expecting to find a dying mamba, which is the case in all the mamba calls I’ve had where they’ve been run over. Well, to our very pleasant surprise, it looked very lively!” Mr Evans said in the social media post.

The snake catcher explained that black mambas only ever raise their heads in this way when they feel cornered and threatened. He informed that they usually slither around with the bodies flat on the ground. Mr Evans said that the snake would have been in an “incredible amount of pain” after the car drove over it.

“It was absolutely terrified, as there were humans all around it, and one approaching it,” he said.

Mr Evans stated that he managed to catch the injured mamba, and upon securing its head in his hand, he found blood in its mouth and nose. The snake-catcher took it back with him and said that it still seems strong a few hours after the incident. Now, Mr Evans is “desperately hoping” the snake doesn’t die, although he is “half expecting it to”.

“I will take it to a vet tomorrow for x-rays. I don’t think much can be done for it. It will have some broken bones, which can heal by themselves. Internal bleeding is a worry, but hard to fix that,” he said. “I think it just needs rest and warmth. Fingers crossed…a huge thank you to the residents for what they did for this snake,” Mr Evans said on Facebook.

It is to mention that black mambas are highly venomous and are the deadliest snakes in the world. They are also Africa’s longest snake and can reach up to 14 feet in length.