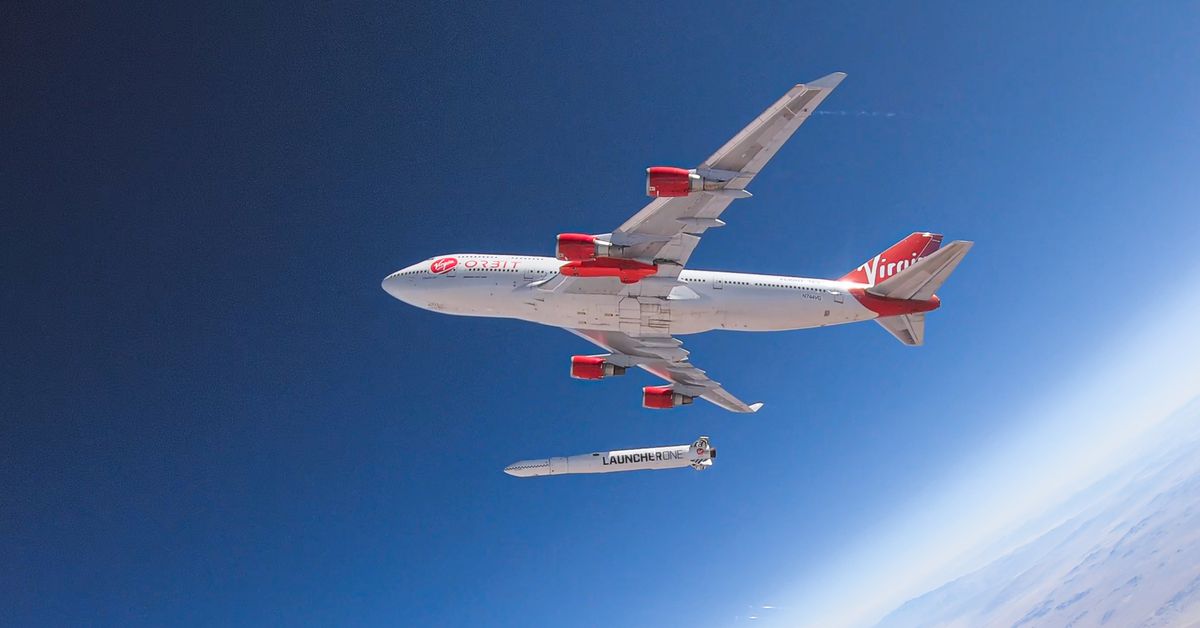 This afternoon, small satellite launcher Virgin Orbit successfully lofted seven tiny satellites into orbit around Earth, marking the third successful mission for the Virgin Galactic spinoff company. The payloads consisted of various research satellites for the Department of Defense, along with three small satellites from companies SatRevolution and Spire Global.

The launch comes less than a week after Virgin Orbit’s stock began publicly trading for the first time on the New York Stock Exchange. Virgin Orbit announced in August its plan to go public through a merger with a special purpose acquisition company, or SPAC, making it one of three small rocket launch companies to follow the trend in 2021. On Friday, January 7th, Virgin Orbit CEO Dan Hart rang the Nasdaq opening bell, while the company put a model of its primary rocket, LauncherOne, on display in New York City’s Times Square.

Virgin Orbit is one of many rocket companies that have cropped up in the last few decades, aimed at specifically launching small- to medium-sized satellites into orbit. However, the company’s approach to getting these satellites into space is a bit unique compared to its competitors. Instead of launching vertically from the ground, Virgin Orbit’s LauncherOne rocket is designed to take off from underneath the wing of a carrier aircraft, a refurbished Boeing 747 called Cosmic Girl. The plane is meant to take LauncherOne up to an altitude of approximately 35,000 feet, where the rocket is then released. In mid-air, LauncherOne ignites its main engine and propels its payloads the rest of the way into Earth’s orbit.

Today’s flight, called “Above the Clouds,” began at 4:39PM ET, when Cosmic Girl took off from a runway at the Mojave Air and Space Port in California, where Virgin Orbit has a testing facility. The plane flew out west over the Pacific Ocean, where LauncherOne was released at 5:52PM ET. Flying the plane for this mission was Virgin Orbit’s pilot, Eric Bippert. He was accompanied in the cockpit by Matthew Stannard, or Stanny, a test pilot for the Royal Air Force in the United Kingdom who has been seconded to Virgin Orbit. Stanny was the one to initiate LauncherOne’s release from underneath Cosmic Girl’s wing.

Virgin Orbit’s launch occurred on the same day as SpaceX’s second launch of the year, which also sent a crop of small satellites into orbit on the company’s Falcon 9 rocket out of Cape Canaveral, Florida. SpaceX’s launch, called Transporter-3, hoisted a whopping 105 small satellites into orbit, deploying them one by one into space. Such a flight is often referred to as a rocket rideshare, and it’s another option for small satellite manufacturers to get their payloads into space. Since SpaceX’s Falcon 9 has a bigger capacity than a smaller rocket like LauncherOne, it can carry a bunch of small satellites at once into space, a bit like a cosmic carpool. SpaceX aims to launch at least three dedicated rocket rideshares a year through its Smallsat Rideshare Program.

Today’s flight was called “Above the Clouds”

Rocket rideshares have their downsides, though. For one thing, small satellite manufacturers often need to wait until enough satellites are packed onto one rocket in order to launch. There are also some logistical issues that can come with launching so many satellites at once. Dedicated small launch providers like Virgin Orbit can tailor their missions to just a few customers and can, in theory, provide a quicker route to the launchpad. In fact, Virgin Orbit claims that Spire’s satellite was added relatively last minute to today’s flight. “In just under two weeks, we got them on board,” Tony Gingiss, Virgin Orbit’s COO, said during a press conference ahead of the launch. “Within 24 hours of signing the contract, we already had them integrated into the fairing” — the nosecone on top of the rocket.

Of course, Virgin Orbit will need to up its launch cadence in order to offer a rapid path to space for customers. So far, the company is averaging about six months between launches. But Virgin Orbit CEO Dan Hart says the company is targeting six launches this year, which would double the launch cadence. Two of those launches are supposed to take place out of Spaceport Cornwall in the UK, established at the Cornwall Airport Newquay.