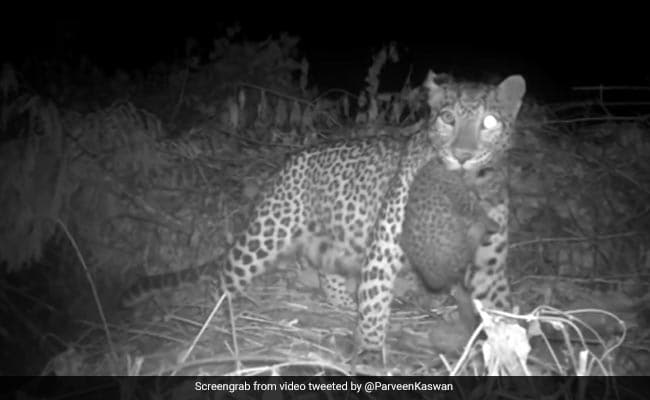 Mother’s love is the greatest love in the world. Whether in human beings or animals, with its mother, a child feels protected, loved, and safe. One such video is gaining traction on social media that shows reunion of a mother leopard and its cub.

Shared by Indian Forest Officer (IFS), Parween Kaswan on Twitter on Tuesday, the mother leopard is shown at the starting of the video cradling her pup in its mouth. The cub is kept on the ground for a bit before being placed back into her mouth. The mother leopard may then be seen moving into the bushes.

What can be more beautiful than this. Cubs were secured & then mother came and took her back. Yesterday night. pic.twitter.com/snwEU7rQbb

Sharing the post, Mr Kaswan wrote, “What can be more beautiful than this. Cubs were secured & then mother came and took her back.”

Since being shared, the video has amassed over 43,000 views and more than 2,000 likes. More than hundred users have retweeted the post so far. Numerous users have adored the post giving heartfelt remarks in the comment section of the post.

One user wrote, “Kudos to the mother and night vision game cam.”

“Reminds me of a verse in Paanineeya Shiksha (ancient work on phonetics) where the author says “pronounce words like how the tigress carries her cubs” neither too harsh as it will kill the cubs nor too light as the cubs will be dropped,” wrote another user.

In a subsequent tweet, Mr Kaswan said, “That is how leopard mothers are carrying their cubs. Even all cat species. Depending upon the numbers of cubs the rounds are made.”