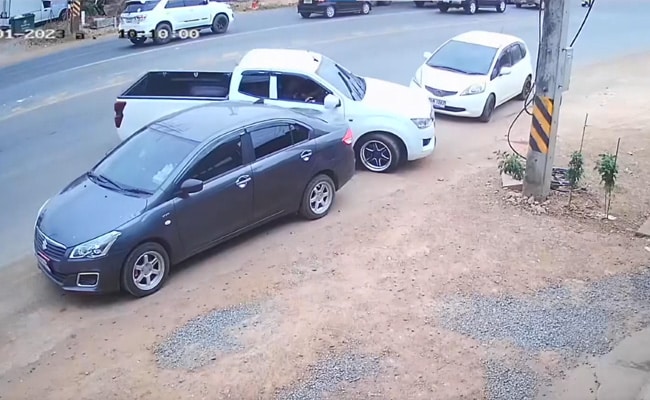 The driver was later seen stepping down from the truck uninjured.

The video shows a white truck swerving along the road before ramming a black Suzuki sedan. Further in the video, the truck moved along the dirt road before it halted. The driver was later seen stepping down from the truck uninjured. The video of the incident has been released by Viral Press and distributed by AP.

Charanwong Sukhom, 27, who owned the black sedan, said: “There was an insurance company that covered some of the damages but the driver refused to pay me for the other fees and waste of time.”

Piyaporn, the owner of the store and security cameras that recorded the collision, said her shop was spared from any damage. She said: “I gave them a copy of the video to help with the investigation.”

Meanwhile, a video of a man dodging a car that spun out of control also went viral recently. The incident took place in Udon Thani province in Thailand on January 10. The unidentified man had gone to the market to buy groceries and was about to climb onto his parked scooter when he saw a blue car hurtling towards him, as seen in the video. The man quickly jumped out of the way, thereby saving his life.

The car knocked over his two-wheeler, the CCTV footage further showed. A man came out of the passenger seat, along with a woman who was driving the vehicle to assess the damage.