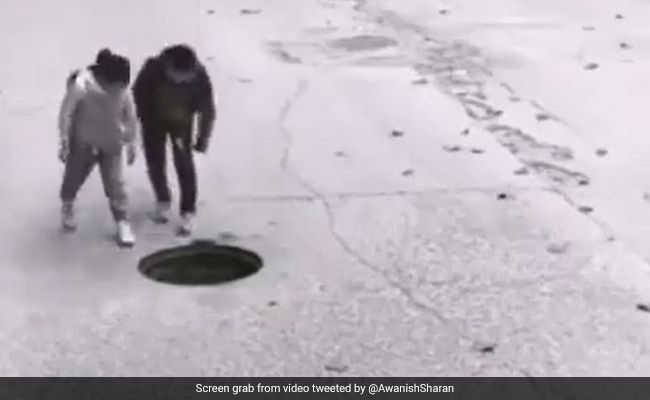 The video has amassed more than 18,000 views on Twitter

Goodness doesn’t come with age, nor does it require any monumental act. Small acts of kindness can also make a huge difference. Proving just that, a video of children covering an open manhole on a busy road has surfaced on the internet. Posted by Awanish Sharan, an Indian Administrative Service (IAS) officer on Twitter, the video is winning hearts on social media.

In the new video, two children can be seen walking on a busy road when they spot an open manhole. But, instead of passing by it, these kids bring big pieces of rocks and lay them around the manhole, preventing any major accident.

Along with the video, the caption reads, “You are never too young to make a difference.”

You are never too young to make a difference. pic.twitter.com/jZ95Hj7N5e

Since being posted, the video has amassed more than 18,000 views on Twitter. The internet appreciated the effort of the children. A user wrote, “Great Humanity, God bless you Children.” Another user commented, “Right direction guidance for youth.”

“They teach us, appreciating work,” the third user wrote. “Inspirational,” the fourth commented.

Mr Sharan often shares motivational and informative posts on his social media handles. Recently, he shared a photo on Twitter on the growing importance of saving water.

The photo shows a man standing with a placard in his hand, which reads, “When full is not needed, ask for a cutting pani.” This powerful message grabbed the attention of many users and they appreciated sending a strong message with such simplicity.

“Take half a glass of water in a hotel restaurant. Ask for more only when necessary,” says the caption of the now-viral post.