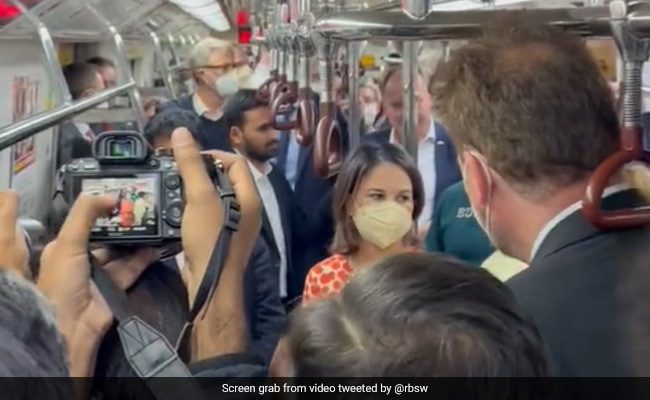 The video shows Ms Baerbock surrounded by her security entourage

Germany’s Foreign Minister Annalena Baerbock who is on her two-day visit to New Delhi took a ride on the Delhi Metro on Monday. A video of her travelling in the Delhi metro has surfaced on the internet. Posted by Richard Walker on Twitter, the caption of the video reads, “Riding the Delhi Metro with Germany’s foreign minister.”

The German foreign minister took a metro ride from Mandi House to the Red Fort. The video shows Ms Baerbock surrounded by her security entourage as she makes her way through a metro station in New Delhi. In the video, people can be seen making videos and photographs of the minister.

“A warm welcome to German Foreign Minister @ABaerbock as she arrives in New Delhi on her first official visit. An opportunity to exchange views on regional and global developments and review the progress achieved in the India-Germany Strategic Partnership,” Ministry of External Affairs Spokesperson Arindam Bagchi said in a tweet.

According to the press statement released by German Embassy to India, during the two-day visit, Baerbock will talk with her Indian counterpart, S Jaishankar to discuss India’s relationship with China in addition to the Russian war against Ukraine and its consequences, for example in the energy sector.

Germany’s Foreign Minister visit is planned against the background of the global consequences of the Russian war of aggression in Ukraine.

Cooperation in the energy transition away from oil, coal and gas will also play a role, a spokesman for the Federal Foreign Office said on Friday in Berlin. In this context, Baerbock will visit projects for renewable energies and sustainability in the rural surroundings of the capital New Delhi, the statement reads.

According to the spokesperson, the minister will also visit the Indian election commission. Meetings are also planned with representatives of civil society and non-governmental organizations working for women’s rights.

The spokesperson added that the minister will also participate in a trilateral India forum of the transatlantic foundation German Marshall Fund, which is about cooperation in the Indo-Pacific region. The forum is an annual meeting of American, European and Indian experts from politics, think tanks and business at different locations. It has developed into a leading platform for transatlantic and European dialogue with India, the statement added.

Exit Polls: BJP Set to Break Own Record In Gujarat