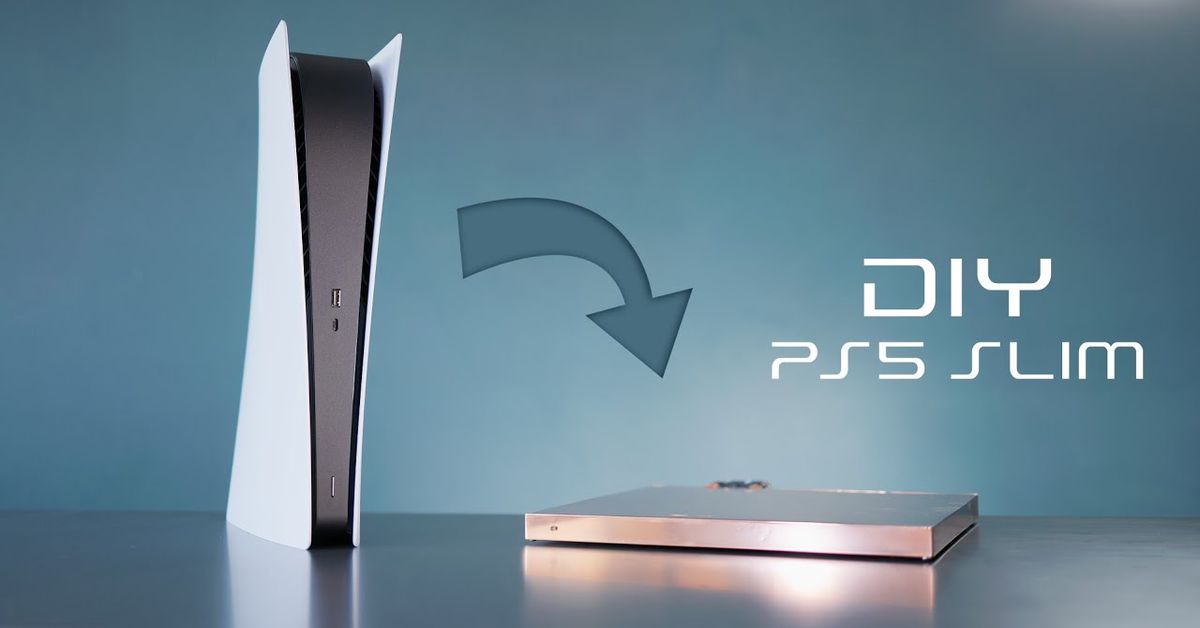 The PS5 is a giant console, the biggest in modern history, and a DIY YouTuber has now created a PS5 “Slim” model that’s a fraction more than the thickness of the plastic cases that house PS5 games. Matt Perks, known as DIY Perks on YouTube, has spent a considerable amount of time and effort to create a PS5 “Slim” that brings the size down from nearly four inches to just under an inch.

The result is a slim copper console that contains the key PS5 components, and a rather giant external power supply and cooling solution that can be hidden away. Most of the thickness of the PS5 comes from its cooling heatsink and power supply, so DIY Perks relocated those into a long external unit to make the actual console far more attractive on top of a TV stand.

A custom water cooling system replaces the PS5’s existing cooling solution, and makes use of copper sheeting to channel water over the CPU. This sheeting also includes several thermal bridges to help cool components like the SSD and power circuitry that are attached to the PS5’s motherboard.

While Sony has lowered the power consumption of some previous PlayStation models to create slim versions, that’s a little out of reach for DIY and modding. Instead, DIY Perks went the route of the PS2 or PS One slim models by creating an external power supply.

This external power and cooling unit resulted in disaster at first, frying the motherboard of the PS5 because the unit fell over and blocked air-flow to effectively cool the console. After swapping the motherboard out, the PS5 “Slim” successfully boots and plays games as you’d expect.

Perhaps unsurprisingly, this custom cooling solution also results in some temperature improvements for the PS5. DIY Perks measured big improvements in RAM and VRM temperatures, and notes that temperatures could be further lowered with an even bigger external cooling unit.

While some will call the enormous power and cooling unit cheating, the entire project is still a fascinating 30-minute journey into the trial and error of modding consoles. The custom copper water block is impressive in how simple DIY Perks makes it seem, built using a jigsaw and regular tools. Thankfully, scalpers probably won’t put nearly as much effort into making the PS5 “Slim” a reality on eBay any time soon.