The metaverse will make your meetings worse 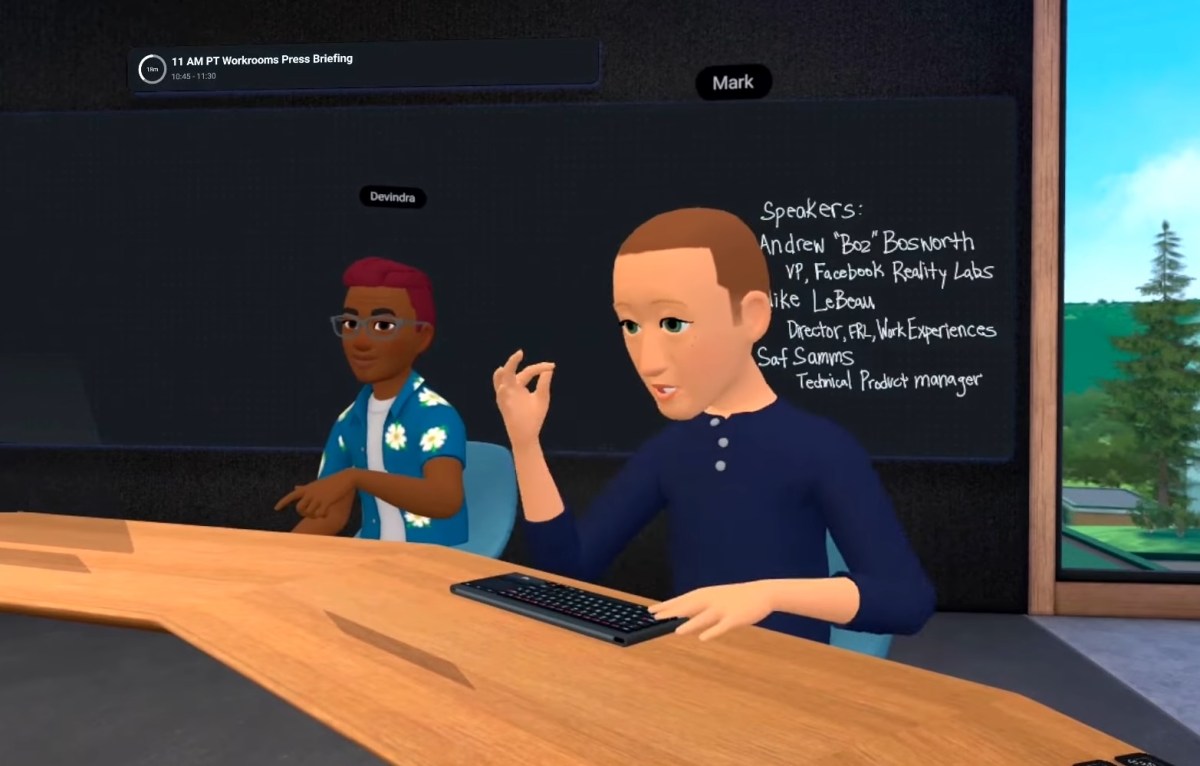 As part of its recently announced rebranding, Facebook is doubling down on its vision of the metaverse, an immersive virtual-reality environment for gaming, work meetings, and socializing. In promotional materials, Mark Zuckerberg and his friends enter the metaverse via the company’s own Oculus headsets, and are transformed into cartoon-y animated torsos, often while arranged around a virtual boardroom.

According to Zuckerberg, the metaverse promises an at-work reality better than our own, with lush backdrops and infinite personal customization (as long as that customization stops at the waist for humanoid characters). Borrowing elements from world-building games and environments like Second Life and Fortnite, and inspiration from science-fiction referents like Ready Player One and the Matrix, the insinuation is that working within the metaverse will be fun. (This despite the irony that all of these virtual worlds are positioned as dystopias by their creators.)

Assuming the metaverse is the future of work ignores both decades of research into human interactions and the results of our collective experiences with remote work over the past two years. We need technology to help us bring others into our remote physical spaces. Virtual avatars instead leave us disoriented, without a physical space at all.

Body language helps us communicate an immense volume of information with each other. Meetings and interactions that take place in a specific location — and include environments with physical objects — are more easily remembered; research on the retrosplenial cortex has demonstrated that memories are inextricably linked with physical locations. Zoom fatigue is real, not least due to mismatches in eye contact and the constant presence of one’s own image. But the solution is not to move to a cartoonish virtual reality. Unrealistic representations of nonverbal communication, like metaverse avatars’ arm gestures that don’t match up with speech patterns, will limit our real-time understanding of each other.

Anonymizing avatars, as innocuous as they seem, can also have real emotional impacts. The visuals of real life — such as surprise appearances by Allison’s cats and Betsy’s young child on video calls — can provide workers with much needed comic relief that will be lost behind a headset. More worryingly, communication mediated by the anonymizing shield of a virtual avatar increases outrage and antisocial behavior, a phenomenon that Facebook should be long familiar with. Employers are unlikely to hop on board the metaverse if it brings out the worst in their employees.

Moreover, in-person meetings aren’t going away; not least because face-to-face interactions are associated with greater quality of life. Many jobs aren’t going fully remote, and many workers intend to go into the office at least a few days a week. Given the choice between holding a hybrid meeting that allows participants to interact with remote and physically present coworkers alike, and asking everyone to join a glorified Zoom from inside a helmet, the choice is clear. Meetings with more complex or relationship-based goals are better conducted in person, and studies comparing video, avatar, and audio-only meetings show that participants find video more compelling and more professional than avatars. There is a reason that remote workers still feel the need to have some sort of “face time.”

So should we give up and retreat into our video-call-induced lethargy indefinitely? We think not. There is another model for virtual interactions; just think back to the holograms of Star Wars. Many of the most captivating sci-fi examples of virtual communication don’t involve putting on a headset and shutting out the outside world for a cartoon one. They involve a projecting device that brings others’ presences into your physical space.

Rather than having remote workers attend a meeting in the metaverse as a dragon or a mermaid and giving up body cues as a result, an ideal remote work tool would project a version of the remote worker into another physical location, while still allowing live participants to see the real world beside them. The remote worker could fully participate in the virtual boardroom, nonverbal cues and all, without requiring their coworkers to lose their ability to notice a friend passing by their door or see the sun setting outside the window.

Like casinos that insulate gamblers from external signs of passing time, metaverse meetings shut out any indications of work or play happening outside of them. That may be good for Facebook’s advertising model, but it’s not good for work. We instead need to recognize that hybrid work environments are here to stay and build tools designed to help all of us navigate them.

Allison Berke is the Director of Advanced Technology at the Stanford Institute for Economic Policy Research.

Betsy Cooper is the Director of the Aspen Institute’s Tech Policy Hub.