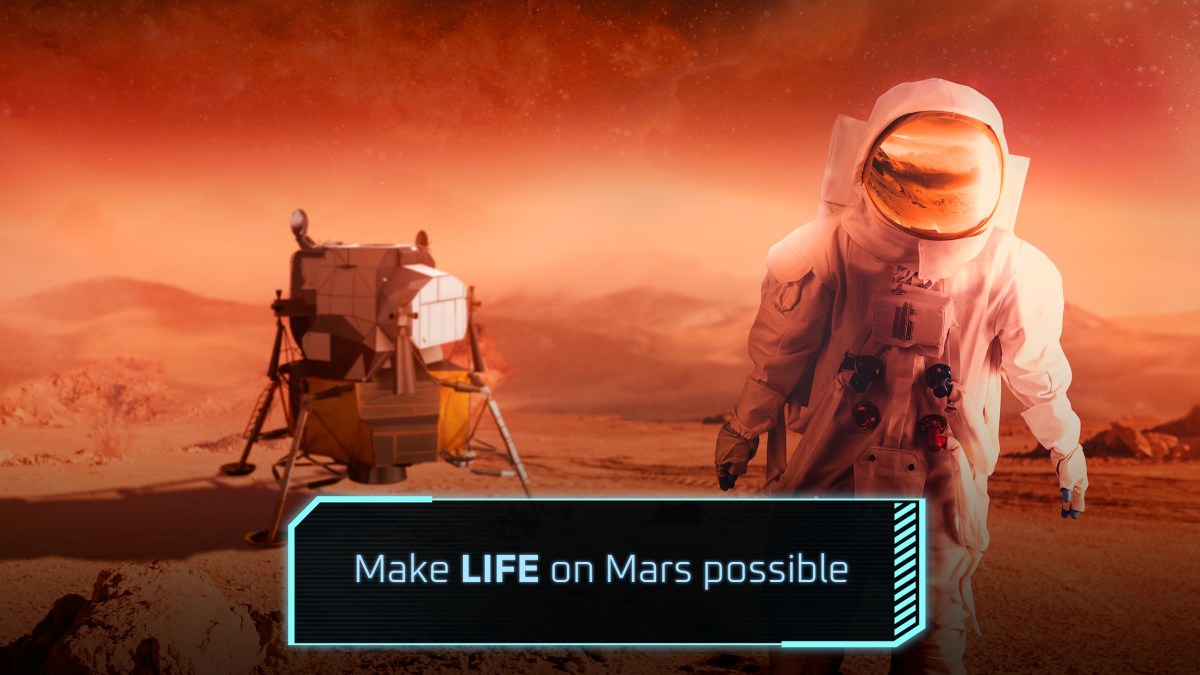 TerraGenesis developer Alexander Winn has just launched the sequel to the popular mobile title. Called Operation Landfall, the new game takes the terraforming concept of its predecessor and puts players a lot closer to it. GamesBeat spoke with Winn about working on his sequel and how player requests led to its creation.

The original TerraGenesis: Space Settlers launched in 2016 with Winn’s company, Edgeworks Entertainment. Winn began working with Tilting Point in 2017 to launch the title on Android, and Tilting Point acquired the game in 2020. TerraGenesis has over 22 million downloads at last report.

Winn announced the successor, called TerraGenesis Landfall, earlier this year. While the original game allowed players to terraform entire planets, it did so from a gods-eye perspective. Landfall, on the other hand, brings players right down to the planet’s surface and immerses them in the nitty-gritty of setting up a settlement on the planet. It’s inspired by and rooted in real science from NASA.

GamesBeat spoke with Winn about his new project and what brought it about. We also discussed how different the development process was between the two sims. Here’s an edited transcript of our interview:

GamesBeat: So I understand you’re working on a new project?

Alexander Winn: Yes, indeed! TerraGenesis: Operation Landfall — which, by the way, you may hear me refer to as TerraGenesis Landfall because that was the title until quite recently. Operation Landfall is a new game on iOS and Android, coming out soon. It’s a survival city builder that allows you to build outposts on Mars, the Moon, Venus and more worlds to come.

GB: What happened after TerraGenesis’ launch that led you to this point?

Winn: TerraGenesis was a wild ride. I made it by myself in my spare time, and it was actually the 25th app that I ever made. Then I released it, and I moved on to the 26th. And then all of a sudden, that blew up. We got over a million downloads in our first year. At this point, it’s been six years, and we’ve passed 28 million, I think. It’s been absolutely insane. The first few years were bug fixes and adding features and trying to ride the wave of, ‘Whoa, we actually have a hit on our hands.’ But eventually, it became, ‘What’s next?’ We kicked around a bunch of different ideas.

Ultimately, what we settled on, was really driven by player requests. TerraGenesis is a game where you control an entire planet over the course of thousands of years. And you can build cities, but you can’t see them. They’re just city lights on the surface of your planet.

For six years, players have been saying, “When are you going to let us see our cities? We want to see our cities.” I didn’t know how to do that. I made it by myself. I’m not a 3D modeler or anything like that. That was so far out of my experience. But I’ve learned a lot these last six years. So when we were trying to decide what the next game should be, sort of the obvious answer was one of we made a TerraGenesis game where you could see your cities. That became Landfall, the game we have now. I often refer to it as the prequel to TerraGenesis, because TerraGenesis, again, takes place over the course of thousands of years. This game takes place over the course of weeks or month. More accurately, it’s like you took the first 30 seconds of a game of TerraGenesis and made a whole game about that first act of building your first city. That’s the game.

GB: Other than the perspective shift, what’s different about Landfall?

Winn: One of the ways I described the two games is like we made Civilization, and then we followed it up with SimCity. They’re both strategy games, they’re both about building community and civilization, but the new game is much more intimate in scope. You’re not dealing with the fate of the planet. You’re dealing with running out of oxygen. It’s much more on the ground level dealing with individual people on your planet. You’re bringing them in on rockets five or ten at a time.

Each person is a very valuable resource. We have different types of settlers. You can bring in scientists and engineers and workers, and you’re balancing the makeup of your city. Where do you put your resources? Your people need more food, that’s definitely a priority. But what is the priority between more entertainment and more industrial output? Things like that.

The other thing that this more intimate scope allows us to do is it allows us to really make you confront how hard space is. TerraGenesis was about transforming an entire planet. If you landed on a planet like Venus, which is way too hot and the atmosphere is way too think, that’s something to be fixed in TerraGenesis. In Landfall, you don’t have that ability. You have to deal with this hellish landscape and live in it. That allows us to bring out the flavor of each of these worlds.

Something that was very important to me with both TerraGenesis and Landfall is that they’re both very grounded in realistic science. When you land on Kasei Valles in Landfall and you start building your city, the map that surrounds your city is an actual map of Kasei Valles on Mars. You’re sending rovers out to explore actual craters and actual mountains as they exist on Mars on the Moon or on Venus. We get to bring out the character of these worlds. These are just a generic red rock that so many sci-fi games use. This is Mars. And Mars has very specific conditions that you have to deal with.

Then you go to Venus, which is hot enough to melt lead, and the air is thicker than seawater. That is a whole different set of problems you have to face. Then you go to Mercury, where it’s over 600 degrees F degrees in the day and -300 degrees F at night. These things are real, and now you live there. So that’s the challenge.

GB: What’s it like working with that kind of data? Does that change anything? You’re not working with a fantasy setting. This is an actual place where we could go.

Winn: I’m a huge advocate for working with real science and real history in games and entertainment. It’s what we’ve built our company, Edgeworks Entertainment, around. It has a dual effect. The first is that it makes things a lot easier. When I was making TerraGenesis and the region maps in Landfall I didn’t have to hire a map designer. I just went to nasa.gov and downloaded a map of Mars. Done. Level design becomes incredibly easy, because you just use what’s there. A lot of the assets and challenges are presented to you almost on a silver platter. You just have to integrate the fact. That makes the game design process really easy.

But at the same time it makes it hard because these are not the kind of places where a sane person would want to live. You as the game designer have to put on your NASA hat and say, “Okay, so how would we live on Venus?” Would would it take to live on Venus? You have to design fictionalized-but-grounded and realistic takes on how we would solve that problem. It’s been a lot of fun to have that scientific focus, because it offers a guiding direction.

Games fundamentally are about restriction. That is what an interactive experience. We could just let you kill the bad guy, but we’re not going to. We’re gonna put little bad guys in front of him. And we’re gonna make the map really hard. And we’re gonna add puzzles and all this stuff. The whole process of game design is about challenge, and space is so full of challenges. It’s like you’re being handed a lot of the game design. Now you just have to make it fun. That is a really fun challenge on our side as well as on the player side.

GamesBeat: What has the reception to TerraGenesis been like, overall? Both the original and Landfall?

Winn: It’s been amazing. We’ve soft-launched [Landfall] in a couple of countries to test for bugs and all that, and the response has been really great. We’ve announced the game and shown off some screenshots and a trailers to the TerraGenesis audience and they are going nuts. I’m super-excited with how they’ve been responding. As for the response to the original TerraGenesis, it was like being struck by lighting. I did not expect that game to blow up the way it did. I was so excited and also terrified. It really felt like five or six years of laying the tracks down in front of the train. This huge audience were so excited for what we had done and they wanted more, so it was adding more playable worlds and more scenarios and more mechanics. It was an incredible ride. And I’m really excited to reconnect with that audience with Landfall.

Winn: The obvious answer is the game itself. They’ve been clamoring for six years that they want a TerraGenesis game where they can see their cities and place their buildings, and that’s this game. The number one thing that I’m excited about is the fulfillment of this dream that the players have been having for so many years. But in terms of specific mechanics within Landfall, I think it’s going to be the environments. The team has done a such a good job of coming up with random events that can happen on other planets and resources that you can find on other planets. Space is incredibly exciting on the one hand, but on other hand … it’s a dead rock. You land on the moon, and it’s like, “Okay, cool, but there’s not actually that much to do other than what you came to do.” On Earth, there’s weather, there’s life, there’s all sorts of stuff. That just doesn’t exist in space. There was a period where we were struggling to figure out what exactly you’re going to find on the surface of Venus (other than just more rock samples). The team has done a great job of coming up with cool ideas.

One of my favorites is from the surface of Venus. Venus is a very Earth-like planet, but it’s incredibly hot. It’s hot enough to melt lead on the surface. The clouds are made of sulfuric acid. Lighting strikes constantly. It’s a nightmare. We were kicking around ideas, and I think the original idea was from my wife and co-founder, Lacey Hannan. She came up with this idea that, when lightning strikes sand, even here on Earth, it can form glass, and that lightning glass can be a prized commodity. She said, “Wouldn’t it be interesting if Venusian glass became a resource that people wanted? This golden sand from Venus created by the constant lightning strikes that you can actually go out and gather on the surface, and it will become a luxury item throughout the solar system?” I said, “Yes, that’s amazing!” So now we have a Venusian glass mechanic on Venus. Things like that bring to life not only the world as it exists right now, but the world as it exists right now, but the world as it could exist when people get there. That is the most exciting part of space exploration for me: What is it going to be like when we get there? I think this game does a really good job of bringing that flavor out.