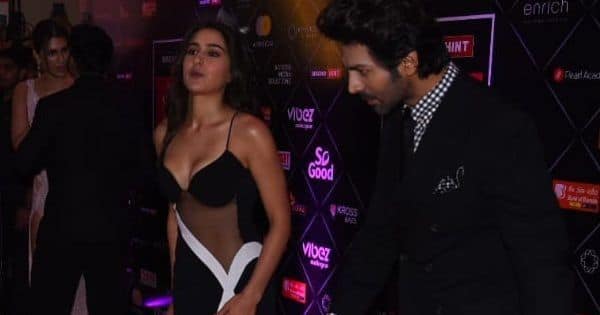 Once there was a spark between Kartik Aaryan and Sara Ali Khan, but now it’s done and dusted. The two were rumoured to be in a relationship when they were shooting for Love Aaj Kal 2. When the movie tanked at the box office, they were never seen together. After a long time, Kartik and Sara came under the same roof for an event wherein they posed together for photographs. However, netizens found their meeting quite awkward. – Katrina Kaif, Sara Ali Khan, Malaika Arora and more celebs who were caught flaunting hickeys and love bites in public

As the two came face-to-face on the red carpet, they exchanged pleasantries. When they tried to walk off, the shutterbugs insisted them to pose together. Kartik and Sara couldn’t help but gave in to their demands. However, they maintained some distance between them. The awkwardness on his face was quite visible. While Sara wore a bold transparent thigh-high slit dress, Kartik looked dapper in a black suit. – Kartik Aaryan’s conversation with this little underprivileged girl is winning hearts; fans call him ‘best human’

“How awkwardly they are seeing each other,” one netizen wrote. Another one commented, “Why @saraalikhan95 gives so much attitude??? To kartik Pls watch bhulaiya mam Then apko pata chalea @kartikaaryan ka stardom king.” However, there were many shippers who were elated to see them together. “I knew they were always made for each other,” one wrote while another followed, “Long waited for this oh my godddddd ????? my sartik.” – Trending OTT News Today: Kartik Aaryan’s Bhool Bhulaiyaa 2 digital premiere date, Pankaj Tripathi shares vital DEETS about Mirzapur 3 and more

Recently, the two came face to face for the time after their rumored breakup. So when Kartik was asked about his link-up with Sara, the Bhool Bhulaiyaa 2 star gave a cryptic answer, which has again sparked speculations about their rumored relationship.

“No, no. There was nothing promotional there. How do I explain this? No dear, I mean, we are humans as well. Not everything is promotional. This is all that I will say on this topic,” Kartik told Navbharat Times during his recent interaction.

On the work front, Kartik is busy with the promotions of Bhool Bhulaiyaa 2 which is slated to release on 20th May 2022. The horror comedy also stars Tabu and Kiara Advani in the lead roles. Apart from Bhool Bhulaiyaa 2, Kartik will be seen in Freddy, Shehzada, and Sajid Nadiadwala’s next production venture. Meanwhile, Sara will be seen in Laxman Utekar’s next and Gaslight. The former stars Vicky Kaushal as the male lead and the latter also stars Vikrant Massey in the lead role.