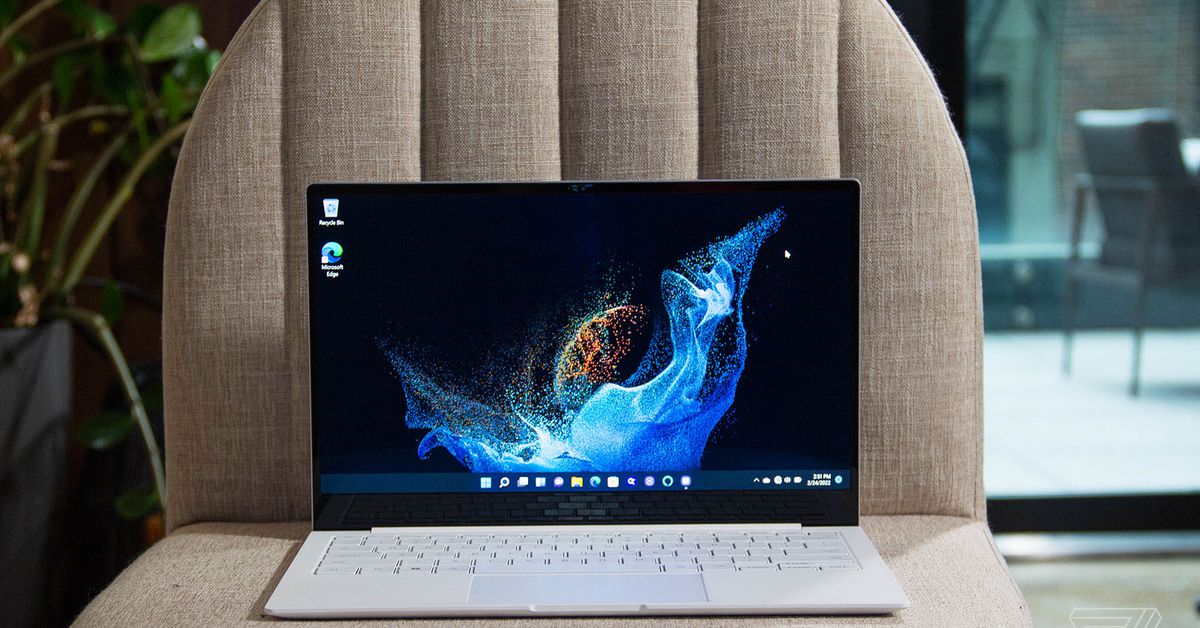 These devices look and feel pretty similar to the Galaxy Book Pro and Galaxy Book Pro 360 models we reviewed last year. Like its predecessor, the smallest Galaxy Book 2 Pro is just 1.92 pounds and 0.44 inches thick. It’s still one of the absolute lightest clamshell laptops you can buy, and picking it up really messes with your mind. But it also makes remarkably few compromises for that portability. In particular, the 15-incher manages to squeeze an HDMI port into that tiny chassis. Many laptops of this size are now exclusively USB-C. (The 360 model is, as you’d anticipate, a bit heavier.)

The primary chassis update is that all the new models feature 1080p webcams. There are also some new software features meant to enhance the video-call experience, including some new background and face-effect features, as well as an Auto Framing tool that keeps you centered as you move around. This is a fairly predictable investment as more workers continue to embrace remote and hybrid setups.

The displays (all FHD AMOLED) are also brighter than they were on last year’s models. I wasn’t floored by the brightness on either of the 2021 Galaxy Book Pros, so I’m happy to see this change. I did catch some glare from the bright lights in Samsung’s demo area, though I didn’t have trouble seeing anything on the screens. Unfortunately, all of these devices still have the cursed 16:9 aspect ratio, which many other premium lines have moved away from this year.

The Pro convertible is also available in a new burgundy color, in addition to graphite and silver. It’s very pretty in person and feels smooth, though the graphite offering is still my favorite.

These devices can be configured with up to a 12th-Gen Core i7, 32GB of RAM (the Book 2 360 maxes out at 16GB), and 1TB of storage (the Book 2 360 goes up to 512GB). Samsung says they’ll be certified through Intel’s Evo program (which means that Intel vouches that a device’s performance, battery life, and other important features are up to snuff).

The Pro models meet Microsoft’s “secured-core PC” requirements, which means that they include various hardware-based security components like TPM 2.0 and virtualization-based security, as well as features consumers might care more, about like biometric authentication. (Both of these devices have fingerprint sensors in their power buttons.)

And both Pro models support a few Samsung-specific connectivity features, which has always been a major draw for Galaxy Books among Samsung enthusiasts. These include Single Sign-on, Smart Switch (which makes it easier to transfer data, photos, settings, etc. between PCs), and support for the SmartThings smart home dashboard.

An interesting addition is Multi Control, which allows you to use a Galaxy Tab S8 as a secondary screen alongside a Galaxy Book 2 Pro. I got to try this out with a 15-inch Book 2 Pro 360, and it was functional; I could successfully move the cursor back and forth between the two Galaxy devices, dragging windows and such. I did experience some significant lag when navigating on the Tab S8 — the cursor seemed like it was having trouble keeping up with my gestures, though it did eventually follow them. This is something I hope Samsung irons out as the release date approaches.

Stay tuned for our full reviews of these devices, where we’ll have more impressions of the new webcams and software features.