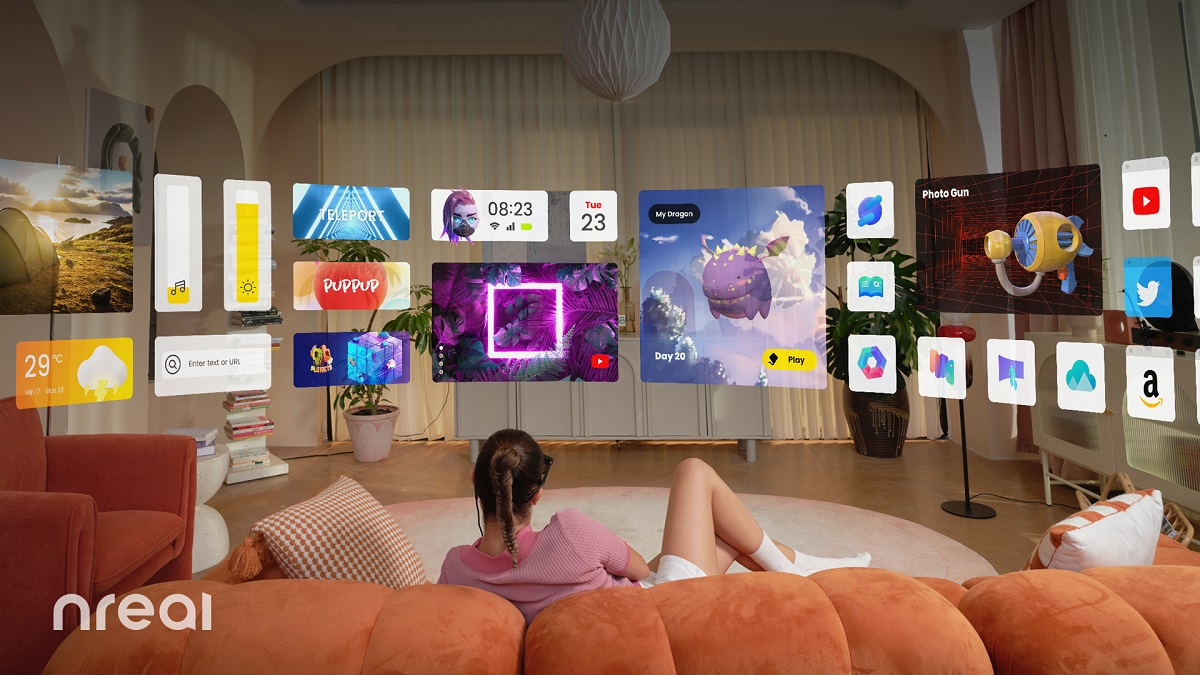 Nreal has launched Nreal Air augmented reality glasses in U.S. on Amazon for $379. For an extra $59 it will come with an adapter that enables it to work with an iPhone.

The consumer-focused AR glasses also feature a redesign of Nreal’s Nebula AR operating system and Nebula for the Mac. Nreal said the Nreal Air will have a fashionable look and a consumer-friendly price — something that has been elusive for earlier generations of bulky AR glasses.

Nreal Air is launching two years after Nreal Light first hit the market for developers in August 2020. Nreal wants to push the boundaries again with the Nreal Air to reach more consumer groups with the introduction of a highly fashion-forward design.

Nreal Air’s sunglasses-style design won the company an iF Design Award 2022. In comparison with Nreal Light, Nreal Air embraces more consumer-friendly optimizations that are intended to be enjoyed by users who consume entertainment anywhere, anytime.

These updates to Nreal Air include an improved light engine, a 25% reduction in weight and 50% less power consumed at a 40% lower recommended retail price than Nreal Light, which retails at $600.

Nreal tried to balance design and efficiency in its approach. Nreal Air deliberately features an industry-standard 46° FOV and 3DoF (three degrees of freedom). This makes way for an improved light engine and higher pixels per degree for a crisper video and image quality — in contrast to Nreal Light’s 52° field of view (FOV) and 6 degrees of freedom (DoF) tracking.

Nreal Air AR glasses have also marked a world-first as the only device in the XR field to obtain TÜV Rheinland Group’s Low Blue Light (Hardware Solution), Flicker Free and Eye Comfort certifications. Among these, Eye Comfort is the highest level of certification that assesses the display quality, environment lighting system, eye protection technology, as well as users’ health and comfort. The certification even considers how the device is configured for nearsighted lenses. To date, only 216 display devices globally, including computers and monitors, have ever received the Eye Comfort award.

With these conscious adjustments, Nreal Air is carving out a new category of consumer-minded AR glasses that offer more portability and convenience, with a fashionable design. And it also covers the vast majority of ways AR applications are most frequently used day-to-day, including gaming, web browsing and media consumption.

To bring the mobile theater experience to iOS users, Nreal is introducing its Nreal Adapter, which connects to any iPhone via an HDMI-to-Lightning dongle. While Nreal’s AR operating system, Nebula, runs on Android-based devices, the Nreal Air experience on iOS will only offer screen mirroring at the outset, and enables users to enjoy popular streaming services such as Netflix, Disney+, HBO Max and Hulu. Users can also browse TikTok on the go or from the comfort of one’s home through Nreal Air’s 130″ screen and superior display technology.

In addition, Nreal is introducing a Mac version of Nebula for all MacBook Pros and MacBook Airs powered by Apple chips. Once plugged in, a virtual UI called AR Desktop will launch and project multiple virtual displays mid-air, turning a single notebook into a multi-window workstation.

“AR glasses will likely first emerge into people’s lives as a display technology and then gradually grow into a holistic experience. That is why the thinking behind Nreal Air is very focused on the aesthetics, display quality and its connectivity with other hardware devices,” said Peng Jin, cofounder of Nreal, in a statement.

Together with the launch of Nreal Air’s hardware, Nreal is also announcing the biggest update to Nebula to-date, starting with a completely redesigned AR Space — the first personal AR portal Nreal users see upon opening Nebula. The new interface sports a borderless curved wall design and a highly interactive menu with animated 3D icons. Meanwhile, a new widget feature pushes recommended content to users, and also allows them to preview or even access the application directly from the AR Space interface, without the extra step of opening the application.

Nreal’s own browser, Spatial Browser, has also undergone a complete makeover, which now offers the option between two display modes: horizontal mode for multi-window browsing and vertical mode for sites with waterfall designs (such as Pinterest or online comic books).

In conjunction with the launch, Nreal is unveiling several new casual games, and two applications from XRay Studio that showcase AR-exclusive experiences.

Teleport, the first of XRay Studio’s applications, combines the virtual with the real world. Users can jump through 3D models of real world structures scanned by their smartphones. Once inside these digitized structures, users can leave photos, text, and even voice messages and interact with other users in the same virtual space. The app will be made available to global users later this year.

“Teleport represents our focus on including as many people as we can in creating interesting content that can be enjoyed both on mobile phones and AR glasses. There is something very special about placing people in a digital replica of a real-life environment where they can freely move around as they would in real life. That sense of familiarity exhibits the beauty of AR,” said Jin.

Finally, both casual and hardcore gamers can enjoy the best gaming experiences on Nreal Air with Nebula’s Mirror Mode. With a virtual screen as wide as 130 inches, both casual gamers that primarily make their iPhone or Android phones their gaming device of choice, and hardcore gamers that prefer devices including Steam Deck, Switch, Xbox or PlayStation can enjoy an immersive gaming experience. In fact, in AR mode, Nreal Air’s screen can be enlarged to 200 inches and anchored in space, making it an ideal portable gaming setup for cloud gaming services like Xbox Cloud.