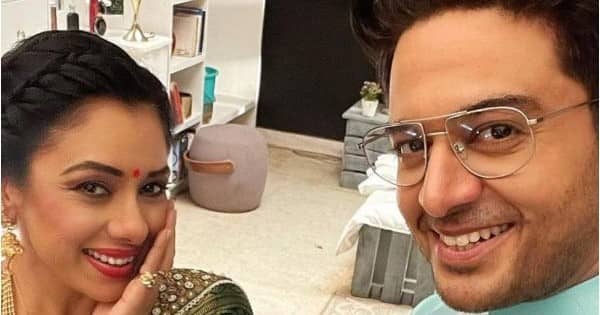 Anupamaa is one of the most popular television shows right now. The show stars Rupali Ganguly and Gaurav Khanna in the lead roles and it has been ruling the TRP charts for the past many months. Well, currently, the track is focused on a lot of drama that’s happening between Shahs and Kapadias and little Anu’s entry has surely made things interesting. However, MaAn fans have been missing the cute romantic moments between Anupamaa and Anuj. But, it looks like their wait might come to an end soon. – Pathaan star Shah Rukh Khan shows off his amazing dance moves on the song Na Ja; video goes VIRAL [Watch]

According to a report in India Forums, in one of the upcoming episodes, MaAn fans will get to see some cute romantic moments between Anu and Anuj. Giving a hint about the romantic scenes, the makers shared a few pictures on their Insta story and we can surely expect that Rupali Ganguly and Gaurav Khanna are all set to steal the show with their amazing chemistry. – Trending South News Today: Liger first movie review out, Sita Ramam actress Mrunal Thakur gets emotional, Samantha Ruth Prabhu all set for Mollywood debut and more

– Vikram Vedha: Teaser of Hrithik Roshan and Saif Ali Khan starrer to be out on THIS date; fans can’t keep calm [View Tweets]

Meanwhile, the new promo of Anupamaa has created a huge buzz in the entertainment news. It has hinted that Anuj will meet with an accident and he will get paralyzed. The show will focus on how Anupamaa with little Anu manages to tackle both the families, Shahs and Kapadias.

Well, Anupamaa has been in the news for the past few days due to Paras Kalnawat’s exit. The actor’s contract was terminated as he decided to be a part of Jhalak Dikhhla Jaa. While makers had shared a statement about it, Paras too spoke about his exit in various interviews. He made many revelations about the show and his co-stars.

Sagar Parekh has replaced Paras Kalnawat in the show, and BollywoodLife had exclusively come to know that the actor has started bonding with the other actors of Anupamaa very well. We are sure Paras’ fans will miss him as Samar, and it will be interesting to see what will be audience’s reaction to the new Samar.