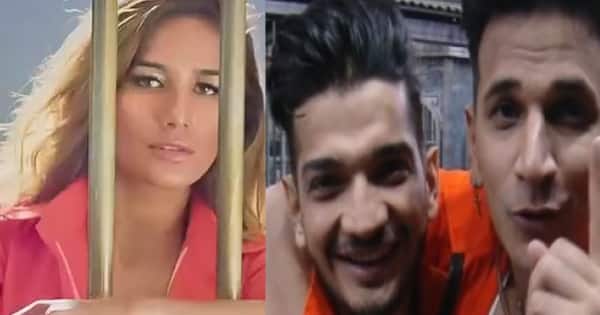 Lock Up is currently the HOT topic of discussion. Kangana Ranaut’s reality show is keeping everyone hooked to the screens. With contestants like Poonam Pandey, Saisha Shinde, Prince Narula, Munawar Faruqui and others – Lock Upp has managed to decently entertain the public. Now, here’s the show going to the next level. In a recent episode, Poonam Pandey bathed openly in the yard area. It all started with Shivam Sharma who decided to take bath in the yard area instead of the bathroom. – Shah Rukh Khan’s son Aryan Khan to NOT make his directorial debut with Amazon Prime Video? This is what we know

Shivam Sharma got a bucket of water and took bath wearing his trousers. However, after being provoked by Saisha Shinde, Poonam Pandey, and Payal Rohatgi, Shivam took his pants off and bathed in his innerwear. It seems Poonam Pandey got inspired by Shivam’s act and decided to do the same. Saisha then went inside the Lock Up to inform everyone else about Poonam’s act. Prince Narula and Munawar Faruqui could not stop making fun of it. – Ajay Devgn speaks on Bollywood’s silence on several matters; says, ‘Something bad happens in the industry, then the entire industry is ab***h”

Munawar was heard saying, “Uske jaane ke chances badh gaye, Poonam ke kyunki makers ko o chahiye the woh unko mil gaya, ab Poonam aap jaa sakte hain, kyunki humein joh chahiye tha woh mil gaya.” To this, Prince added, “See, all those men who want to see Poonam will keep voting for her till the end. They will always vote for her because they want to see what she will do next.” Later, they both joke that the makers will give Poonam Pandey the trophy much before the show ends as why to waste everyone’s time? – BTS: When Jungkook got territorial with ARMYs gift hampers and didn’t want to share with the rest of the members

Nobody went into the yard area when Poonam Pandey was taking bath and neither it was shown by the makers.