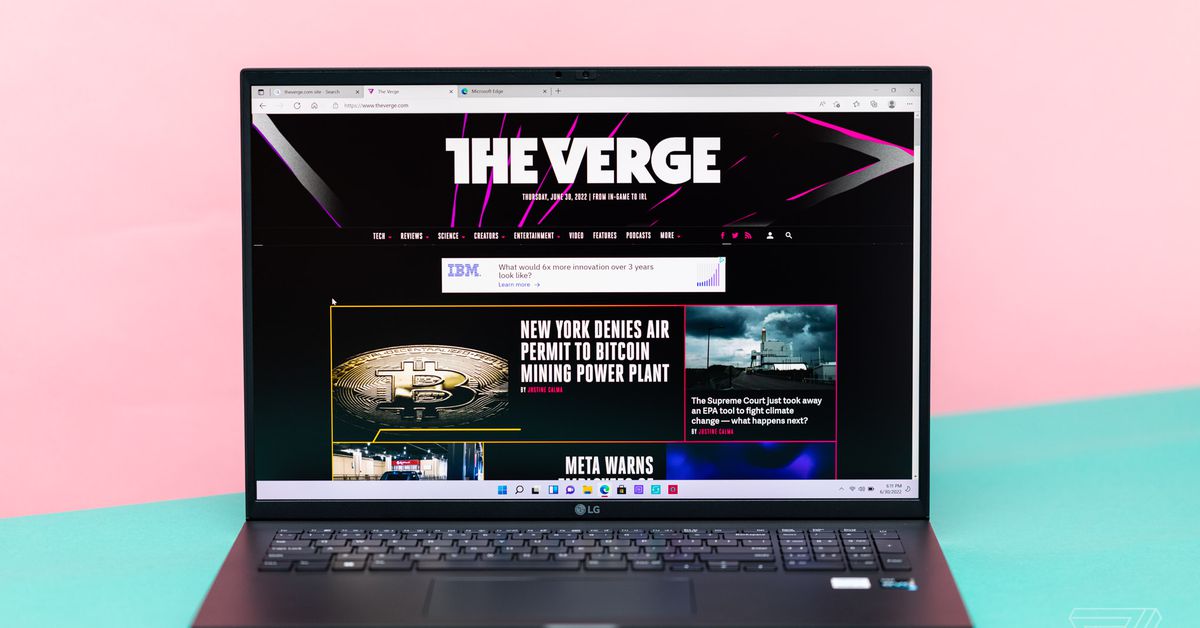 This latest Gram 17 is no exception. At 2.98 pounds in a 17-inch chassis, this is without a doubt one of the lightest and longest-lasting laptops in the big-screen sphere. It achieves that combination without asking a fortune in price — my unit (with a 12th Gen Core i7-1260P, 16GB of RAM, and 1TB of storage) is currently listed at $1,799, but Grams are available for as low as $1,599. Those certainly aren’t cheap prices, but they make the Gram miles more affordable than the XPS.

For those seeking the extra space of a 17-inch screen without the extra weight that comes with many big-screen rigs, the LG Gram remains the unambiguous choice. While the product has its limitations (especially when it comes to performance), there’s really nothing else like it on the market. Here’s what you can expect if you buy the thing.

The primary draw of the LG Gram 17 is that it’s under three pounds. I cannot overstate how light this thing feels. When you pick this up, it feels like you’re picking up a hollow chassis with nothing inside. I would sometimes worry that I’d forgotten to put it in my backpack when I was carrying it around. This thing is light.

(I will add, just so you’re not misled, that the Gram’s thinness is not as exceptional — at 0.7 inches, it’s not too far off the thickness of the XPS 17. But if you’re going for a 17-incher, I don’t imagine that backpack space is your biggest concern.)

Then you open this device up, and it’s screen all the way down. So much screen. I don’t have all that much to say about this part of the laptop that the phrase “17-inch” doesn’t already imply, but just for the record — it’s lovely to have this much space. I can have two or even three windows and apps open at a time. I can zoom all the way in on the words I’m reading or writing. I can fit so much on this panel that I’m already dreading going back to my 13-inch personal device. The fact that it’s high-resolution (2560 x 1600) and matte, with no glare in sight, is icing on the cake.

The case is probably the weakest part

Other things to know about the Gram:

When it comes to performance, the Gram’s Core i7-1260P is a step down in power from the processor that powers Dell’s machine. Aside from the weight difference, the delta in power is the primary differentiator between the Gram and the XPS. It gives the XPS an advantage in professional workloads and gaming but gives the Gram a huge win in battery life.

The Gram’s battery life was exemplary

The 1260P is more than adequate for office and internet applications, which covers most of my own workload. While the Gram doesn’t have a discrete GPU, it can also lend a hand in content creation if needed. The device scored a reasonable (for integrated graphics) 323 on PugetBench for Premiere Pro, and it completed our typical export test in 10 minutes and 45 seconds (which is slow but not agonizingly so). I wouldn’t, to be clear, recommend this device if you’ll be using Adobe software like Premiere a lot because I generally found it to be a bit unresponsive and slow.

This is also a passable but not great option for gaming. I got 28FPS from Shadow of the Tomb Raider, 13FPS from Red Dead Redemption 2, and 14FPS from Horizon Zero Dawn (all at the highest graphic preset, with resolution bumped down to 1920 x 1200). If you fancy some gaming, you’ll want to bump the settings down on those demanding titles (but lighter stuff, like esports, should be fine).

On the other hand, the Gram’s battery life was exemplary. I got an average of 12 hours and six minutes of consistent work use out of the device with medium brightness, which is the longest lifespan I’ve seen from a non-Apple laptop this year. This is quite refreshing, given that this generation of Intel-powered laptops has been having some… issues on that front.

To start using the LG Gram 17, you’ll need to agree to the following:

You can also say yes or no to the following:

That’s three mandatory agreements and eight optional agreements to use the Gram 17 (2021).

While the LG Gram doesn’t quite have the graphics power that I personally need, I’m very much going to miss using it as my work driver. The extra screen space was heaven, and the weight made walking around with it a breeze. The long battery life was the cherry on top — I never needed to worry about plugging this machine in.

The primary compromises to consider are build quality (if that’s your top priority, the XPS is your choice) and the computing needs of your own workload. If you’re looking for a 17-incher, you don’t mind those compromises, and you don’t mind the slightly steep price tag, then you won’t be disappointed in the Gram.