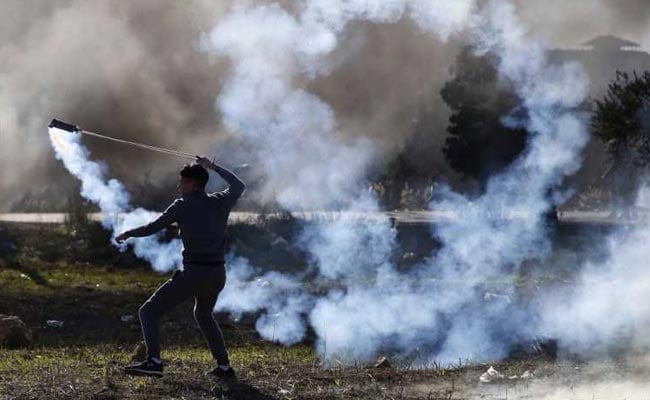 Israeli forces killed a Palestinian man in the West Bank flashpoint city of Jenin Wednesday, in what the army called its latest “counterterrorism” raid following a series of attacks in Israel since late March.

The army said that during the operation at Jenin’s refugee camp, troops used “live ammunition” after being targeted with gunfire and explosives by Palestinian “rioters”.

The Palestinian health ministry identified the man killed as Ahmad Massad, 18, from Burqin village in the north of the occupied West Bank. He was shot in the head, a hospital official told the official Palestinian news agency WAFA.

The army said 12 people were arrested in the overnight raids at several West Bank locations. The Palestinian Prisoner’s Club group put the number of arrests at 17.

More than a thousand people gathered for Massad’s funeral in Burqin, and masked gunmen fired volleys into the air as his body was taken from his family home.

A band with the logo of the Palestinian armed movement Islamic Jihad was wrapped around his forehead.

Israeli security forces have stepped up operations in recent weeks in the West Bank — particularly around Jenin, where there are active fighters from several Palestinian armed groups.

Raad Hazem — who killed three Israelis in a shooting spree in a Tel Aviv nightlife district earlier this month, before being shot dead after a massive man-hunt — hailed from Jenin’s refugee camp.

During the overnight operation, the army said it also delivered a demolition notice to Hazem’s family home.

The destruction of assailants’ homes is a common Israeli practice, and condemned by critics as an illegal form of collective punishment.

The Tel Aviv shooter’s father Fathi Hazem and brother Hamam are both wanted by Israel.

Hours after the demolition notice was handed over, the father appeared in a video that then circulated widely in Palestinian media.

He accused Israel of labelling all Palestinian youths as “terrorists” and told a small crowd, speaking at an unknown location, that “we will defeat them, God willing, and soon”.

Hamam Hazem told AFP earlier this month that the family had no prior knowledge of Raad’s plans for the Tel Aviv attack.

Clashes between Israeli forces and Palestinians are common in the West Bank, a territory occupied by Israel since 1967.

Violence has intensified in the territory and in Israel, at a time the Muslim holy month of Ramadan and the Jewish holiday of Passover overlapped this month.

The mounting violence since March 22 has killed 12 Israelis, including an Arab-Israeli police officer, and two Ukrainians in four separate attacks inside Israel.

A total of 26 Palestinians and three Israeli Arabs have died during the same period, among them the perpetrators of the attacks and those killed by Israeli security forces in West Bank operations.

Massad’s death follows that of another Palestinian killed Tuesday, when Israeli forces stormed a West Bank refugee camp near Jericho.

Violent clashes have also rocked the Al-Aqsa mosque compound in Israeli-annexed east Jerusalem, sparking fears of another conflict after last year’s 11-day war between Israel and armed groups in the Gaza Strip.

Following the Al-Aqsa clashes, isolated rocket fire towards Israel from the Gaza Strip resumed, prompting Israeli reprisals on targets linked to Hamas, the Islamist group which controls the coastal enclave.

Palestinians have been angered by an uptick in Jewish visits to the Al-Aqsa compound, Islam’s third-holiest site. It is also Judaism’s holiest place and known to Jews as the Temple Mount.

Jordan’s King Abdullah II said during a meeting with Palestinian president Mahmud Abbas on Wednesday in Amman that impeding the access of Muslim worshippers in Jerusalem was “unacceptable.”

In an apparent attempt to ease tensions, Israeli Foreign Minister Yair Lapid said Sunday that Israel was committed to the “status quo” at Al-Aqsa, meaning an adherence to long-standing convention allowing Jews to visit the compound but not pray there.

Concerns of fresh Al-Aqsa clashes are building, though, ahead of Friday prayers at the compound, with the end of Ramadan approaching in early May.

The Palestinian armed movement Islamic Jihad in a statement Wednesday called on followers “to escalate the resistance in all its forms”.