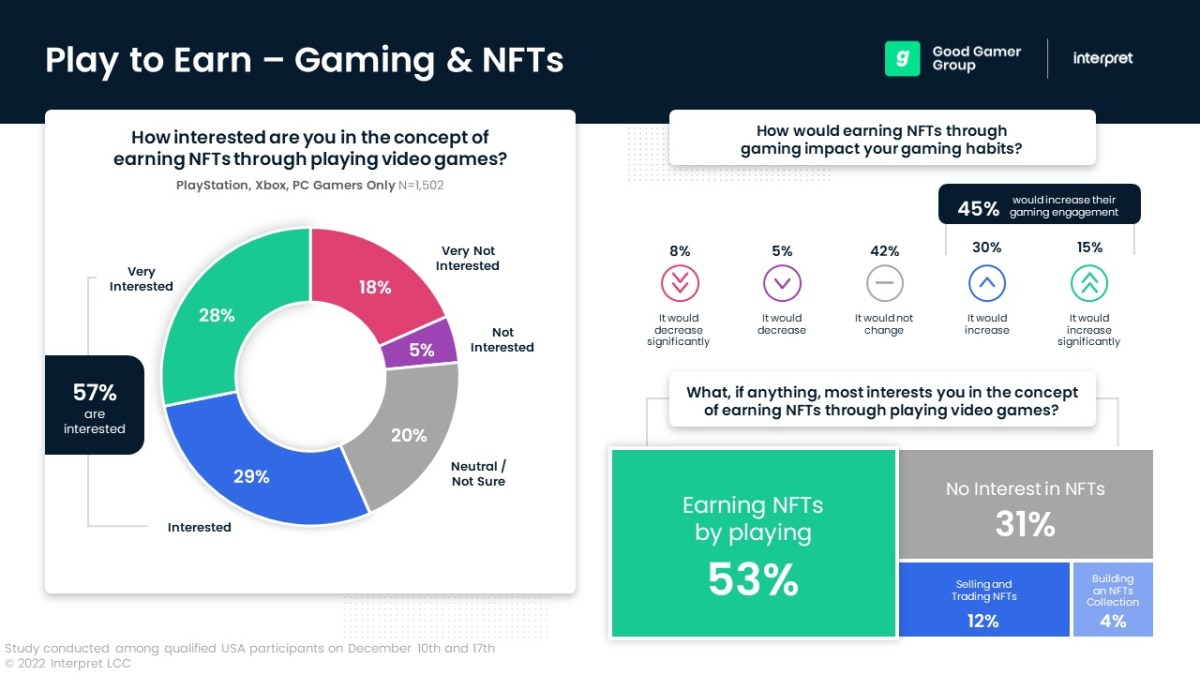 A study of 1,500 console and PC gamers found that 56% of them are interested in earning nonfungible tokens (NFTs) through gaming, according to market research firm Interpret.

That doesn’t mean that NFTs aren’t controversial. In fact, they are, as hardcore gamers have become increasingly vociferous about their opposition to using NFTs, which use the transparent and secure digital ledger of blockchain to uniquely identify digital items. That allows gamers to own NFT items permanently.

Gamers remain concerned that publishers will use NFTs to nickel and dime them through NFT transactions rather than make fun games that games will happily pay for, said Jesse Divnich, senior vice president at Interpret, in an interview with GamesBeat. Gamers are evidently concerned about scams, money laundering, environment effects, and over-monetization — whether those things are accurate or not when it comes to the practices of individual NFT game companies, which have raised a lot of money.

When Ubisoft became the first major games publisher to throw its hat into the NFT ring in December, the gaming community’s reaction was mixed, with many downvoting Ubisoft’s announcement video. Given the experimental nature of their exploration, the French publisher took the feedback to heart and has said that NFTs represent a “major change that will take time.”

More recently, Square Enix president Yosuke Matsuda said in an open letter that the Final Fantasy publisher is also exploring how to implement NFTs in its games. Matsuda believes that NFTs will be particularly useful in boosting user-generated content in games.

EA CEO Andrew Wilson, too, has suggested that NFTs and play-to-earn gaming are the “future of our industry.” Meanwhile, on the retail side, GameStop is planning to create a virtual marketplace where players can buy, sell, and trade NFTs.

While NFTs, cryptocurrency, and blockchain have drawn heavy criticism due to scammers and the environmental impact of crypto mining, there is undeniable interest from gamers that publishers cannot ignore, Divnich said.

Interpret received answers to its survey from 1,502 players. Those players were drawn from a group of 24,160 players. Interpret asked the broader group if they had heard of NFTs, and then it received more than 5,000 positive responses. It asked those players (who were incentivized to respond) if they were willing to earn NFTs in games. The survey ran from December 10 to December 17, 2021.

The panel represents Xbox, PlayStation, Switch, mobile, and PC players “who are interested, are not interested, have previously owned, or currently own an NFT or cryptocurrency.” And 56% said they are interested.

“We try to make sure the panel that we’re talking to is as market representative as possible,” Divnich said. “And then we do it at a large enough size that the noise of the vocal minority, or otherwise, get muted out. We asked people just about this concept of being able to earn an NFT through playing games. So they liked they liked the overall concept.”

Divnich noted that there is a lot of resistance from hardcore gamers in the media and on social media.

Interpret also said that NFTs could play a major role in retention (of critical importance to live-service games), as over 45% indicated that being able to earn NFTs through gaming would increase their current engagement levels with games. Additionally, over 53% indicated that earning NFTs is the primary driver, compared to being able to sell/trade NFTs, and the idea of building an NFT collection.

“Building a collection is not the major motivator right now. Gamers are not yet viewing NFTs as they would Pokémon cards or collecting a complete set of similar items,” said Divnich, who heads growth and innovation at Interpret. “Gamers just want to be able to participate in this new business and engagement model. Currently, becoming an NFT owner is a cumbersome process with numerous steps across multiple systems and programs. Gamers are likely looking to the industry to help create a more streamlined process towards NFT ownership and participation.”

The Interpret report has its limitations. Interpret did not collect qualitative comments from gamers about why they liked or didn’t like NFTs.

Divnich compared the sentiment around “play-to-earn” NFT games, where players can own their NFTs and resell them to others (criticized as ponzi schemes by opponents) to the origins of free-to-play (F2P) mobile games a decade ago. F2P games were greeted with derision by those who didn’t want to pay microtransaction fees for scammy items. But eventually, F2P games became the bulk of the game industry’s revenues, Divnich said. Of course, it is quite possible that players who engage in F2P purchases don’t really like them and remain resentful of the business model.

All of the new business models — like F2P, downloadable content, subscriptions, battle passes or season passes, and full digital downloads — went through murky periods when games resisted them. Gamers were split about these at the time, but eventually they adopted them. Divnich thinks NFTs represent a new discovery, or new way of doing business, and he sees why some are embracing it. But he also expects it will take five to 10 years to filter through the whole industry.

The 56% interest rate is low compared to the current acceptance rate of established models like free-to-play, season passes, or digital full game downloads, Interpret said. But earlier models were unpopular at first as well.

“The business model is here. We’ve discovered it,” Divnich said. “It’s not going anywhere. I totally understand why some people would be upset right now. It’s fine.”

Spiketrap, which monitors social conversations across the entire internet, has helped come up with a separate analysis of some of the qualitative views that gamers have been expressing about major NFT game announcements. Spiketrap found that the context really matters in NFT conversations, as reactions vary wildly by channel and particular news announcements.

“When discussed alongside blockchain technology more broadly or among cryptocurrency enthusiasts, the overall tone is positive,” Spiketrap said. “However, when NFTs are discussed in relation to video games and developers, sentiment, for the most part, sours.”

Twitter conversations are mostly positive over the past three months, and the same goes for Twitch and YouTube Live. But gaming industry news sources have consistently generated the most negative reactions to NFTs, with sentiment scores that are very low. Discussions on forums like Reddit are more balanced.

Across the board, game developers are struggling to elicit positive discussions about NFTs. The conversations around NFTs as they pertain to Activision are exceedingly negative, with a Spiketrap sentiment score of 03/100.