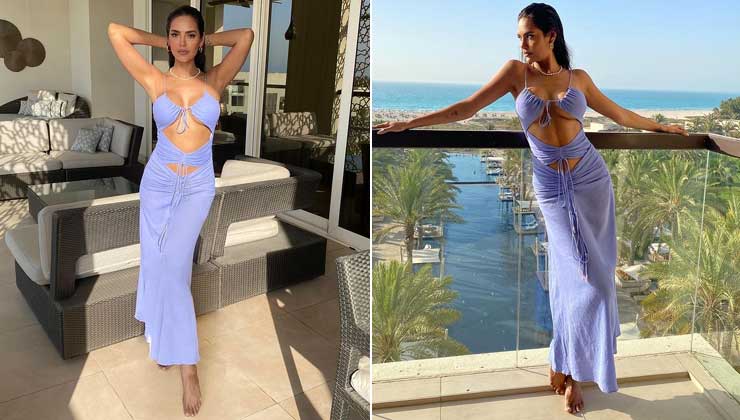 Esha Gupta is one of the most active celebrities on social media. From sharing her selfies, jaw-dropping photoshoot pics to bikini pictures, Esha keeps her Instagram updated. The actress’ pictures always take the internet by storm. Speaking of that, on Sunday, Esha took to Instagram to share a bunch of photos of herself looking hot in a lavender outfit.

In the first picture, Esha can be seen posing with her hands behind her head. In the second and third photo, Esha strikes a sexy pose from the balcony.

Reacting to the post, many fans and followers dropped fire and heart emojis. A fan commented, “Hottest, Another one wrote, “Gorgeous yrrrr.,

A couple of days back, Esha shared a series of sultry pictures in a plunging-neckline dress. The dress also featured a thigh-high slit. The actress also went braless. She raised the temperature with her pictures. Esha rounded off her look with nude heels and minimal accessories.

The actress had also shared pictures looking hot and sexy in a white sheer dress. She wore the sheer white dress over a white bralette. She completed her stunning look with a mini bag and high heels.

On the work front, Esha will be seen in Aashram 3, co-starring Bobby Deol. Bobby returns as Baba Nirala. The trailer was released recently and it received a good response from the audience. The third season is all set to release on June 3. Earlier, talking about the series, Esha told Firstpost, “I think I manifested it unknowingly when I saw Aashram during the lockdown and I wished to be a part of the show. Getting this series was more of a gift from the universe.,