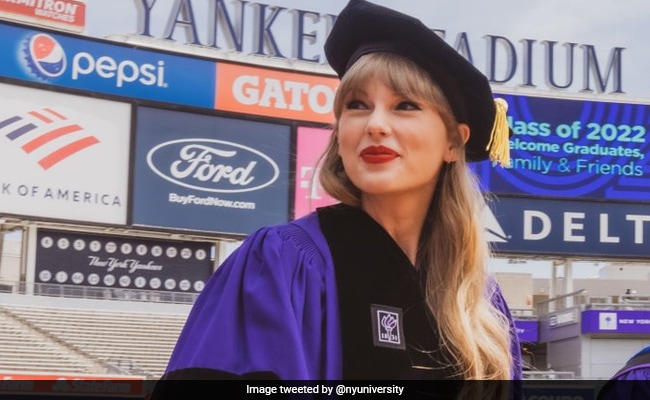 In a life tip to other graduates, American singer-songwriter Taylor Swift, who received an honorary doctorate from the New York University in fine arts, said it’s okay to lose perspective sometimes as everyone will make mistakes. What matters is to learn from those mistakes, she said.

During her commencement speech on Wednesday at New York’s Yankee Stadium, Taylor Swift said, “I know I sound like a consummate optimist, but I am really not. I lose perspective all the time,” reported Elle.com.

Sometimes, Taylor Swift said, it feels like everything is just “completely pointless” but that’s not the end of it.

The 32-year-old, known for hits like Blank Space and Shake It Off, told the graduates that they would make mistakes in life, misspeak with people, trust the wrong people and even hurt those who didn’t deserve it,  the report added. But they will ultimately be able to address the pain they caused and try to do better next time, she told the fresh graduates.

“And I am not gonna lie, these mistakes will cause you to lose things. I’m trying to tell you that losing things doesn’t just mean losing. A lot of the time, when we lose things, we gain things too,” the Grammy winner was quoted as saying.

“Learn to live alongside cringe. No matter how hard you try to avoid being cringe you will look back on your life and cringe retrospectively,” the singer added.

Taylor Swift has also thanked the New York University for making her “technically, on paper at least, a doctor”. Not the one you would want around in case of an emergency, she added quickly.

Taylor Swift’s meteoric rise in the music industry started with her debut album Taylor Swift in October 2006. She followed this with hit singles like Love Story and You Belong with Me.