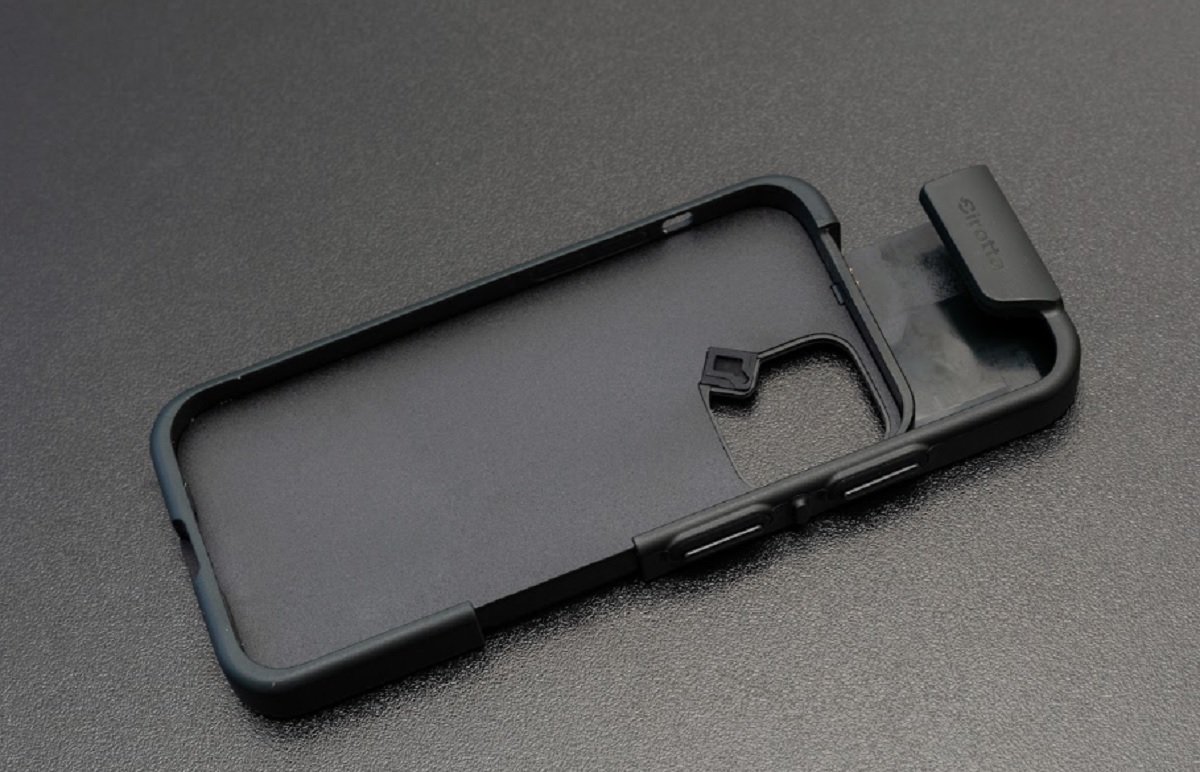 The idea is a novel way to create a physical security barrier between cybercriminals and the data on a smartphone. Tel Aviv, Israel-based Cirottta, which has its roots in the military, said the cases provide complete protection while enabling full operation of your smartphone.

The patented anti-surveillance and anti-hacking technologies come at a price — around $200, making this a pretty expensive phone case — and that’s why they’re targeted at the military, security officials, government officials, VIPs, and executives who need serious protection.

“The idea was my father’s, but I was the executor. We come from the military background, which is one point that we thought about as we looked at it through a political perspective and the technical perspective,” said Eran Erez, in an interview with VentureBeat. “No one is trusting each other. In politics, everyone is recording each other. And in the tech world, we saw that we have lots of business intelligence,” where theft of corporate information is routine.

The company said it has six patents on the tech, and it can create multiple configurations to meet the needs of mobile users. The cases are independent, don’t use your phone, and they’re not network-specific. They don’t come with apps either.

The Cirotta case can block all camera lenses, stopping hackers from using cameras to gauge the phone’s surroundings. They can prevent unwanted audio or video recordings, conversation tracking, and unauthorized calls. The company says it can also prevent operating system hacks and data sweeping when powered on.

Using specialized security algorithms to bypass a phone’s active noise filtering system, they can also block the threat of the microphone’s external use, and override the global positioning system (GPS navigation) to block location discovery. (This was reportedly one way Ukraine has been able to target Russian military generals during the war).

As for the generals is Russia, they were probably targeted because they carried civilian smartphones that had GPS locations and compromised networks that allowed access to that information.

“In our case, it’s impossible to attack the case because we don’t have electricity from the phone and we don’t connect to Wi-Fi,” Eran Erez said.

The cases can also nullify discoverable Wi-Fi and Bluetooth connections and neutralize near-field communications (NFC). Those networks enable people in close proximity to a user to hack a phone.

Cybercriminals actively look for weak points they can exploit in smartphones. These include Wi-Fi connections, Bluetooth, GPS, microphones, and even cameras. Once connected to a phone, criminals scrub a device for personal information such as financial information, private identity records, contacts, etc., Cirotta said.

But beyond the connected phone, it’s possible to load malware onto an iPhone even when it’s off, as a new feature in iOS 15 allows users to locate a phone that is powered off as the chip itself sends a signal using Bluetooth, Near Field Communication (NFC), and Ultra-Wideband (UWB), Cirotta said.

One of the ways to stop microphones from being turned out is to simply muffle them inside the case so they can’t pick up sound. Security is often provided through location, Eran Erez said, as VIPs have to be tracked 24 hours a day for their own protection. At the same time, you don’t want potential hackers to know where you are, as that can compromise your safety.

And sometimes hackers will hack the location information for a low-ranking employee when they know that employee is around a high-ranking executive. Some companies have used the case to deliver security in the past, such as Privoro, which has a much larger case and is focused on the military market. The devices all use a concept known as hardware isolation.

The advantage of using the case is that the device is always on the phone. And you can also build extra security hardware into the case that isn’t on the phone, which is always hackable. The case weighs about 7 ounces, and so it doesn’t add that much weight to your smartphone. And it’s not a huge outlandishly large case either. The iPhone cases are ready but the Android cases will be ready early next year.

“We use a phone case because that’s give us a way to be close to your phone without the need of software. We are 100% hardware-based, as there is no connection to the phone. It is 100% embedded in the case,” Eran Erez said.

“The advantage is you don’t have to carry another hardware device,” said Eran Erez.

It has its own CPU, battery and memory system. And it has its own separate port for charging, separate from the phone’s charging port. So when you charge your smartphone with one charger, you can charge the case with another USB-C charger. It has about 18 hours of battery life.

The case has a switch that you can move to block the camera. The case isn’t allowed to block Wi-Fi or cellphone signals in a wide area, but you are allowed to block yourself. When you walk into a coffee shop and there is free Wi-Fi, you wouldn’t be able to get on with this case working. The case can also protect against electromagnetic pulse attacks.

“We don’t trust the people around you,” Shlomi Erez said. “You’re not hackable when you have zero connection to the world.”

The cases are available in two models. The Athena is designed for various smartphone models – currently for the iPhone 12 Pro, and also aimed at iPhone 13 Pro, future iPhone devices, Samsung Galaxy S22, and in the future many other models.

These cases are available in silver and gold models. The Athena Silver, which is available immediately, blocks a microphone and camera, and the Athena Gold, currently in development, will secure a phone’s Wi-Fi, GPS, and Bluetooth.

The Universal model is suitable for all smartphone models. The Universal cases will be available in August 2022 and sport a bronze, silver, and gold model. The Universal Bronze blocks only a phone’s camera; the Universal Silver blocks both the camera and microphone. In contrast, the Universal Gold blocks all transmissible data points, including a microphone, camera, Wi-Fi, GPS, and Bluetooth.

“Mobile phone technology is the most used form of communication, but it is also the least protected. While there are software solutions to thwart malware attacks, very little has been done to stop cybercriminals from using hardware and communication weaknesses in phones to breach a user’s data,” said Shlomi Erez. “That is until now. Our cases are a non-invasive way for an organization to protect a user’s phone and data. Our cases give users the power to turn their security functionality on and off while remaining 100% operational when in use.”

A single charge of the case provides over 24 hours of use, and as it is a 100% external accessory, no connection is required between the case and a mobile phone, preventing the case from being hacked. It is available for single-use phone purposes and for organizations looking to lock multiple devices with a unique/single key.

According to Cirotta, its cases are already being used at several high-profile organizations globally, with great success. Looking ahead, the company is actively working on securing a round of funding to support its manufacturing, marketing, and distribution efforts and a move into the U.S. market.

“Based on the growing interest in the Cirotta cases, we are actively looking for a strategic manufacturing partner and distribution partners in Europe, Asia, and Africa,” said Shlomi Erez. “Our initial focus is to deliver the solutions to business-to-business customers, with a long-term plan to support a business-to-consumer rollout. Our target market currently extends to government and defense organizations, private-sector research and development facilities, companies dealing with sensitive materials, and corporate executives.”

The company has raised nearly $2 million and it has 16 employees. While the products target VIPs now, just about everybody could use this kind of protection, Eran Erez said.