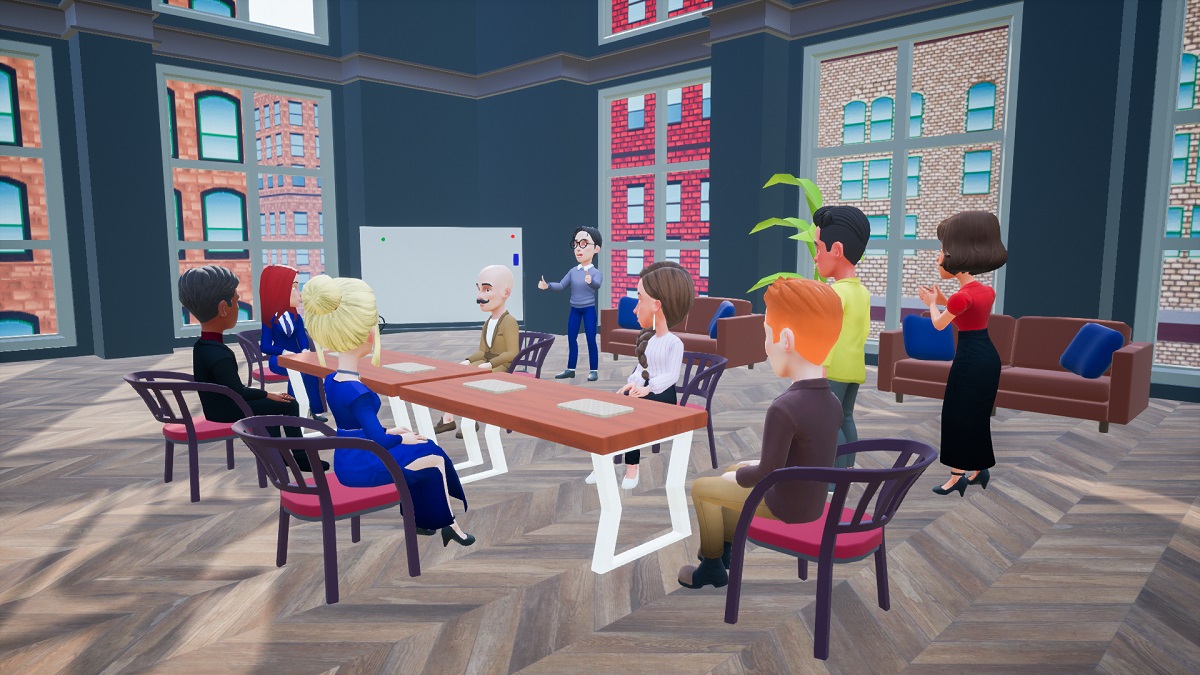 By squinting hard, you could see the metaverse everywhere at CES 2022. With a more open, more critical eye, you might not see it anywhere, or at least not yet in focus.

“Metaverse” is the current label to apply to technologies that might have been described as 3D social worlds, virtual reality, augmented reality, mixed reality, or XR (a superset of VR, AR, and MR) at past shows. Ever since Facebook rebranded under Meta as its corporate name, and proclaimed creating 3D social environments linked to its Oculus headsets as a major new company direction, the metaverse buzz has been building. Still, we’re a long way from seeing the emergence of the kind of metaverse depicted in Ready Player One or Snow Crash — a network of networks where user avatars can move between 3D worlds as easily as a web user can navigate between websites.

That said, there are some innovations in play, such as notions of how the 3D successor to the web might be built on a “web3” blockchain rather than contained within the network of a mega-vendor like Facebook/Meta. And to the extent that the metaverse is linked to the advance of immersive technologies like VR headsets, CES featured announcements like Qualcomm partnering with Microsoft on processors to power lightweight VR/AR headsets integrated with the Microsoft Mesh business metaverse.

Attempts to create a unified metaverse, rather than siloed 3D worlds for gaming, might come first from attempts to create an enterprise metaverse. For business uses such as training and meetings, standards would make intercompany meetings more possible. Proponents say this could be a way of adding more of a “just like being there” quality to virtual meetings than is possible with standard Zoom-style video meetings.

That’s what Touchcast is promising with MCity, which it calls “the first enterprise metaverse” (notwithstanding that there were several other “enterprise metaverse” products exhibiting at CES). Through today, Touchcast is hosting a Metaverse Summit in conjunction with CES both virtually and in a tent at the conference’s central plaza with more than 20 speakers from Accenture, Microsoft, Nvidia, and other metaverse pioneers.

Touchbase is one of the companies that has been helping companies like Accenture put on 3D virtual events for company meetings — something that’s been happening since the initial burst of enthusiasm around 3D worlds like Second Life in the 2000s. The MCity metaverse-as-a-service concept allows companies to register a DNS-like .metaverse domain for a “campus” of 3D structures where they can hold events on a regular basis. The 3D rendering environment is based on Epic’s Unreal Engine, powered by Nvidia GPUs running in the Microsoft Azure cloud. MCity also embraces Nvidia’s Omniverse standards for the portability of 3D renderings.

Because this directory of metaverse spaces is hosted on the blockchain, it isn’t limited to Touchbase’s application and could form the beginnings of the equivalent of a domain name system for an open, distributed metaverse, said Edo Segal, founder and CEO of Touchcast.

One thing not required for an enterprise metaverse, Segal said, is a VR headset. While there may be business applications, “it is a limited use case,” he said. “I don’t believe people are going to be going to work in a VR Headset. I think that’s a ridiculous notion.”

Representatives of Mytaverse, another “enterprise metaverse” event organizer, said the same thing — that the last thing their customers want to do is to have to order headsets for every participant in a meeting.

In both cases, the 3D worlds are treated as an alternate way of displaying webcam video of a speaker’s face with the background removed. For Touchcast’s CES Metaverse Summit, speakers were depicted as standing behind a virtual podium in a virtual auditorium. The standard Mytaverse avatars look like people in space suits with webcam images of people’s faces appearing within the faceplate of the helmet.

Even without an attempt to make avatars realistic (let alone hyper-realistic), a 3D space opens up possibilities like the capability to throttle the audio of different speakers up and down based on how “close” the listener is to other avatars, making it possible to join or leave conversations by walking around a virtual meeting room or conference space.

Of course, the role of the 3D headset looks a bit different to hardware vendors. Dan O’Brien, general manager at HTC Vive, said he has in fact seen interest from enterprises wanting to order tens of thousands of headsets if, in return for that investment, they can avoid having employees travel for training and corporate meetings.

There are still challenges to making people “feel like they’re really there and not in this cartoony avatar character,” O’Brien said. “It’s really important that we continue to work on technologies that allow for tracking facial movement and eye movement” for more realistic and human avatar renderings, he said. One advance HTC has made recently is with wrist motion detection of hand gestures, he said.

With 5G networks, it’s also becoming possible to move more of the processor-intensive work of rendering 3D scenes to servers on the network edge, rather than embedded in the device itself, O’Brien said. That, in turn, will enable the development of lighter headsets and AR glasses that will feel more natural to wear, he said.

Those advances, along with blockchain concepts for web3, are all in the pipeline, O’Brien said, adding, “It’s all going to take some time.”

As part of his press conference at CES, Qualcomm Cristiano Amon also cited 5G (and particularly millimeter wave 5G) as one of the factors that will make the metaverse a more interesting and useful place. Maybe more importantly, the business metaverse will be populated by “a digital twin of everything,” meaning a detailed visual and logical simulation of a car, or a piece of machinery, or a conference room so you can train on how to repair the machinery and interact naturally with other people in the conference room.

“You have the ability, when you connect the physical world and the digital world, to have incredible use cases in how the metaphysics of the metaverse takes shape,” he said.