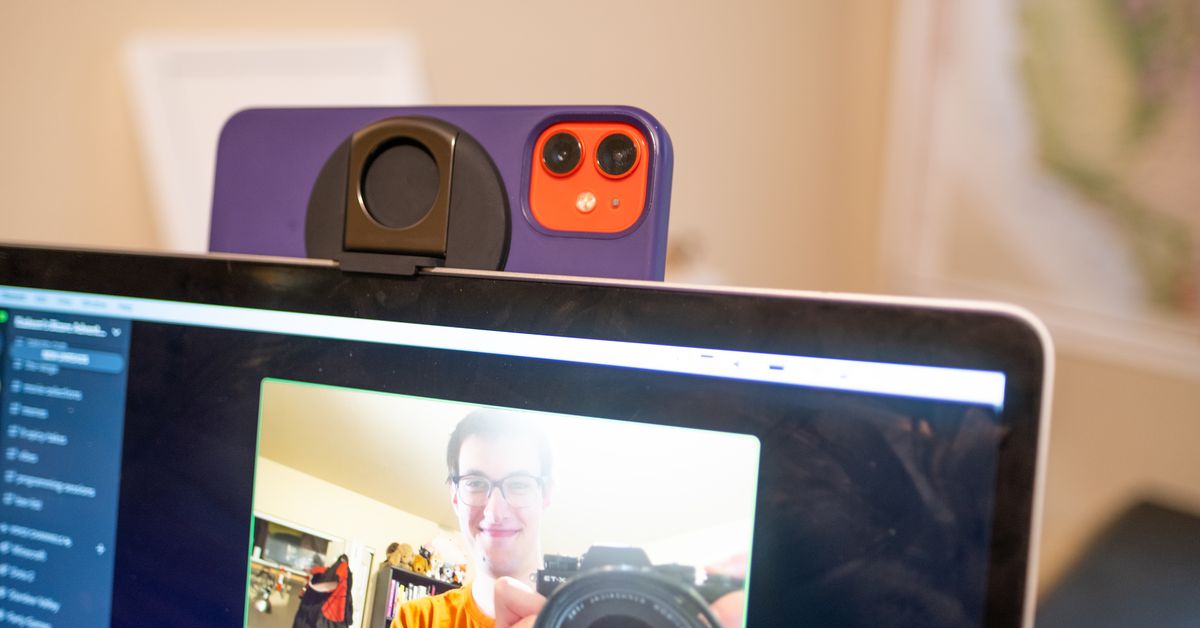 Belkin’s iPhone Mount with MagSafe for Mac Notebooks has a bad name but is a very good accessory. It lets you clip your iPhone onto your laptop so you can make use of macOS Ventura and iOS 16’s Continuity Camera feature, which turns your phone into a webcam that absolutely crushes pretty much anything that’s built into MacBooks these days. And if that was all it did, I’d still be happy with it — but its design and features are what truly make it worth considering, even though there’s already a flood of other accessories meant to do the same job.

Using the mount to turn your phone into a webcam is easy: you magnetically snap it on, flip out a little foot with Belkin’s logo on it, and rest it on top of your computer. Then you just choose your iPhone as the camera in whatever video chat app you’re using. It’s a pretty simple mechanism that works well, and because the mount is circular, you can attach your phone in either portrait or landscape mode.

Its versatile shape does, however, mean that there’s not that extra stabilizing magnet at the bottom like some other MagSafe accessories have. That probably won’t cause a strength problem; my iPhone 12 Mini never slid off Belkin’s mount or anything, even when I tested it without a case, and none of my colleagues who have used the mount with bigger phones noted any issues. But it does mean that you may have to spend a second twisting the mount a tiny bit to make sure your video doesn’t end up slightly crooked.

Where the mount really shines is its build quality and bonus kickstand / grip ring (unfortunately, the kickstand can’t really be used if you want to prop your phone’s camera up on a table instead of your computer; it’s just not in the right place). The whole thing feels very smooth and solid, like a rock that’s been polished by moving water. It’s also coated in a sort of grippy rubber, which feels great and is very unobtrusive. When I’m using it with my phone on, the low-profile dome fits pretty much perfectly into my palm, and I barely notice it’s there. If you actually want Continuity Camera to be useful, you have to make sure you’ve always got a mount with you. The Belkin is nice enough that I want to keep it on my phone, which means I won’t forget it when I leave the house.

The kickstand is useful for watching videos, but not taking them. It folds neatly into the mount when you’re not using it.
Photo by Mitchell Clark / The Verge

With that said, I don’t think this mount and Continuity Camera are going to revolutionize my casual FaceTimes or Discord calls with friends and family for one simple reason: when my laptop is actually on my lap, putting a phone at the top of the lid makes it very tippy, even with my mini phone. When I was using it with my legs crossed, it my laptop would easily fall over and yeet my phone across the room if I didn’t catch it. Even if I’ve got my arm on the palm rest, it only takes the slightest bump for the weight of the phone to pull my 13-inch MacBook Pro’s screen back to its maximum open position, usually resulting in a very unflattering angle (and perhaps an uncomfortable amount of force on my display?).

To be clear, this probably won’t be a problem on a desk unless you’re using the diminutive 12-inch MacBook. One of my co-workers said that his MacBook Air was perfectly stable when sitting on a table with an iPhone 13 attached to it, and the same was true for another co-worker who used the mount with a Pro Max and 16-inch MacBook Pro. But it does mean that I’ll probably only use this accessory for more formal video calls where I’ll be at a desk or counter rather than the far more frequent ones that I do from the couch. That’s not Belkin’s fault; it’s just physics, and really, I don’t think my mom or sister are going to mind seeing me in fuzzy 720p (or, at least, I haven’t gotten any complaints in the past few years).

Even with this limitation, I still feel like the Belkin mount is worth its $29.95 price tag for anyone who cares what they look like on video, has an iPhone, and plans on upgrading to macOS Ventura when it comes out on Monday (and who doesn’t want the hassle of setting up a dedicated camera / tripod / light).

However, if you mostly work from a desk with a monitor, it may be worth waiting for the desktop version, which Belkin says will let you tilt your phone to reframe the shot. That version is “coming soon,” according to Belkin’s press release, though it doesn’t mention whether it’ll feature some sort of power delivery that’s more elegant than just plugging your phone in using a Lightning cable. That sort of feature wouldn’t make sense on the portable version, but it’d probably be a nice add for those who are in meetings all day long.