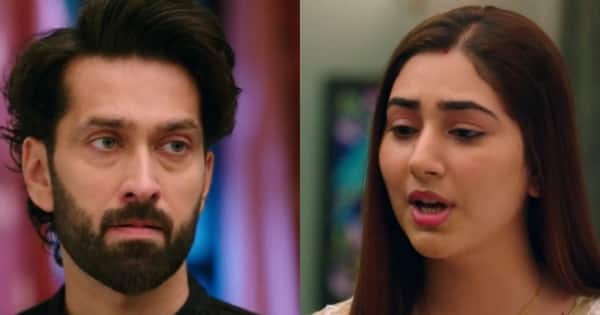 Nakuul Mehta and Disha Parmar starrer Bade Achhe Lagte Hain 2 ha taken an interesting turn in the show right now. There are two tracks that are running parallel in Bade Achhe Lagte Hain 2. First, it’s about the murder of Ram’s father and elsewhere, Sara’s husband and kid, Varun and Ishaan, have come to stay with them. As per the ongoing track in Bade Achhe Lagte Hain 2, it seems Mahendra Sood gave Sara’s husband Rs 25 lakh to stay away from her. He said that 15 years is a long time and the money was spent as well. Varun accepted Ram’s job offer and moved to Mumbai and that’s how Sara’s family reunited with her. Now, the relationship between Sara and Varun-Ishaan has been strained due to the distance. And Mahendra Sood will be seen taking an advantage of the same. – Imlie aka Sumbul Touqeer SILENCES troll who asks, ‘Why are you so fu**ing obsessed with your costars?’

Mahendra Sood aka Abhay Bhargava doesn’t want Varun and Ishaan to stay with Sara. And hence, he plots to send them back. He pretends to be on a call and says Ishaan doesn’t know of Sara making him stay in Mumbai and sending Varun back to Delhi. Ishaan gets upset on hearing this and runs away. Priya (Disha Parmar) who was having a conversation with Nandini aka Shubhaavi Choksey and Ram are informed about Ishaan’s disappearance. Sandy aka Maanya Singh tells her that Ram will find Ishaan. – Vikrant Rona star Kichcha Sudeep RESPONDS to Ajay Devgn’s tweet on ‘Hindi being the mother tongue’; wonders about the situation had he replied in Kannada

Mahendra Sood asks Sara to message Ishaan saying they will go back to Delhi. However, Priya stops her. In the sneak peek that the channel shared on its social media handle, we saw Priya telling everyone that Ram will find Ishaan. Priya says that she has complete trust in Ram that he will find Ishaan. Now, this has not gone down well with the netizens and fans of the show. They are questioning why will Ram go and look for the kid when their parents are right there. Check out the tweets below: – Trending South News Today: Vijay Babu absconds after denying rape; Yash shares deets about KGF 3 and more

R and P went while the parents chilled?#BadeAchheLagteHain2 #BALH2 pic.twitter.com/3m7NWhi12l

It’s actually easy for Ram to find Ishaan without even seeing him! You ask how? He just has to find someone as intolerable, irritating and disgusting as Sarangi! He also has another awful one to compare now! Varun! So easy peasy! , #BadeAchheLagteHain2 #BALH2 https://t.co/hxHnqCxAam

The only good thing of this entire conversation is that Priya is relying on Ram. And well, they are a family now so it isn’t a big deal if Ram finds out Eshan.

Why isn’t the rest of the family volunteering though? Ram isnt a servant.#BadeAchheLagteHain2 #BALH2 pic.twitter.com/3TNwf8Ztv8

In the upcoming episode of Bade Achhe Lagte Hain 2, we will see Priya fighting with Mahendra Sood who wants them to sell off the bakery. Mahendra threatens Priya to which she retorts asking whether he will try to kill her with a car as well. Ram aka Nakuul Mehta comes and makes them stop. He seems furious. Well, the fans wanted to see more of Ram and Priya’s love story than the ongoing plots.