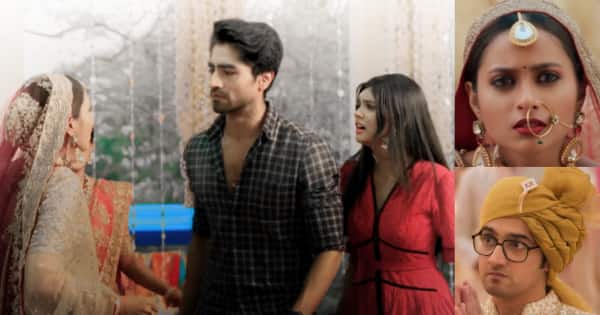 Yeh Rishta Kya Kehlata Hai episode 478 SPOILER 24 January 2022: Harshad Chopda, Pranali Rathod and Karishma Sawant starrer Yeh Rishta Kya Kehlata Hai is winning hearts and how! The current track features a major confrontation between Abhimanyu, Akshara, Aarohi and their families. In the upcoming episode of Yeh Rishta Kya Kehlata Hai, we will see Aarohi aka Karishma Sawant, the Goenkas and the Birlas coming to the mandir where Akshara and Abhimanyu are at already. Now, there will be a major confrontation between Abhi-Akshara and Aarohi and the families. – Trending TV News Today: Sidharth Shukla’s fans celebrate his journey on ITV, Shehnaaz Gill’s pictures in lehenga choli go viral and more

There will be a major family drama happening when the Goenkas learn that Abhimanyu is missing from the Baaraat. The Goenkas will slam Birlas for the same while the latter will stand mum feeling ashamed. Later, Aarohi will reveal that even Akshara is missing. Harshvardhan will then slam the Goenkas when he’ll learn that both Abhi and Akshara are missing. He will lash out at Akshara’s behavior and try to blame it all on Akshara. Aarohi will believe that Akshara and Abhimanyu have tied the knot. However, Akshu has reasoned with Abhi saying they need to talk to their families and do it the right way. Aarohi will lash out at Akshara for trying to steal Abhimanyu from her. However, Abhimanyu will take a stand for Akshara. – Yeh Rishta Kya Kehlata Hai: AbhiRa reunion, Aarohi’s truth and more – 5 twists that made the show win on TRP charts

Meanwhile, AbhiRa fans who have watched the episode online beforehand have slammed Aarohi and the Goenkas and Birlas for being blind towards Akshara and Abhimanyu’s love. They are also slamming Goenkas for not taking a stand for Akshara and always keeping mum whenever Aarohi gets angry at Akshara. Check out their reactions here: – Yeh Rishta Kya Kehlata Hai: Pranali Rathod aka Akshara is looking forward to the much-awaited AbhiRa wedding!

I feel that the Goenkas love Akshu and Aarohi but as Aarohi is the spoiled one, they want Akshu to be the understanding one.#AbhiRa #YehRishtaKyaKehlataHai

I know that people don’t like Kairav. But I feel the reason he didn’t support Akshu more actively is that Akshu didn’t convey her feelings clearly herself. He will support her because he does want her to be happy ultimately.#AbhiRa #YehRishtaKyaKehlataHai

Papa Brila looking down when Abhi said how dare you talk to my Akshu like this….. (papa know nxt is my turn ??)#Abhira #yrkkh pic.twitter.com/169So8ADAV

is bande se kuch na ho payega…
Who could not take a stand for his sister, what would he ever do?#AbhiRa
jab sab kuch pta h ise fir bhi chup rha….#yrkkh pic.twitter.com/pwwtdPjSkY

He’s like: Ab tak help karta aya hoon, abhi tum apna dekh lo.
,
I wonder how will he react if Aarohi reveals that he also knew the truth about the camp fire incident. ,#yrkkh #AbhiRa https://t.co/4LRoYOE7QB

I agree!They r all messed up!
They hv neither a father nor a mother! from senior goenka’s perspective they hv lost their son & daughter in law twice!
Kairav ​​is not a bad guy yaar!he loves her sister..
Both akshu & kairav ​​can’t stand 4 right
They fear losing aru! #AbhiRa #yrkkh https://t.co/fmBvuyl9Gk

Aarohi, tumhe toh aur zaleel hona hai ab ?
Let Akshu confess her love in front of the families, Abhi will then protect and support his Akshu with his life!#yrkkh #AbhiRa

Insane goenka’s getting some sense!!?
Even after this they are questioning #abhira what they were doing together in temple !!?#AbhiRa#yrkkh pic.twitter.com/JEcrwT6qTw

only if goenka’s spent the amount of time they use to point out fingers on abhi in arohi’s parenting, she wouldn’t have grown up to be an insensitive brat. This is the nth time she is accusing akshara for sirat’s d-eath and the family is standing still.#yrkkh, #AbhiRa pic.twitter.com/r7wa9FG0MF

Well, the latest buzz states that the makers are planning for a grand wedding of Abhi and Akshu towards March-end. Before that, Akshara and Abhi will have to convince their families for their wedding.