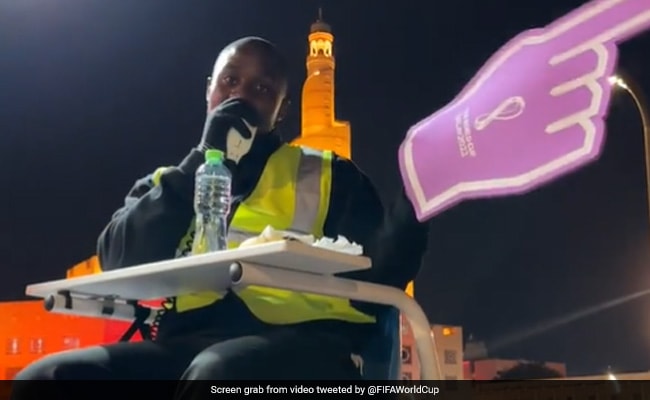 Videos of Mr Abbas have gone viral on social media.

A man from Kenya has become a social media sensation and a fan favourite at the ongoing FIFA World Cup in Qatar.

Abubakr Abbas, 23, wears a large foam finger, a reflector jacket and sits on a tennis umpire’s chair near a metro station in Doha and guides hundreds of visiting fans to the historic market of Souq Waqif.

Videos of Mr Abbas have gone viral on social media.

ICYMI, clips of ‘Metro Man’ have gone VIRAL thanks to his catchy style of guiding fans to the metro station 📈#FIFAWorldCup | #Qatar2022pic.twitter.com/lZcWlP2iiT

“The most trending African man in the world,” commented one Twitter user.

“We love him; we love the metro guy,” a fan told Al Jazeera.

“I saw him on TikTok. I thought it was really funny. He makes me laugh; it’s such a simple task,” added another fan.

As hosts of a global event like the FIFA World Cup, Qatar is witnessing thousands of tourists from all corners of the globe. Tourists visiting the Souq Waqif market, popular for its cafes and handicrafts, are interacting with Mr Abbas every day.

Not much is known about the background of the 23-year-old except the fact that he has now become a popular TikToker.

“The fans were just passing by and I thought of a way that I could engage them, and have fun with them,” he said in a video uploaded on TikTok. “Saying ‘metro this way…metro this way’ over and over was tiresome and boring. That is why I wanted to make it interesting.”