Watch: Elephant Takes A Car For Spin In Search Of Food 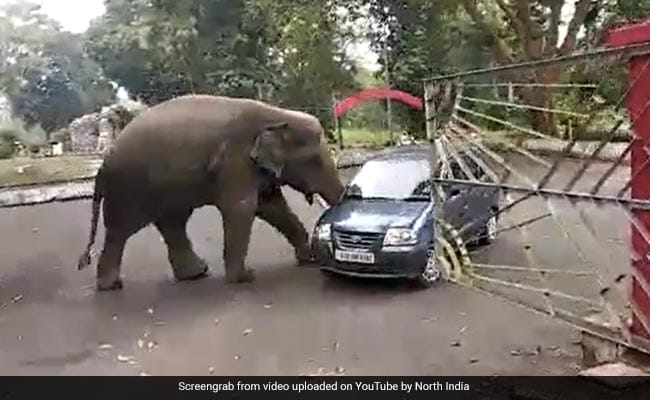 The elephant moves the car with its trunk.

Elephants are generally regarded as gentle giants, but at times they become enraged. A video from Assam’s Guwahati has surfaced on the internet which shows a jumbo taking a parked car on a spin. The video is reported to be from Narangi Military Station in Guwahati.

In the video, the elephant tries to break into a Hyundai Santro hatchback car with its trunk. The elephant is moving the car with its trunk like a toy, the car seems to have been in neutral as the jumbo is able to push it easily. In the background, people are heard shouting to scare the elephant away. Fortunately, no injuries were reported in the incident.

This video was widely shared on different social media platforms as well. A user on Twitter said, “He was just playing with the car as a toy.” “Such a disciplined elephant kept the car back where it was,” another user wrote. “Don’t keep food or any item with a strong scent in parked vehicles, even if doors and windows are closed,” the third commented.

Elephant videos are much loved on the internet. Recently, Indian Forest Service officer- Susanta Nanda on Twitter posted a video of a wild elephant wiggling carefully out of a building. The wild animal got into the house in search of food. Mr Nanda, in his tweet, mentioned that the elephant relished the food inside the house. He also said a fact about elephants they have better smell receptors than any mammal- including dogs, they can sniff out food that is even several miles away.

Another video of an elephant imitating a young girl got a lot of traction on social media. The viral clip opens with a cute little girl standing in front of an elephant and its caretaker. The girl suddenly does a little dance step and stops, within just a few moments, the elephant quickly imitates the girl’s movements by shaking its head and displaying its huge, flapping ears.