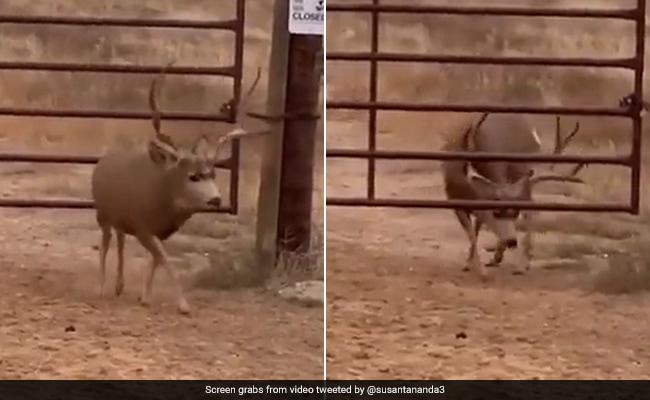 A fascinating video showing a deer getting out of a barrier gate by smartly manoeuvring his huge antlers is gaining traction on social media. The short clip was shared on Twitter on Saturday by Indian Forest Service (IFS) officer Susanta Nanda.

“Excellence is not only skill. It’s an attitude. Attitude to survive & evolve. Watch the manoeuvrability of the antlers….” Mr Nanda wrote in the caption of the post.

Excellence is not only skill. It’s an attitude. Attitude to survive & evolve. Watch the maneuverability of the antlers…. pic.twitter.com/iAZHWUfdLI

The video opened to show a white-tailed deer getting out of the barrier by first sliding the right side of his antlers outside and then repeating the same with its left side. After getting its head out, the deer then proceeded to press its body to the ground and slide past the gate.

The deer’s smart manoeuvring left internet users amazed. While some praised the animal’s “smart move”, others simply wrote, “animal intelligence is an instinct”.

“Animals are extremely good at brain-muscle coordination and have excellent muscle memory for precisely calculated manoeuvring,” wrote one user. “Just fascinating show of extraordinary intelligence in animal species…imagine how immensely blessed the world would be with such level of progressive manoeuvrability for mutual accommodation,” said another.

A third commented, “Adaptability is the buzzword,” while a fourth simply added, “Very intelligent.”

Meanwhile, videos featuring extraordinary behaviours of animals often grab attention online. Previously, a video showing a baby monkey cuddling with a tiger cub and having a good time together had taken the internet by storm. The cute friendship between the two left internet users in awe. The video garnered over 2,800 likes and hundreds of comments. Users flooded the comment section of the post with their heartfelt remarks and emojis.