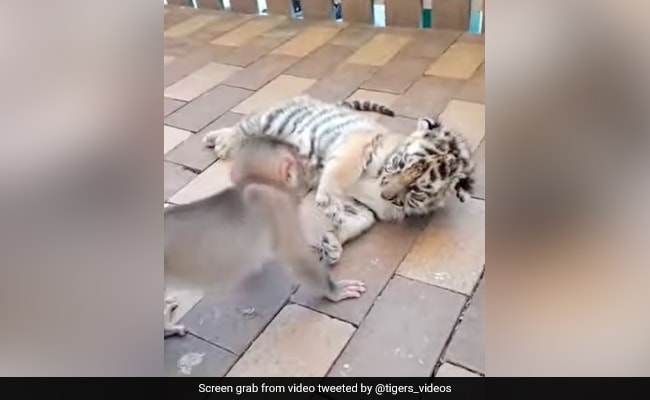 The clip shows a baby monkey cuddling with a tiger cub

The animal kingdom is full of unique and unusual friendships, bound to leave you surprised. Not just humans, species throughout the animal kingdom, from birds and fish to dogs and dolphins, have pals too. One example of it is seen in an adorable video that showcases an unlikely animal friend duo. The clip shows a baby monkey cuddling with a tiger cub, and having a good time together.

The video was shared on Instagram by an account called Tigers Videos and captioned as, ”Two babies.”

In the clip, the playful baby monkey can be seen cuddling and teasing its tiger friend, as they play together. Though tigers are known to be ferocious, the little cub is extremely gentle with the monkey as it allows its friend to touch it. Netizens loved the special bond that the baby monkey and its friend cub share.

The cute friendship between the tiger and monkey babies has won over people’s hearts, who can’t stop watching the video over and over again. Since being shared 2 days back, the video has garnered over 2,800 likes and hundreds of comments. Users have flooded the comment section of the post with their heartfelt remarks and emojis.

One user wrote, ” So sweet.. he’s trying to groom the cub,” while another commented, ” Beautiful babies.” A third called the video ”precious”, while a fourth wrote, ”It’s beautiful.” Another shared, “I can’t even handle this! I felt that warmth in my heart..!”

A few days back, a video of a baby monkey hitching a ride on a cat’s back had gone viral, showcasing yet another unique friendship. In the video, a cat was spotted giving its friend- a squirrel monkey -a ride on the streets. The friends were seemingly very relaxed in each other’s company, as they traversed the lanes together.

Gujarat Elections Not Over, BJP Looks At Next Round