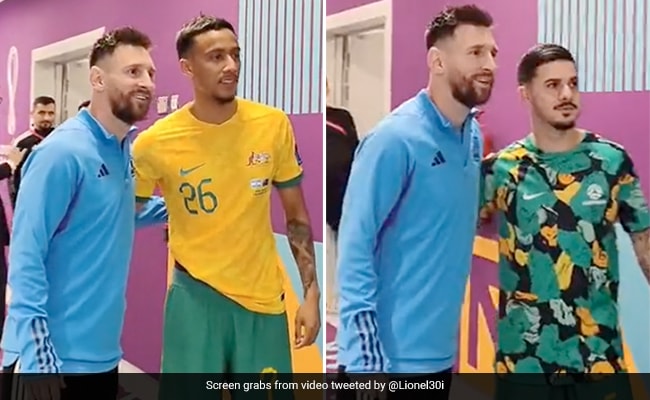 The video has accumulated more than 7.8 million views.

Despite losing the World Cup match on Saturday, several Australian players waited patiently outside Argentina’s dressing room to get a selfie with football legend Lionel Messi. A video of the same has gone viral on social media where Australian players, including Craig Goodwin, Keanu Baccus, Joel King and Marco Tilio, were seen taking turns to have their photographs clicked alongside the Argentina striker.

Australian players were fanboying over Messi after the match 😂 pic.twitter.com/uFIWWLt4m1

The short clip opened to show the players loitering in the lobby, hoping to snap a picture with the star striker. Seconds later, Messi is seen coming out of his dressing room and posing and clicking pictures with the Australian players.

Since being shared, the video has accumulated more than 7.8 million views. “I swear no
other player in the history of football will have the same impact as Messi,” wrote one user. “Who wouldn’t want a picture with Messi?? I will cry first before taking the picture,” said another.

A third commented, “Can you blame them? They will always be able to look back and say they played against the best player on the planet,” while a fourth jokingly said, “This video reminds me of how opponents click pics after the match with @msdhoni”.

Meanwhile coming back to the match, Lionel Messi on Saturday marked his 1,000th career appearance with his 789th goal to open the scoring in the first half at Doha’s Ahmad bin Ali Stadium. He scored a goal in the knockout rounds of the World Cup, leading Argentina into the quarterfinals with 2-1 win over Australia. Now, team Argentina will lock horns with the Netherlands in the quarterfinal on Saturday, December 10.