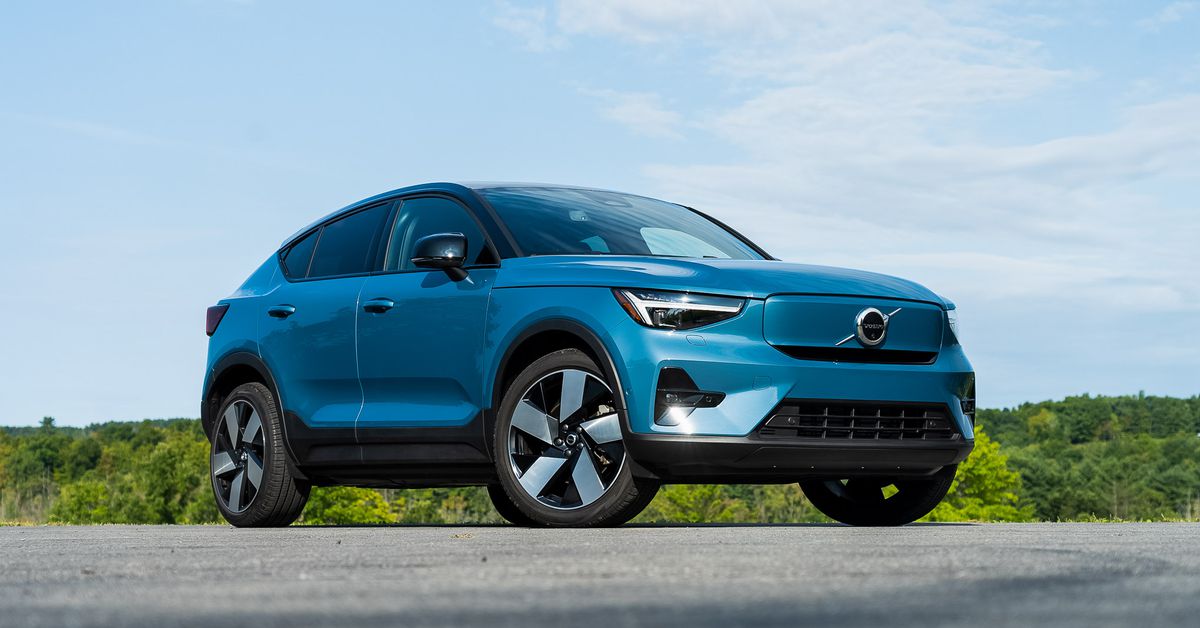 More and more manufacturers are rolling out their second or even third generation of EVs, battery-powered cars rolling on chassis specifically designed to hold electric motors, not engines. Meanwhile, Volvo’s current EV offerings are still making do with the five-year-old CMA platform, which was designed to cradle everything from turbo diesels to lithium-ion batteries.

This would seem to be a major handicap, but when the resulting car drives, looks, and feels this good, it’s hard to count platform flexibility as a mark against it.

This is the Volvo C40 Recharge Twin Ultimate, a lengthy name for Volvo’s littlest EV. Just barely, though. It’s only a smidge smaller than the XC40 Recharge, the rear hatch cropped to provide the crossover-coupe styling that, to quote Mugatu, is so hot right now. Going C40 instead of XC40 loses 8.5 cubic feet of cargo capacity and 2.4 inches of rear headroom. In exchange, you get that fresher styling and a shot of personality that so many of today’s EVs are sorely lacking.

From the Thor’s hammer headlights up front to the sharply sloped rear glass (which is tragically lacking a wiper), the C40 Recharge looks trim and sharp. It’s far from showy — but then, few Scandinavian designs are, and yet, they’re generally so very, very good.

Volvo dipped this one in a color called “fjord blue,” a lovely light metallic shade that’s sadly about as chromatically adventurous as the Swedish manufacturer gets these days. Scroll through the full palette of C40 Recharge color options and you’ll find a red, a white, two blacks, and three grays — one of which is almost green. Disappointing.

But step inside and all is forgiven. Look at that interior, highlighted by an even stronger shade that is, curiously, still called fjord blue. I’m not sure why Volvo didn’t pick a different name, but I love the result, a tightly woven cerulean carpet paired with suede microfiber and vinyl seats, all topped by a charcoal headliner. Modern Volvo interiors always look smashing, and this one is genuinely good. That it’s 100 percent leather-free is a great bonus.

A laminated, tinted glass roof caps it all off, letting in plenty of light without the glare. At night, the door and dash inlays emit a glow so subtle you’ll think at first you’re seeing things. It’s a stellar effect that’s less gaudy but no less memorable than the technicolor LEDs common on so many modern German luxury machines.

All that’s wrapped around an eight-inch portrait-oriented touchscreen housing what is probably the single most disappointing aspect of this whole car: Android Automotive.

Android Automotive is starting to feel stale.
But Volvo interiors always look smashing.
A laminated, tinted glass roof caps it all off.
Of course there’s a frunk to hold your charging equipment.

When Google announced this all-powerful in-car native flavor of Android back in 2019 I was fully on board. Volvo was, too, signing up both the house brand and country cousin Polestar.

The overall experience feels frustratingly basic, especially the non-customizable gauge cluster that offers only two near-identical views. Thankfully, the features that are here work well. If you’re a Google user, relying on big G’s Google Assistant, Calendar, Contacts, and Maps, you’ll feel right at home. The navigation experience is truly top-notch, giving accurate range estimates to every destination, including round trips, and automatically suggesting charging stopovers along the way. Integrated Assistant makes finding things and modifying vehicle settings as easy as it is to end road trip debates about obscure trivia factoids.

The range is adequate and often exceeds the EPA estimates.
Trust us, you don’t need more than 255 miles of range for most driving scenarios.
“Whosoever holds this hammer, if they be worthy, shall possess the power of Thor!”
Better than the Model Y? In a lot of ways, yes.

Those road trips, though, will either be short or frequently interrupted by charging. Range is the C40’s other concern, though it honestly hasn’t bothered me much in my testing. The C40 Recharge Twin Ultimate is EPA rated for 226 miles on a charge, with a combined miles per gallon gasoline equivalent (MPGe) rating of 87, or 39kWh per 100 miles. In my testing of the car at mixed city and highway speeds, I’ve found that to be on the conservative side, averaging 34.1kWh per 100 miles. Given the car’s 87kWh battery, you’re looking at a theoretical maximum range of 255 miles. That, in my book, is plenty.

Again and again, over multiple loans, I exceeded the EPA rating while finding the integrated range estimates from Google Maps to be on the money. That’s not only encouraging but also impressive because, when I’m driving this thing, I can’t resist a little speed.

You’re looking at a theoretical maximum range of 255 miles

You see, this may look like a buttoned-up and slightly cute crossover SUV, but it’s actually a little bit of a rocket ship. The C40 Recharge delivers 402 horsepower and 486 pound-feet of torque from its pair of electric motors. That’s enough for a zero to 60 sprint of 4.5 seconds, or about on par with the new Nissan Z.

The torque is addictive. I actually felt bad doing range testing on this because I couldn’t resist sampling more of the go pedal than I needed out of every corner and intersection. But the way the Recharge surges forward, inner front tire scrabbling for grip, made me grin each and every time. That you can drive it like that and still beat the EPA rating says a lot for the power of the platform here — undedicated though it may be.

But this is indeed an SUV and not a sports car. Handling is more engaging than you might expect and, with one-pedal driving, it’s a blast to cruise through twisty roads without touching the brakes. More importantly, the ride quality is quite good. The C40 Recharge is far smoother than the Tesla Model Y despite the larger 20-inch wheels and tires here. And it is, of course, blissfully quiet and calm in a way that only a well-engineered EV can be.

The door test is a bit dated and an inaccurate method of determining a car’s quality — but just the same, slamming any of the four doors shut on the C40 sounds like you’re sealing a vault. They lock out the world with an authoritative thunk you can feel in your chest. Mind you, if you’re sitting in the back seats, you’re liable to feel it in the top of your head, too. That cropped coupe-like roofline doesn’t do rear seat headroom any favors, but shorter adults and kids won’t complain.

The solidity of the platform makes it a great venue for the 13-speaker Harman Kardon sound system. If you’re a YouTube Music user, queuing up tunes is easy, but even if you’re doing BYO audio from another service, the car sounds great after a little tuning to ensure the highs aren’t getting drowned out by the subwoofer.

My favorite part of the sound system is the giant volume knob with an integrated play / pause button that Volvo is still kindly putting in all of its cars. That knob has enough weight that giving it a good counterclockwise spin to mute the audio is incredibly satisfying. Meanwhile, I’m always left wondering why more manufacturers don’t include dedicated play / pause buttons, as I find myself using them all the time on any Volvo I test.

That sound system, along with the panoramic glass roof and a dozen other features, come as part of the Ultimate package, which starts at $58,750. For that, you get Volvo’s comprehensive active safety system, Pilot Assist, including adaptive cruise with lane-keep assist and automatic emergency braking. A heat pump helps range in colder weather while the 360-degree camera helps you with parking.

That fjord blue paint costs an extra $695. Add on the $1,095 destination charge, and you can get yourself the car you see pictured here for $60,540. Now, that is a bit dear for such a little SUV, even should you compare it to Volvo’s gas-powered flavors. A similarly equipped XC40 B5 Ultimate comes in at $49,290 — but that, of course, burns gas and makes do with about half the torque.

And what if you’re thinking about a Tesla? Well, the Model Y is larger, but it’s close enough that I figure a lot of folks will cross-shop. Comparing range will fall well in the Tesla’s favor, 318 miles for the Long Range, but you’ll pay for it. The Model Y Long Range starts at $65,990 plus $1,200 destination. Mix in the questionable behavior of Autopilot, plus the reduced ride quality and the decidedly low-rent interior, and the C40 Recharge is a much better buy in my book.

The C40 is not a cheap car, not by a long shot, but it performs so well that you’ll forgive the middling range and underwhelming infotainment. It’s a car that is so clean, calm, and competent that you feel better as soon as you sit down, close that vault-like door, and cruise away. Or, in my case, launch forward, grinning like a hellion.

Photography by Tim Stevens for The Verge