Virtual communication without sniper rifles: How the 2D metaverse is changing virtual spaces 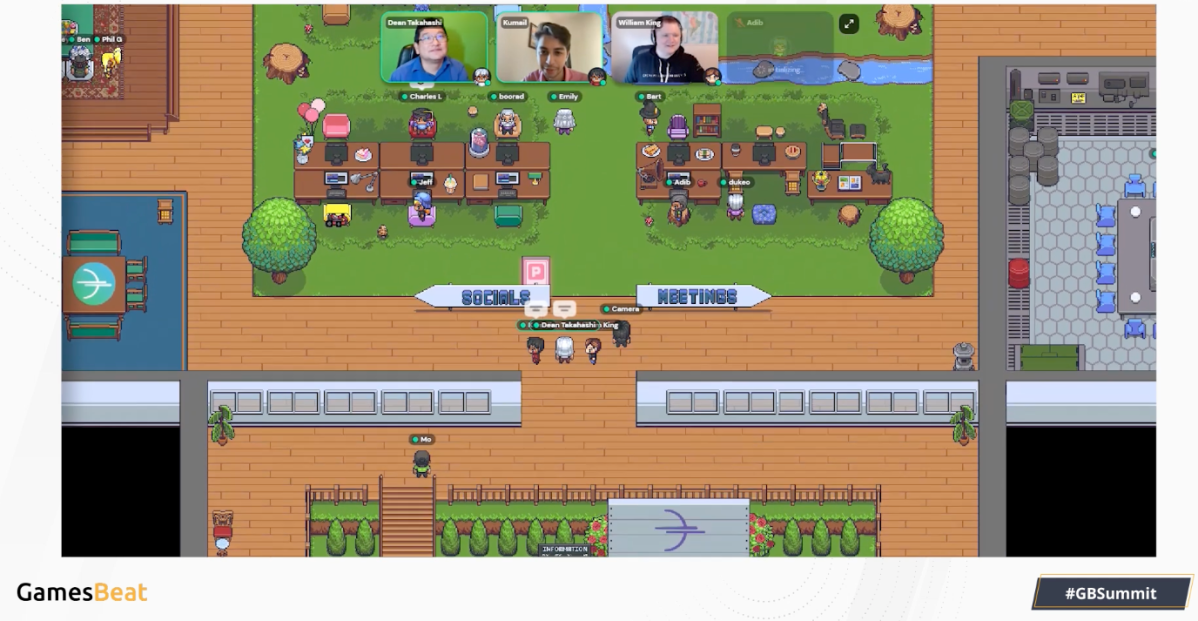 An accessible, easy-to-use metaverse doesn’t require VR. We already have the technology to build virtual spaces in which people coexist, collaborate, and create together, said Kumail Jaffer, co-founder and CTO of Gather.Town during the GamesBeat ‘Into the Metaverse’ Summit.

Dean Takahashi, lead writer at GamesBeat, was able to tour through the Subpace’s virtual office, led by Jaffer and William King, co-founder and CTO of Subspace, a global network platform that allows real-time applications to route traffic on the fastest paths.

The power of a virtual officeverse

There are already so many practical, real-life applications for these virtual gathering spaces, Jaffer said — everything from remote work to hosting conferences, trade shows, or even weddings.

“Anything that benefits from having a space for people to naturally interact, that’s what we’re trying to create here at Gather,” he explained. “That’s what we think the power of the metaverse is, creating natural spaces for people to connect in.”

The Gather meeting space is a virtual map you can navigate in your old-school JRPG style videogame avatar. Proximity chat gives you the feeling that you’re running into coworkers in the hall — when you’re close to someone, you can see and hear their audio and video feed; the video disappears and sound drops and mutes as you move away, letting you move fluidly between conversations. You can tap co-workers on the shoulder to chat over text or video, set up meetings, collaborate, and more.

It’s designed to bridge the gap between real-life interactions and virtual interactions in a way that most video meeting technology can’t, Jaffer says. For instance, on a Zoom call, you’re in a single conversation; at a party or any event or conference in the real world, you move fluidly between conversation groups.

“When COVID started we realized that things like this were missing, these natural interactions you get from a physical space,” he said. “That’s where we saw that we could provide some value. We could create a tool for creating these spaces, in which you could have more natural interactions.”

The broader here-and-now potential of the metaverse

While the application was inspired by the physical lockdown, it has shown so much greater potential, now that remote work is not going anywhere.

“Everyone was forced to try this virtual thing, forced to try making remote work happen, but now that the lockdowns are lifting, companies are realizing that this is just a good thing,” Jaffer said. “You can hire people from anywhere in the world. We don’t have to deal with the overhead of a physical office. Now that we’ve bootstrapped, the metaverse is possible, and we can do a lot of these activities virtually in a way that we didn’t think we could before. Now we’re adopting that in earnest.”

“Most of the employees here at Subspace were hired after COVID started,” King added. “We were able, very early, to say, you don’t have to live or move to be near our main office, which means we were able to find the right people who had the best skills.”

The vision of Subspace is to enable a community of communities, where interactions are seamless and the ideas flow better.

“A lot of conversations and improvements happen when you’re able to talk with a broader range of individuals, he said. “Talent doesn’t all migrate to one spot.”

The technology under the hood

While it’s a 2D video experience, it requires a solid network and computing infrastructure, because the video chat component is so essential to the experience. But there isn’t a lot of latency in moving around or connecting to people, or the transmission of audio and video.

For the best user experience, they’ve developed what they call a Point of Presence, or POP, which has capacity above and beyond what local ISPs can handle. Everyone who joins the virtual space is connecting to the company’s nearest POP. The Subspace team is deploying POPs incrementally to their users across the globe.

Subspace is building up a network to make it as easy as possible for users to connect across the globe in real time. They’re solving for the complexity of local metro internet, King said.

“A lot of the internet is built for people to connect to their local metro, and that’s about it,” he said. “A lot of the cloud data centers are built that way. They’re built to serve just that local metro. But Subspace is saying, a metaverse that’s fractured so that only people in your local metro, with your local language, can participate, that’s not the ideal. That’s not what we hope to be able to do. We’re trying to make it as simple as possible for companies like Gather to support everybody in the world, everybody who’s interested. Everybody who wants to experience this type of community can do so.”