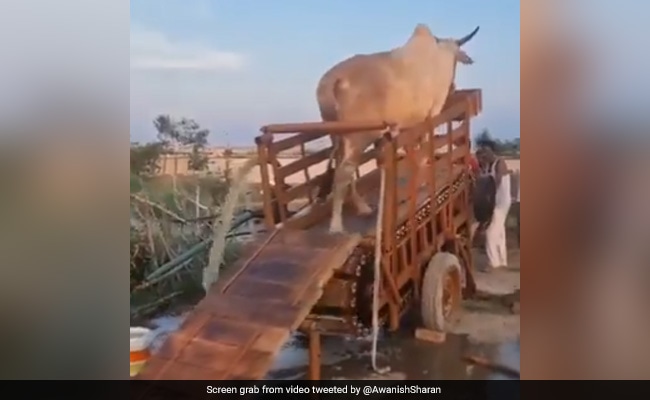 Image shows a bullock walking on a trademill-like machine.

There is no denying that Indians can beat everyone when it comes to creativity, and doing things in the most economical way possible. A video shared by IAS officer Awanish Sharan shows a bullock walking on a treadmill-like machine. The machine is attached to a pump which helps in spraying water into the fields for irrigation.

The video further demonstrates a man switching on many light bulbs connected to an electric motor that is further connected by the other machines. Many bullocks can also be seen operating such trademill like machines.

Within just few hours of getting shared, the video has amassed over 92,000 views, more than 5,000 likes and still counting. The person who developed the methods for over exploiting animals has been mocked incessantly by Twitter users in the post’s comment area while some users can be seen appreciating the idea.

“Not appreciated on cost of animals pain..where he was forced to walk,” wrote one user.

Another said, “Such indigenous innovations & ideas must be encouraged to boost country’s economy through confluence of traditional wisdom & modern techniques as mammoth population can be lifted up economically through such job orientated out of box ideas. Though slow, but solid way to march ahead.”