Viral Video: Mother Elephant Blesses Forest Officials After Being Reunited With Its Calf 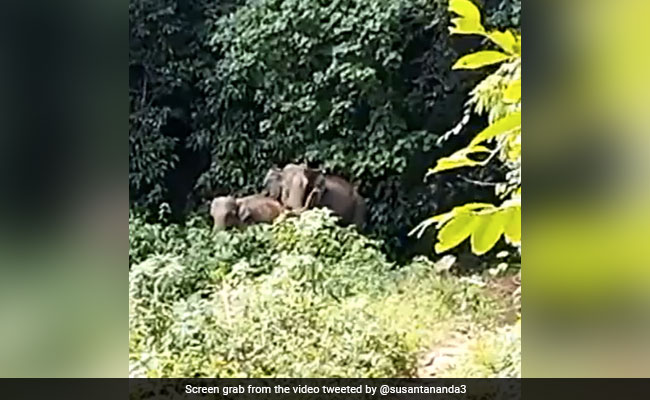 Elephants are familial creatures and they move around in herds. However, sometimes, calves get separated from their herd and have to be reunited. Now, taking to Twitter, Indian Forest Service (IFS) officer Susanta Nanda shared a video showing a mother elephant blessing the forest officials for reuniting her with her baby elephant.

Mr Nanda shared the video on Thursday and since it has received more than 13,000 views and over 1,100 likes. In the caption, the IFS officer wrote, “That blessing.. The calf was reunited with its mother by the Forest staff. Mamma blesses them before leaving with the baby for its abode. Too cute to miss.”

Calf was reunited with its mother by the Forest staff.
Mamma blesses them before leaving with the baby for its abode. Too cute to miss.
VC: TN Forest Department pic.twitter.com/tygEbc1aME

Internet users appreciated the act of the Tamil Nadu forest officials and flooded the comment section with heart emojis.

“This is beautiful. It pains me how many babies are ripped from there mothers to satisfy profiteers in many parts of the world. This precious act by humans is rare as the day that will come when animals will be a rare sight indeed,” wrote on user. “Elephants are precious,” said another.

A third wrote, “Blessings from all animal lovers to out forest staff who work in tough conditions sincerely doing their duty.” “Absobeautiful…acknowledging the good work…kudos to all the staff who did this noble work…good bless,” commented fourth.

Meanwhile, whether they are shot in the wild or in captivity, elephant videos are frequently posted on social media. Earlier this month, a video also showed Chhattisgarh forest officers assisting an elephant calf that got separated from its herd. Forest workers rescued the baby elephant and even performed a preliminary health examination before helping it find its family.

“We received information that a month-old elephant cub got separated from the herd. We reached the cub’s location in 15 minutes to rescue him. A health checkup was done and the cub was then reunited with the herd,” Jashpur Divisional Forest Officer Jitendra Upadhyay said last week.