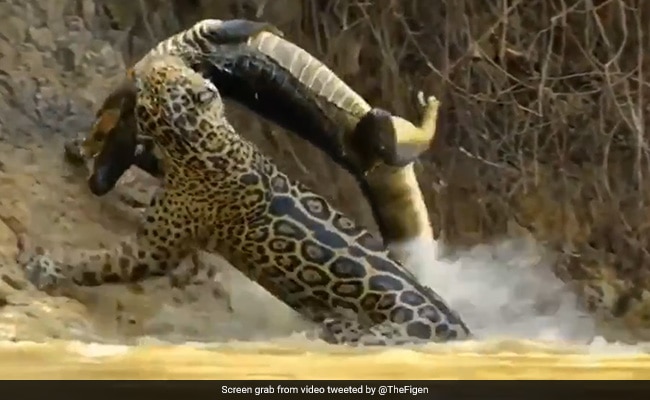 Picture shows the jaguar grabbing the crocodile from its neck.

The law of the jungle is that the strongest survive. And it applies to apex predators too. A video going viral on social media shows exactly that. In the footage, which has re-appeared on Twitter, a Jaguar is seen hunting a crocodile on the bank of a river. Shared by a user named Figen on Monday, the video was originally posted by another user named Vahsi Hayatlar on Twitter two years ago but is going viral now.

OMG what a power!! pic.twitter.com/LHZazN2zwP

“OMG what a power,” reads the caption of the post.

The now-viral video shows the Jaguar using its stalk-and-ambush strategy while approaching the crocodile. The big cat is first seen hiding amidst the branches and bushes near the river, with total focus on the crocodile. It then suddenly jumps on the crocodile floating in the water and attacks it.

In the 42-seconds clip, the two of the ferocious wild animals can further be seen fighting an intense battle for survival. The Jaguar wins the battle, emerging from the river with the crocodile’s neck in its jaws.

The video has received 2.6 million of views and more than 27,000 likes since being shared. Around 4,800 users re-shared the video on Twitter.

“Jaguar jaw strength is amazing. Strongest of all the big cats,” a user wrote.

In yet another hair-raising video, which appeared online earlier this month, killer whales were seen launching repeated violent attacks on each other at a Sea World in the United States. The horrifying clip was captured by a visitor at the San Diego aquatic park and shared on social media by animal rights group PETA.