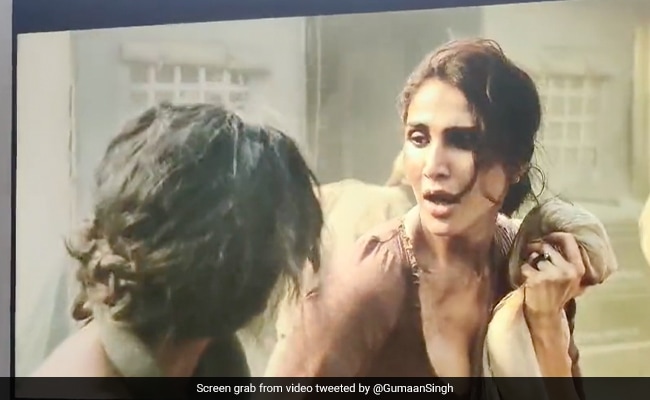 Shamshera failed to impress the audience and the critics.

Ranbir Kapoor-starrer Shamshera, which was made on a massive budget of approximately 150 crores, failed to garner footfall at cinema halls. While the makers and cast members of the movie continued to praise and defend the period film, internet users were quick to notice a bizarre scene in one of the action sequences.

In the final scene of the film, Ranbir Kapoor was busy fighting Sanjay Dutt, and Vaani Kapoor was seen engaging in a sword fight while protecting a baby in her hand. However, the baby in her arms was apparently so unimportant to the director that they didn’t even buy a doll to represent him.

Let’s just assume that there is a baby 👶#Shamshera#IseewhatIcantpic.twitter.com/4bS0KbV6dY

Eagle-eyed netizens noticed how the baby seemed more like a cloth looking like a swaddle with nothing inside.

One user wrote, “And then the cast and crew and fanboys will write cute long essays on how misunderstood #Shamshera is and how the audience is unnecessarily critical.” Another added, “We used to get atleast a baby sized toy and wrap it up for out stage play in college, and these guys didn’t think it was required! M amazed!”

A third said, “Uff that’s a massive goof-up for a 150 cr movie.” “I watched it last night and i noticed this in whole climax that it’s so visible that they r shooting without baby, at least they could edit and add baby face there,” commented fourth.

Shamshera is backed by Yash Raj Films and directed by Karan Malhotra of Agneepath fame. The period movie features Ranbir Kapoor in a double role for the first time in his career. Released on July 22, the film failed to impress the audience and the critics.

Previously, the director of the movie even shared a note, apologising for “abandoning” the film because he couldn’t handle the “hate and rage”. Separately, Sanjay Dutt also shared a note about Shamshera staggering box office response, and director Karan Malhotra and Ranbir Kapoor getting “hate” from the audience.