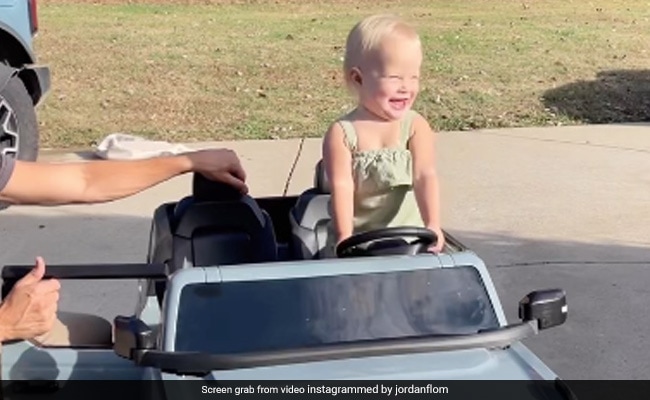 She appears happy and excited upon seeing her own mini vehicle.

A father-daughter relationship is very special. It is full of love, fun and special requests by the daughters. A similar video of a father-daughter duo is going viral and the internet is loving it. In the video, the father is seen surprising the daughter with her own mini car.

The video was posted by Jordan Flom on Instagram. In the video, the toddler is sitting and enjoying her father’s brand-new Ford Bronco. She is unaware that her father is giving her a small replica of the car while she plays inside his new car. A few seconds later, her father gets the surprise gift for his daughter and covers it with a cloth. He then picks the baby girl and shows her the surprise. She appears happy and excited upon seeing her own mini vehicle.

The clip was shared on November 10. Since then, it has amassed 10 lakh likes and 14.8 million views. “He bought her a matching Bronco!” reads the caption of the video.

One person said, “She made sure there was really something out there before she got out of Daddy’s truck. Lol.”

A second added, “Her little scream when she grabbed the steering wheel.”

“She was beyond excited Daddy of the year for sure,” commented a third.

“Girl with her first car! Now your really going to have to top this big time when she turns sixteen!” remarked another one.

A user said, “Now that’s the cutest thing I’ve seen all day. Look at her excitement!!!”

A few days ago, a video of a father ironing the clothes of his daughter’s dolls while the toddler sits on a different bed, enjoying herself, went viral. The video shows the mother entering the room while recording the video and asking the man for help in folding the clothes. Her husband is sitting and ironing dolls clothes. The husband looks over to their daughter and tells the mother that their toddler has asked him to do that.

The mother bursts into laughter and later tells the man to help her with laundry. To this, he replies that he needs to finish ironing first. It is interesting to note that the father is seen on a small, pink chair, probably meant for the size of his little girl.