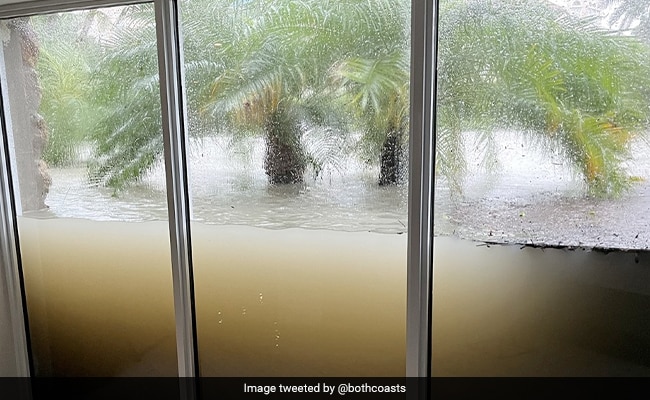 The picture was posted on October 2

Ian, one of the most powerful hurricanes ever to hit the United States, left a trail of devastation across Florida. The storm reportedly killed more than 100 people. Images of the aftermath show a glimpse of the destruction caused by the storm. Now, a ‘notable’ photo of a window is going viral on the internet for all the right reasons.

Shared by a Twitter user Dixie Whatley, the picture is from Naples city in Florida. In the post, Ms Whatley shared that she and her family live on the beach in Naples, Florida and they decided to stay through the hurricane instead of living in their house. She shared a photo which shows water levels reaching great height outside her windows. The windows did not shatter and it also prevented the flood water from coming inside the house.

She wrote, “We live on the beach in Naples, Florida. We stayed through Hurricane Ian. Thought I’d share a rather notable photo from the experience.”

In another tweet, she said, “Trying to find out the brand of the windows. Turns out they’ve been there for over 15 years! Apparently, they leaked at first, had to be refitted, and no problem ever since. As some of the pros who commented have said, the installation is as important as the windows.”

We live on the beach in Naples, Florida. We stayed through the Hurricane Ian. Thought I’d share a rather notable photo from the experience… pic.twitter.com/LziDWoVN78

The picture was posted on October 2 and it has received 3,78,800 likes and 49,200 retweets. A Twitter user posted, “Wow. I knew some people that miraculously had a similar situation after a mudslide. 7 feet of mud and rock and the windows didn’t even crack. Glad they held for you.” Another commented, “Kudos to whoever installed those windows!!”

The third commented, “Whoever the contractor was doing a bang-up job! Glad they held up for you!”

Almost two million customers were without electricity in Florida, out of a total of more than 11 million, with southwestern areas of the state the hardest hit, according to the PowerOutage.us tracking website. ”