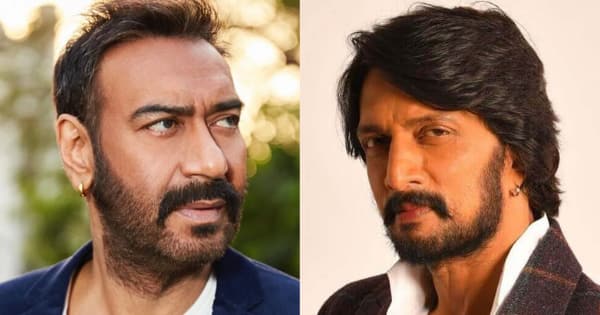 Kichcha Sudeep’s statement on Hindi not being India’s national language has sparked controversy. Runway 34 actor Ajay Devgn has tweeted out to Kichcha Sudeep saying that Hindi is India’s national language and will remain thus. The Tanhaji actor had also tweeted out in Hindi while addressing Kichcha. And now, the Vikrant Rona star has responded to Ajay’s tweet. The actor replied saying that he wasn’t intending to start a debate. He added that he would reveal the reason as to why he made such a statement when they meet in person. That’s not it, Kichcha also responded to Ajay Devgn tweeting out in Hindi to him. The actor said that he would perfectly understood what he wrote in Hindi as he respects, loves and has learned Hindi. However, he did ask Ajay about the response he would have git if he had replied to his tweet in Kannada. – Trending South News Today: Vijay Babu absconds after denying rape; Yash shares deets about KGF 3 and more

Kichcha Sudeep also asked if they don’t belong to India while addressing Ajay in his tweet. When Ajay replied thanking Kichcha for clearing the misunderstanding, Kichcha had more to add. Ajay Devgn tweeted out saying that the context of his statement would have been lost in translation. Kichcha tweeted out to Ajay saying that it is one of the reasons why not reacting without knowing the complete matter, matters. He also added that he would have been happy if he would have received creative reasoning from him. Check out the snapshot of Ajay Devgn and Kichcha Sudeep’s Twitter exchange below: – Karan Wahi to get married soon? Never Kiss Your Best Friend 2 actor spills the beans [EXCLUSIVE VIDEO] 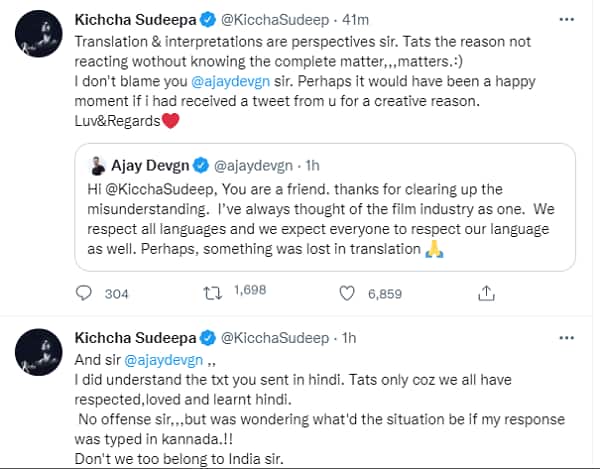 Talking about the statement that Kichcha made at an event, it goes like “You said that a pan India film was made in Kannada. I’d like to make a small correction. Hindi is no more a national language. They (Bollywood) are doing pan-India films today. They are struggling (to find success) by dubbing in Telugu and Tamil, but it’s not happening. Today we are making films that are going everywhere,” as reported by Hindustan Times. The actor had been speaking on the recent successes of films such as RRR, and KGF Chapter 2.