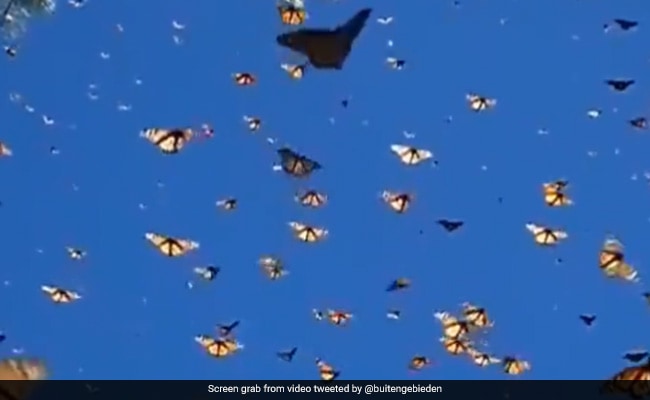 Humans are always in awe of nature and its beauty. An adorable video of stunning monarch butterflies fluttering under a clear blue sky is going viral online. Hundreds of butterflies are seen in the clip, which add beauty to the surroundings.

Shared by a user named Buitengebieden on Twitter on Friday, the caption reads, “Monarch butterflies.”

The monarch butterfly is one of the most recognizable and well-studied butterflies on the planet. Its orange wings are laced with black lines and bordered with white dots.

Within a few hours, the video has already accumulated 1.75 lakh views and over 13,000 likes. More than 2,000 people have re-shared the post on Twitter, and there are numerous comments left by other users. Some users have talked about the migration of these monarch butterflies while others have appreciated the beauty.

“Near where where I live is a beach that has a bunch of eucalyptus trees. Monarchs come here every year and it is amazing,” wrote one user.

Another said, “Once as a kid in SoCal, I found myself in a super-dense cloud of migrating Monarchs. Now I live near where central migration paths begins to condense and see plenty of them, just not in such a dense cloud.”

“This looks relaxing,” wrote a third user while sharing the post.

Danaus plexippus, the monarch butterfly, is a well-known member of the milkweed butterfly family (subfamily Danainae, order Lepidoptera) and is distinguished by its enormous size, its orange and black wings, and its extensive yearly migrations.

Although they are more common in North, Central, and South America, monarchs may also be found rarely, in Australia, Hawaii, India, and other places.