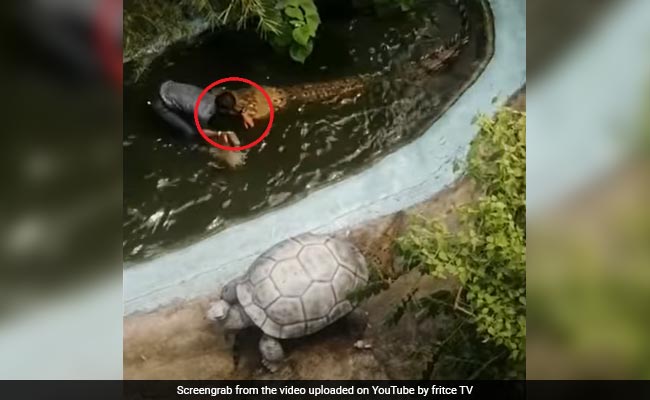 A tourist in the Philippines was attacked by a crocodile after mistaking it for a life-size model. Nehemias Chipada climbed in a pool to snap some pictures with the 12-foot reptile at a theme park. However, to the 68-year-old man’s horror, the crocodile lunged at his arm and dragged him into the water.

According to The Mirror, the incident occurred while Mr Chipada was visiting the Amaya View amusement park in Cagayan de Oro City, the Philippines, on November 10.

As he stood with his phone in one hand to take selfies with the crocodile, the predator grabbed his left arm and dragged him into the water in front of his terrified family and other bystanders. The incident was captured on camera by onlooker Rogelio Pamisa Antiga and the visuals have been widely shared online.

You can watch the video here.

According to the Daily Mail, Nehemias Chipada was luckily able to break free and escape. Photos taken immediately after the attack show him lying on the ground, his left arm bloodied and bandaged. He was rushed to the hospital, where he received surgery on his left arm. Mr Chipada is recovering from the attack at Northern Mindanao Medical Center.

The Chipada family has blamed lack of warning signs around the amusement park for the incident. Mr Chipada’s daughter, Mercy Joy Chipada, said: “There were no advisories warning us not to enter the enclosure. Because if there were, we would never have gone there.”

The amusement park, however, has denied these allegations. Amaya View said it would extend financial assistance to Mr Chipada to help with his medical bills while denying any wrongdoing.

Amaya View Chief Operating Officer Candy Unabia said: “We deny the allegation that we have been negligent.

“They said they thought the crocodile was also artificial, but that area is actually restricted. There are signages and constant reminders from our tour guides,” he was quoted as saying by the Daily mail.

Meanwhile, onlookers at the scene describe being horrified by what they witnessed. “I was looking at the lovely scenery around the park when the incident happened. I heard people screaming for help and saw the crocodile manhandling the old man,” said Rogelio Pamisa Antiga, who filmed the scene.

“I wanted to help him, but I was scared and had no knowledge of how to deal with a crocodile attack.”