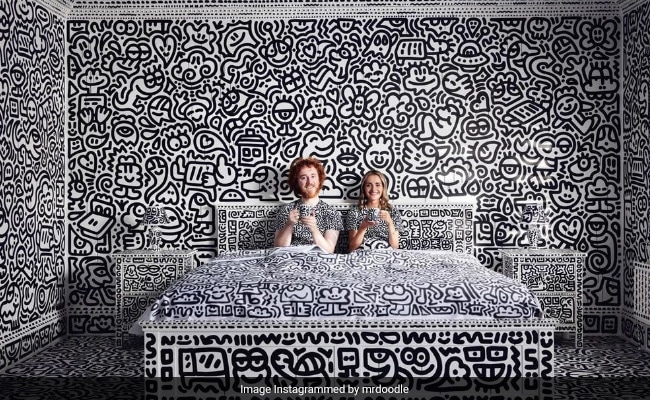 In 2020, Sam Cox was the world’s 5th most successful artist aged under 40 at auction.

An artist in the United Kingdom recently achieved his childhood dream of living in a house full of doodles.

Sam Cox, who is professionally known as Mr Doodle, covered every inch of his house, from his bedding to his bathtub, with doodles. In an interview with BBC, the artist revealed that he spent around three years creating his one-of-a-kind art piece, which he now shares with his wife Alena, a fellow artist, who frequently colours in his works.

In an Instagram post, Mr Cox said that he used 900 litres of white paint, 401 cans of black spray paint, 286 bottles of black drawing paint and 2296 pen nibs to complete his project. “The whole house is real, everything is doodled, the doodles were all hand doodled for the animation it’s not CGI,” he added.

Speaking to BBC, Mr Cox said that he first purchased his house three years ago, for $1.5 million. He revealed that his bedroom was the first room that he started when he began doodling over the house. “This is sort of paradise for me,” he stated.

When asked what goes through his mind while he’s doodling, Mr Cox said, “It’s just such a great process. You feel almost like an out-of-body experience. You’re just indulging yourself in this free-flowing state of creation and it’s just the best thing anyone can do, I think.”

Further, the artist admitted that he is not sure if the kitchen appliances he painted over are still functional. When asked if his wife knows that fact, he replied, “She’s not totally aware of that yet.”

As per the outlet, Mr Cox became popular internationally after his videos on social media racked up millions of views. In 2020, he was also the world’s fifth most successful artist aged under 40 at auction.

Meanwhile, on Instagram, Mr Cox has 2.7 million followers. In the comment section of his post, internet users called him “legendary” and congratulated him for completing his “insane” project. “This should be more than an Instagram post,” wrote one user. “It’s an absolute masterpiece. Congratulations! You should enter the film into some short film festivals. It’s so great,” added another.