Tour Guide Takes Selfie With Cheetah Only Inches From His Head, Internet Is Divided 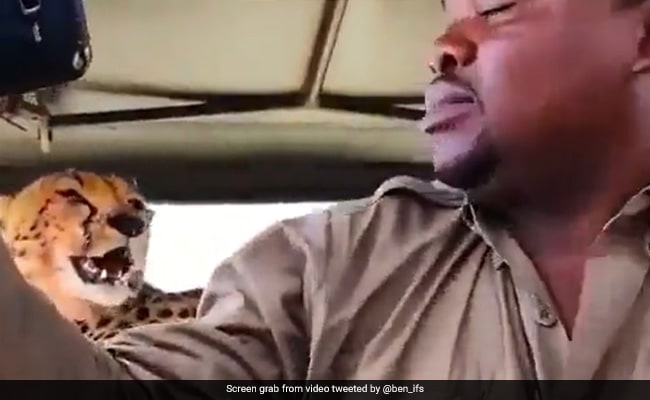 A fearless tour guide clicking a selfie with a cheetah has gone viral on the internet. Posted by IFS officer Clement Ben, the short clip shows a group of tourists sitting in a safari car. Moments later, a curious cheetah climbs on the open-top safari car and begins using it as a viewpoint.

In the nerve-racking video, the tour guide is seen getting up from his seat to get a selfie. Further in the video, the big cat is seen sitting inches away from the guide’s head, while he is seen telling the tourists, “Don’t worry, I am your guide.” The cheetah, however, gave him a spectacular selfie while exploring the vehicle. The video ends abruptly, there is no information on how long did the tourists wait for the cheetah to get down from the car.

Check out the video here:

The video has amassed 75,200 views, 2,789 likes and several comments. While there was a section of social media users who were impressed with the spectacular selfie, others called it “wrong on all counts.” A user commented, “Its like Selfie with yamraj moment,” another user wrote, “CHEETAH was in search of shade due to hot atmosphere.Since there was no tree nearby.. that’s why Cheetah decided to take a break under the roof.” “selfie of decade,” the third commented.