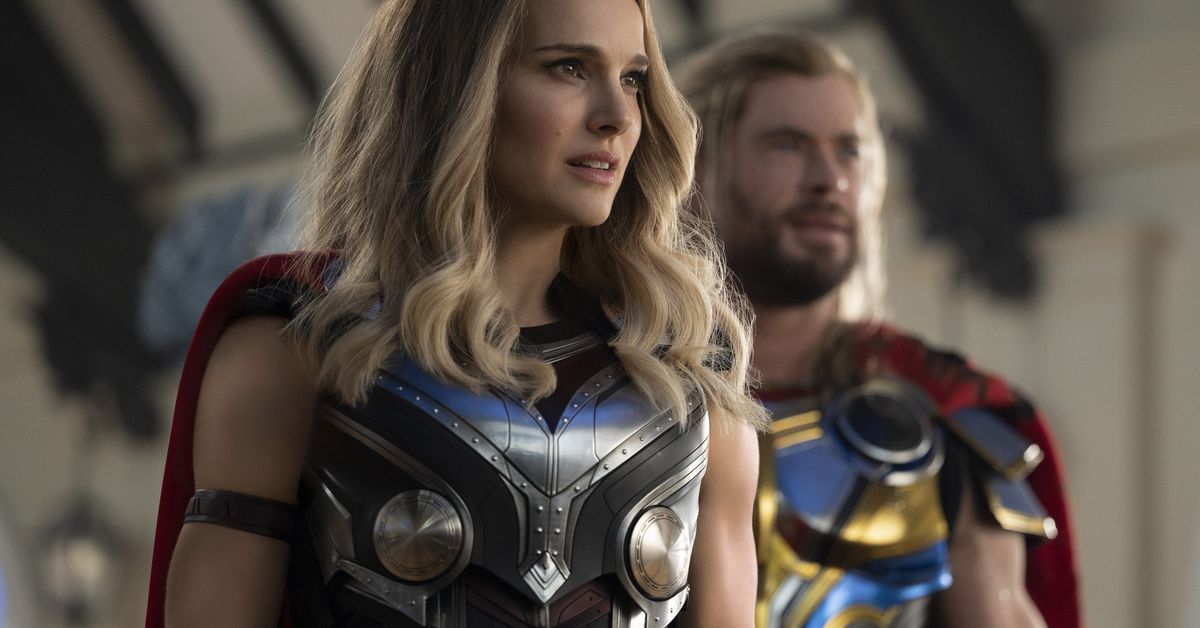 Once upon a time, Marvel Studios’ Thor movies were overwrought slogs that only catered to the most diehard comic book fans — until one day, when director Taika Waititi’s Thor: Ragnarok revitalized the franchise with colorful whimsy and a hulking but lighter sense of humor. While reframing Thor as the MCU’s himbo god of jocularity was a solid way of renewing interest in the character, an overabundance of jokes and reliance on the Odinson’s comedic chops are some of the big reasons why Waititi’s Thor: Love and Thunder feels like an awkward step back.

Like most of Marvel’s recent Phase 4 films, Thor: Love and Thunder is a sequel that tries its best to work as a standalone movie, but its story works best if you come to it having seen some of the studio’s other recent tentpole movies. Set some time after Avengers: Endgame, Thor: Love and Thunder gets right back to the ongoing story — or myth, depending on how you look at it — of how Thor Odinson (Chris Hemsworth) became one of Earth’s most legendary heroes after leaving the original Asgard.

Both because the Avengers don’t exactly exist anymore as an organization and because Thor chose King Valkyrie (Tessa Thompson) to lead New Asgard at the end of Endgame, Love and Thunder finds the Asgardian thunder god and Korg (Taika Waititi) somewhere out in space with their newest chosen family — the Guardians of the Galaxy. Though Peter Quill (Chris Pratt), Nebula (Karen Gillan), and the other current Guardians feature largely in one of Love and Thunder’s first set pieces, they’re only part of the film for a brief amount of time, meant to illustrate the aimlessness and codependence Thor feels in the wake of everything he’s recently lost (like his beer gut).

Similar to Spider-Man: No Way Home and Doctor Strange in the Multiverse of Madness before it, Thor: Love and Thunder’s an excellent example of Marvel still not being quite sure how to pick up ongoing narratives that get interrupted by massive crossover events. Love and Thunder clearly wants to keep its focus fixed on Thor, who hasn’t headlined his own film since 2017. But so much has happened within the MCU since then that Love and Thunder’s ability to create a cohesive and compelling sense of shared continuity with its predecessors is initially limited.

While Love and Thunder feels almost as if it’s clearing its throat as it’s catching you up on Thor’s life, the movie’s far more sure of itself as it introduces you to Gorr (Christian Bale), an ordinary single father who becomes a butcher of the gods after his prayers to save the life of his daughter go unanswered. After years of leading with the idea that all of its characters inspired by deities were actually different kinds of aliens, Thor: Love and Thunder marks the return of Marvel framing them as supernatural beings whose powers aren’t just highly advanced forms of technology.

Gorr’s desire to rid the universe of gods gives him a unique motivation in the MCU, but what’s really intriguing about his presence in Love and Thunder is how he helps the movie work as a study of what kind of person Thor is. Before Love and Thunder even pits Thor and Gorr against one another, it hammers home how, despite all Thor’s Avengers-related heroism, as a deity, he’s never been the most responsible or attentive to the needs of the humans who love and worship him — all of which makes it easy to understand Gorr’s hatred.

Like Gorr, Jane Foster’s (Natalie Portman) feelings about (at least one of the) gods are complicated and deeply personal, but Love and Thunder brings her back into the MCU in part to show you how her world didn’t really end after her being ghosted by the divine. Dr. Jane Foster, astrophysicist, had an entire life before Thor crashed into her life, Love and Thunder matter of factly points out, and it’s what she got back to after he left.

In addition to establishing Jane as a bestselling author, Love and Thunder complicates her story by introducing elements from writer Jason Aaron and artist Russell Dauterman’s Mighty Thor comics that transformed Jane into a new kind of Thor as she also battled breast cancer. While there are some echoes of comics Jane’s path to becoming the Mighty Thor present in Love and Thunder, the movie approaches the character in a markedly different way that plays like a deliberate pivot away from Marvel’s approach to rolling out big-name female heroes in recent years.

When Marvel began teasing out Jane’s Thor turn with an announcement on The View (yes, that The View) back in 2014, it felt very much like Disney making an effort to spotlight Marvel’s larger project of revamping legacy characters to appeal to a new generation of readers. Canon-challenging comics centering characters like Carol Danvers are what laid the groundwork for them to join the MCU, and the financial success of films like Captain Marvel spoke to how many of these all-new, all-different heroes resonated with audiences. But rather than tapping into the Mighty Thor comics’ ideas about what it means to be worthy of bearing the responsibility that comes with being a hero, Love and Thunder largely leaves Jane in the realm of jokey love interests where she’s robbed of some agency in a surprising way.

Love and Thunder’s frequent detours into romcom territory in between action-heavy set pieces feel like Marvel’s attempt at testing out just how much the Thor movies can be used to give viewers a taste of other genres. Both Portman and Hemsworth bring a lighthearted joviality to Love and Thunder that works well in moments when the movie’s highlighting the emotional connection that first brought Thor and Jane together. But the film struggles when it has to shift gears to focus on Gorr, a grieving zealot who Bale portrays with an intensity that falls short of being terrifying.

Thor’s history of prioritizing glory over duty and Jane becoming a newly minted member of the Asgardian pantheon could, one imagines, make their confrontation against a god killer the sort of showdown meant to crown a movie working with some relatively lofty ideas. Instead, Love and Thunder generally positions itself as a fairy tale for children about star-crossed lovers who are afraid to tell one another how they feel even as they stare down the one thing that might actually be able to kill them.

Thor: Love and Thunder doesn’t come anywhere near being as much of a letdown as Multiverse of Madness was, but the two movies are alike in how they both seem to be the products of the MCU settling into an era where its future is still being figured out. At least some of that future’s teased out in Love and Thunder’s mid- and post-credits scenes — both of which are almost certain to be crowd-pleasers that satisfy those who show up already certain they’re in this for the long haul. But as the latest piece of lore defining the Odinson and his allies in the present, Thor: Love and Thunder is a clunky chapter in what feels like a franchise that’s still figuring itself out.