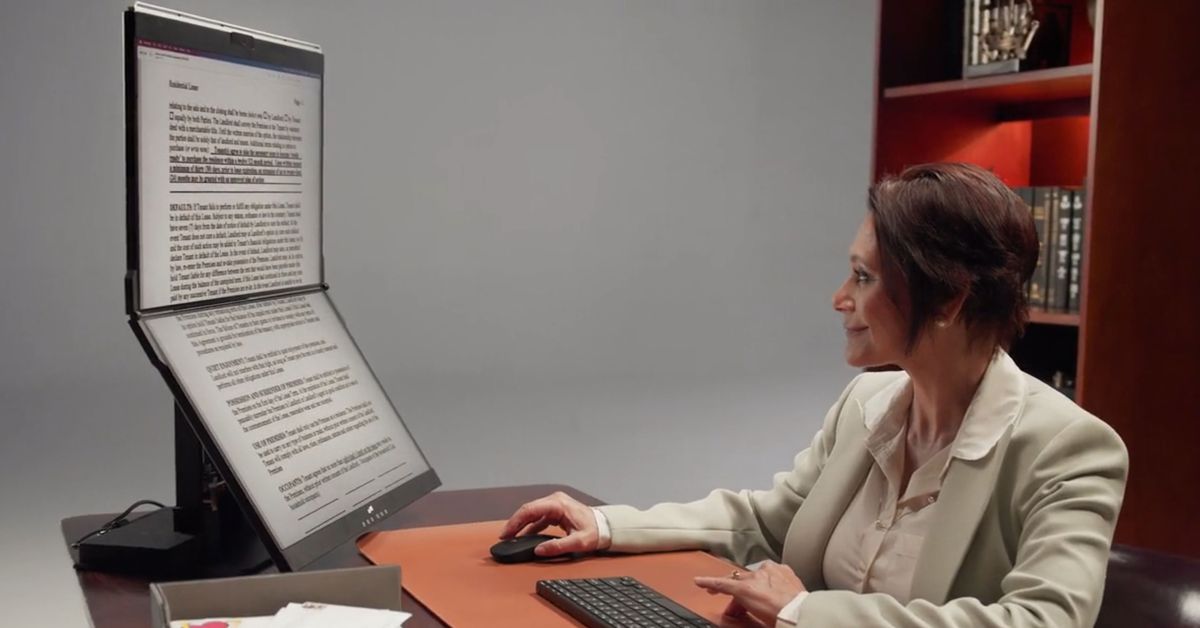 Mobile Pixels is running a crowdfunding campaign for this Geminos range of folding dual-screen clamshell displays, which offers an interesting alternative for folks looking to replace a side-by-side monitor setup. It claims those “take up too much space” and are “not ergonomically designed” — or maybe you just need something that resembles Samsung’s aggressively quirky Odyssey Ark gaming monitor without the $3,500 price.

Having two monitors stacked on top of each other is something you can replicate easily with monitor stands, but the Geminos line has a bit more to offer than just a folding design gimmick and a starting price of $499.

Both the Geminos and Geminos X are equipped with built-in speakers, a 1080p webcam, and a docking station with two HDMI ports, two USB-A ports, a standard 3.5mm audio jack, ethernet port, TF / SD card reader, and USB-C with passthrough charging capped at 100W. Unfortunately, there’s no specific mention regarding the generations being used for ports like HDMI or USB.

While these built-in features are consistent, there are some variations in the actual display specifications between the two models. Both use two 24-inch displays with a central hinge and adjustable pedestal stand, though the Geminos has a 1080p resolution set at 60Hz and 250 nits of brightness, while the Geminos X boosts this to a 1440p resolution at 75Hz and 300 nits.

Then, of course, there’s the clamshell design. The actual functionality of the displays means you can fold the displays in half, and GIFs of the product appear to show that users can adjust the positioning from anything between the fully open and closed position, giving you more flexibility than any traditional stacked dual-monitor setup.

You can also connect both displays using a single cable (provided you download the Mobile Pixels driver), which means that laptops like the MacBook Air, typically restricted to just a single additional display output, can utilize both screens.

The project was announced on Kickstarter on July 20th and quickly gained some serious attention from interested backers, reaching its original goal of $25,000 within 36 minutes and, as of the time of writing, just over $1.6 million has been pledged. Provided that sum exceeds $1.75 million before the campaign finishes on September 3rd, there’s an additional stretch goal benefit where the company will offer to upgrade the bottom display of the Geminos X to one with 10-point touch capabilities for an additional $50.

This, luckily, isn’t the first experience that Mobile Pixels has had with crowdfunding, having previously launched portable monitor solutions for laptops such as its Duex and Trio range, all of which successfully reached their funding goals — albeit with some shipping delays on its Duex Lite and Duex Plus launch.

Some specs and features do warrant a raised eyebrow or two (one for each display) here. The design looks ideal for content creators like streamers who often utilize a vertical monitor or stacked monitor setup to keep an eye on their stream chat or Discord channels, but that’s about as useful as this will be outside of general productivity given the lack of 4K support and information regarding color accuracy.

Its claimed 13ms response time likely won’t appeal to gamers looking for a new gaming monitor either, and the brightness of both models is fairly mediocre when compared to the likes of Apple’s Studio Display, which has a peak brightness of 600 nits. The Geminos and Geminos X currently have an early bird price of $499 and $649, respectively, but we should note that those prices will allegedly double if the product ever hits the retail market.