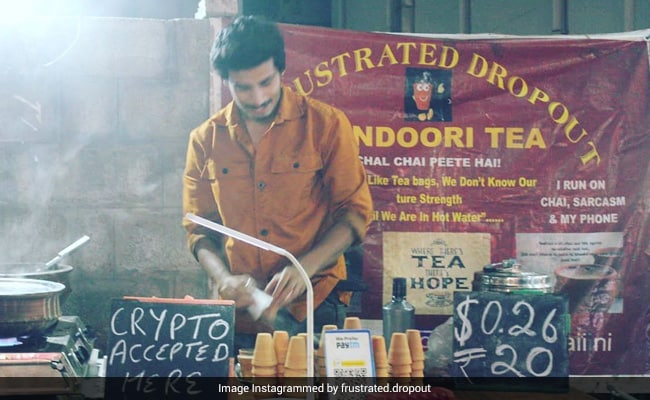 A tea shop in India’s startup capital Bengaluru has grabbed everyone’s attention with its idea of accepting Bitcoin as a mode of payment. The shop, named “Frustrated Dropout”, is owned by Subham Saini, who after dropping out of his BCA course started this venture.

In a picture shared on Twitter, a man is seen making tea amid packets of Maggi and pasta on a table. The banner, in the background, reads, “Chal Chai Peete Hai.”

“We make your tea in earthen-friendly pots and serve it in kulhaad,” it says. The highlight is the payment details, “Cryptocurrency accepted here,” and a Bitcoin symbol.

A cup of tea at this shop costs Rs 20. Customers can also pay with UPI.

Mr Saini told the Indian Express, “I had invested Rs 1.5 lakh [in the cryptocurrency market], and in a matter of few months, I saw a 1,000 per cent jump in my portfolio. Soon, my crypto wallet increased to Rs 30 lakh, and this was a big deal for a student like me.”

Just when Mr Saini thought he is the “next Rakesh Jhunjhunwala of the crypto world”, the situation turned bad with the crypto market crash in 2019. “I was back exactly where I started, from Rs 30 lakh to Rs 1 lakh. I couldn’t believe that one night could change so much in my life,” he added.

People on social media are impressed with Mr Saini, who “runs on chai, sarcasm and phone”.

A person asked, “How does he accept crypto? Which all coins are accepted? How does he decide the exchange rate? I have so many questions.”

How does he accept crypto?
Which all coins are accepted?
How does he decide the exchange rate?

“Does this happen only in Namma Bengaluru?” another tweeted.

Does this happen only in Namma Bengaluru ????? #NammaBengaluru

This is “next level marketing”, Twitter user Hardik Sharma said.

“If you know this guy, pass him another idea: NFT chai — own the chai you drink,” yet another Twitter user said.

If you know this guy, pass him another idea: “NFT chai” –own the chai you drink.

It is not the first time a tea stall owner has created a buzz on social media. Earlier this year, the story of an Economics graduate who decided to set up a tea shop near a women’s college in Bihar’s capital Patna was shared widely. Priyanka Gupta, who graduated in 2019, said she was inspired to open the tea stall after hearing the story of Prafull Billore, famously known as “MBA Chaiwala”.

“There are many chaiwallas, why can’t there be a chaiwali?” Ms Gupta, 24, had said.