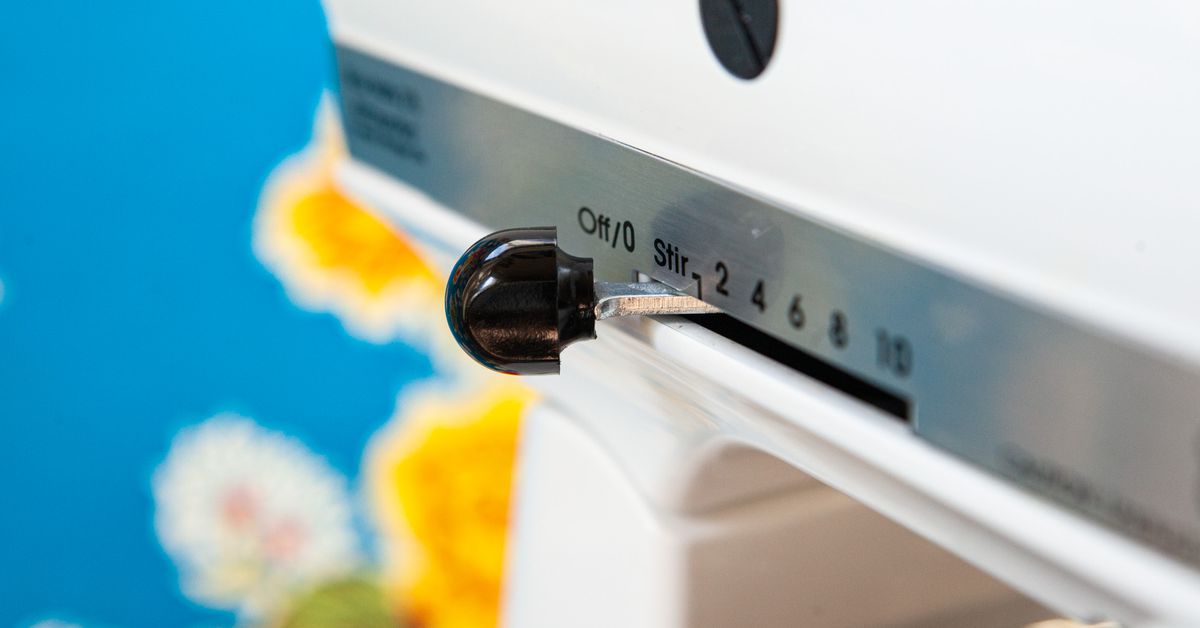 It took me joining a baking club to realize just how good my KitchenAid stand mixer’s controls are. Ever since I got it a few years back, I’ve admired the simplicity of its two-lever system: one that lets you tilt the head up and down and one to control the speed. But now that I’m using it every week, I’ve finally figured out what makes it click so well for me: it’s the fact that the speed lever feels sturdy and rugged while also providing incredibly precise control.

The speed control lever’s job is made fairly obvious by its name: it lets you control how fast your mixer is mixin’ and also acts as an off switch at its “0” setting. The lever is a sturdy metal affair, and the version on my mixer is capped off with a piece of black plastic that has several scoops to make it grippable, even with doughy fingers. As you move it back and forth, you hear (and feel) extremely satisfying clicks, which correspond with numbers printed on a metal band.

(Before we go on too much further, here’s a disclosure: Vox Media’s creative brand has worked with KitchenAid to create content and ads around its mixers. Neither had anything to do with the creation of this story, though; I only discovered this while doing research.)

The first few times I used my KitchenAid, I was actually a bit annoyed at the clicks — what if I wanted to be in between two of the speed settings, I thought. It turns out that you totally can be; the clicks are there as guidance, not as a rule, and you can set and leave the lever between two of them. That’s where the precision comes in. Perhaps the ultimate form of this for me is when I make icing: in order to keep powdered sugar from being flung into every nook and cranny of my kitchen, I grab the lever and rock it back and forth between off and the first click, making it so the paddle attached to the mixer stirs as carefully as I would if I were using a spoon.

It’s a very simple yet effective mechanism for what’s ultimately a simple yet effective device. Part of that likely comes down to just how long this design has been around; the KitchenAid Model K, which was introduced in the 1930s, has a remarkably similar-looking handle on it, as have most of the brand’s mixers since then. (Though a few models have been controlled by a top-mounted dial.)

In many cases, it wouldn’t really be a surprise that KitchenAid takes an “if it ain’t broke, don’t fix it” approach to the controls on its mixers. It’s not like the job of its mixers has changed much over the years; we’re still using them to beat eggs, mix flour, and knead doughs. But saying that KitchenAid takes the easy path by not redesigning the controls would be underselling the trend in the kitchen gadget and appliance industry of focusing on aesthetics over functionality.

There are many discussions about how cooking at home has changed in the Instagram age, with certain shoppers caring just as much about how good their kitchen and food end up looking on their feeds. As a result, many companies have started trying to make products that are closer to chic home decor or an iPhone than a piece of industrial equipment you’d find in a home kitchen.

Even companies that have reputations for being ruthlessly practical aren’t immune; Vitamix has been on a kick of adding touch controls and screens to some of its high-end blenders, and Wolf has gone a similar route with some of its ovens. When it comes to direct competitors to KitchenAid’s iconic design, Breville (or Sage, for those across the pond) has a mixer that uses a dial and a series of lights to control and indicate your mixing speed, and it’s far from the only company trying to make its controls sleeker.

And, of course, KitchenAid has played the aesthetics game in some ways; arguably one of the reasons its mixers are the de facto standard is the fact that they’re made in approximately a million colors, so anyone can find one to fit in with their decor. Even my beloved speed lever isn’t 100 percent immune from beautification; on some models, the tip is made out of shiny metal instead of utilitarian black plastic. But regardless of what form it took, the lever was on every stand mixer I saw on KitchenAid’s website.

It’s always possible that the company will change the lever out for something else someday, going the route of chasing new and marketable user interfaces and form factors. I won’t cry if it does, though, mainly because my mixer is already equipped with one. And if the machine is anywhere near as sturdy and thoughtfully designed as its controls, I shouldn’t have to worry about replacing it anytime soon.