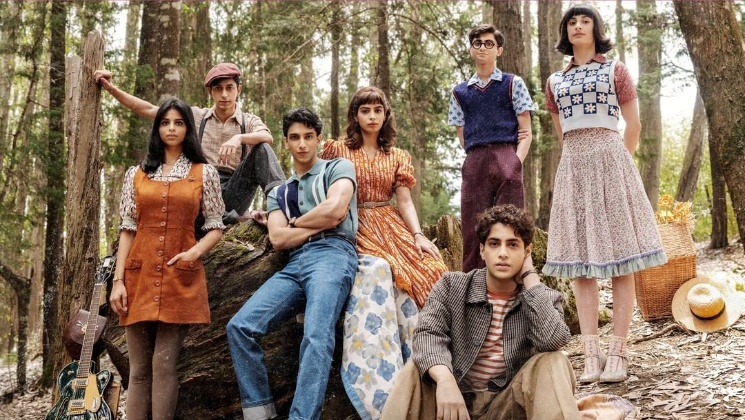 Ever since Zoya Akhtar announced that she was making an Indian adaptation of The Archies comics for Netflix, the project had been in the news for its cast. There were reports of many star kids getting launched with the musical, and today the team has finally announced the cast along with their first look from the film and it looks every bit intriguing and exciting. The Archies will mark the showbiz debut of Shah Rukh Khan’s daughter Suhana Khan, Boney Kapoor’s daughter Khushi Kapoor and Amitabh Bachchan’s grandson Agastya Nanda.

The makers released a very fun and interesting teaser this morning from the film revealing their fresh ensemble cast. Apart from Suhana Khan, Khushi Kapoor and Agastya Nanda, The Archies will also star Mihir Ahuja, Dot, Yuvraj Menda and Vedang Raina. The look of the cast is very retro as it is set in the 1960s, and the teaser has a very catchy music track by Ankur Tewari. It gives a glimpse into the world of the islanders as they celebrate their friendship on a picnic and their chemistry will surely be a highlight of the film as visible in the teaser itself. It does increases the curiosity to dive deep into that world. The film has the iconic gang of The Archies at the forefront, and perfectly depicts the youthful energy, hope and excitement of the sixties era.

Check out the first look here:

Produced by Zoya Akhtar and Reema Kagti’s Tiger Baby Films in collaboration with Archie Comics and Graphic India, The Archies is a musical drama being helmed by Zoya. It will premiere exclusively on Netflix and promises a musical experience bursting with youth, rebellion, friendships, first loves and everything a young adult goes through in their life. However, it still promises to have something for every generation. The Archies will start streaming in 2023 and looking at this fresh cast beaming with talent, it sure is going to be worth the wait.