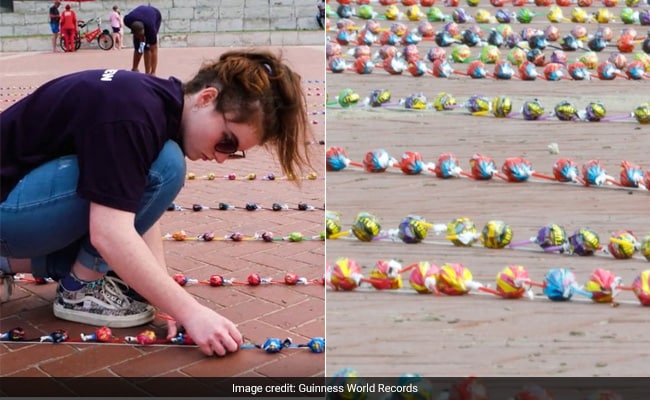 The achievement resulted in a record for the longest line of lollipops.

By creating a line of 11,602 lollipops, a South African charity for aquatic rescue set a Guinness World Record. Twenty-seven volunteers from Station 5 of the National Sea Rescue Institute (NSRI) came together to test the candy-arranging records on the Durban Beachfront Promenade.

According to the Guinness World Records, on August 6, 2022, 27 volunteers from NSRI Station 5 came together in the sweltering heat for the official record attempt on Durban Beachfront Promenade. To achieve the record, the line had to be at least 9,999 lollipops long. Every single one had to be touching, so attention to detail was key. The attempt would fail if any breaks were discovered in the line, no matter how minor.

One volunteer at NSRI Station 5 Luthando Ngqulunga told Guinness World Records, “We do the most difficult work in saving lives, so laying down the lollipops will be just like a walk in the park. Plus, we are very competitive in nature.”

“The NSRI is a volunteer-led rescue organisation that is on call 24/7. It was established in 1967, following the tragic loss of three fishing vessels near Stilbaai the previous year,” reported the Guinness World Records.

“Its formation was campaigned for by Patti Price, a teacher who had been rescued by the UK’s RNLI (Royal National Lifeboat Institution) in the English Channel when she was a child.”

The main danger to their success was any severe winds that would move the lollipops. The lollipops utilised in the project, according to the institution, will be handed out during community gatherings and school presentations.