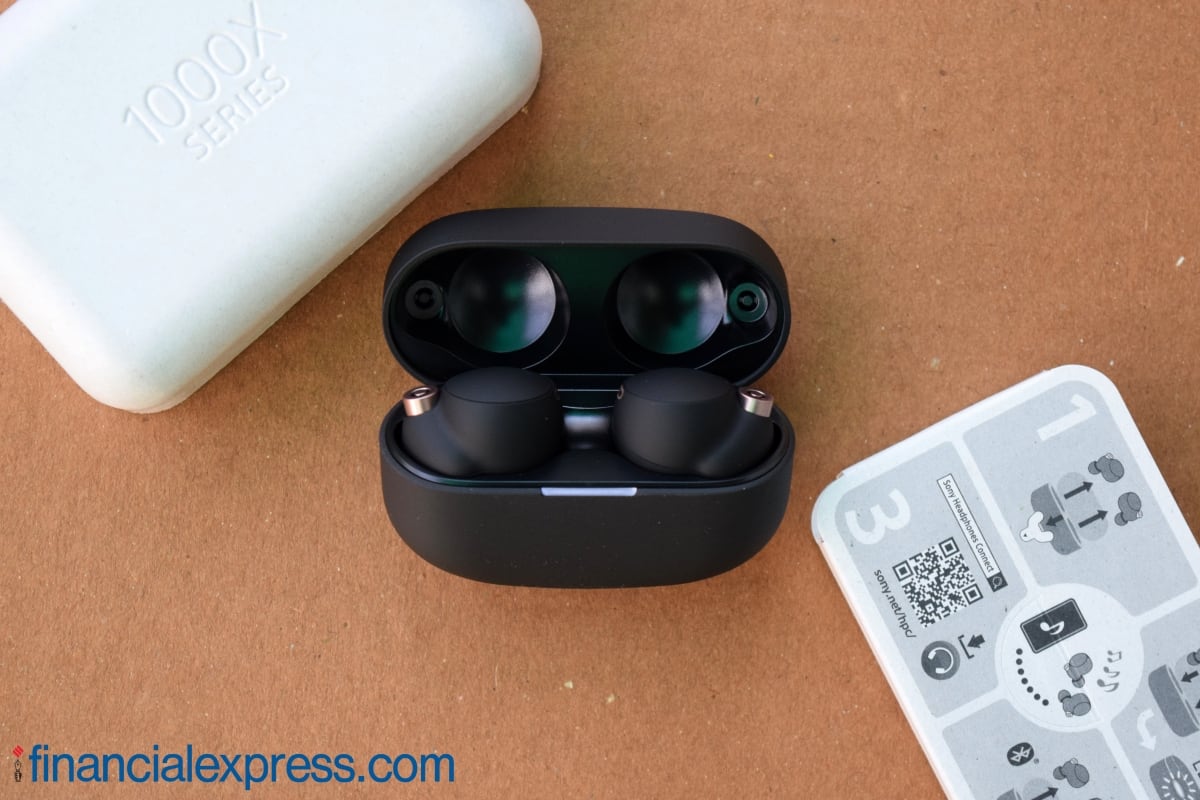 The WF-1000XM4 wireless earbuds can be summed up in two words. They’re smaller and sound better than their predecessor, the WF-1000XM3s. Just for the sake of formality, let’s add one more bit. They cost the same, too. That’s it, that’s the review.

That’s what fans and prospective buyers, would want to know, anyway.

The XM3s were perhaps the most sought-after wireless earbuds, at launch. In time, though, almost everyone (from Bose to Jabra to Apple) caught up and was able to best them, particularly in value. With the XM4s, Sony is back with a bang. Question is, has it packed enough to make them the new gold standard, like the XM3s, and if yes, for how long (the XM4s are launching in India over six months after global).

The big new update is that the XM4s are smaller. The buds, by up to 10 percent and the charging case, by a whopping 40 percent. There is no getting around the fact that the XM3s were HUGE. Some might even call them an anomaly. The XM4s are much more practical.

| Samsung Galaxy S21 FE 5G review: Is the sequel as good as the original?

The earbuds have a circular outer shell, now, though they’re still made of plastic and the tips have the same in-ear styling like before. They come in signature Sony matte black colourway—and in silver— with gold accents and are prone to smudge over time. There are no battery indicator LEDs on them anymore. The smaller footprint means, the entire surface is virtually touch-sensitive.

Internationally, Sony sells the XM4s with polyurethane foam tips. The company is so confident about the material, it calls them “noise isolation ear tips”. In India, though, you’ll get the XM4s with seemingly more regular silicone tips. We’ve tried both and while foam does entail a tighter fit and invariably, better passive cancellation, it isn’t the most durable. Silicone is more suitable for the long run (though Sony could have included both, considering the price).

Speaking of which, the earbuds are, also, water and sweat resistant, finally. This is one area where Sony is playing catch up. Having an official IPX4 rating means, you can take the XM4s out on a run, or to the gym, or virtually anywhere out and about, and into the shower.

One can argue that Sony could have shaved some more fat off these earbuds, since they can still pop out quite a bit, but the underlying hardware that—also—includes a hefty battery, make the XM4s totally worth it. The improved fit and finish make the XM4s more like a constant companion rather than the occasional acquaintance the XM3s were. You’re more likely to not have to invest in a different pair of buds for more active use cases with them. Breaking with convention, you can also wear them to bed though your mileage may vary.

Whatever be the case, be sure that the AirPods Pro (5.4g) and Samsung Galaxy Buds Pro (6.3g) offer better comfort. The XM4s are closer to the Jabra Elite 85ts at around 7g.

The charging case has received the biggest makeover. At around 41g, it’s far less overburdening (though you still can’t say it is pocket-friendly). The design also, is far more minimalist. It can charge over USB C and wirelessly, too.

The packaging deserves a mention because it’s all been done using environment-friendly recycled materials mostly this time with no trace of plastic, which is much appreciated.

Despite what may appear as a considerable downsizing on the outside, the XM4s are packed to the gills with top-tier specs and features. Right out of the gate, they’re one of the first wireless earbuds in the world to support Hi-Res audio over the LDAC codec. While not quite CD quality, LDAC can carry up to 3x more data (up to 990 kilobits per second) compared to typical Bluetooth audio. This, obviously, works with Android (the XM4s support AAC on iPhone).

Their DSEE Extreme feature can upscale compressed audio in real-time to something that is close to Hi-Res in quality using AI. They also support Sony’s 360 Reality Audio for a more immersive sound experience with supported content.

At their heart lies Sony’s new proprietary V1 chip. Not only is it responsible for improving active cancellation of higher frequencies while consuming less power, it also helps these earbuds to maintain a stable, low-latency connection.

Now, Sony says the XM4s can cut noise levels up to 40 percent better than the XM3s. We’d say, you can take the company’s word for it. Not that the XM3s were bad, but the XM4s are on another level when it comes to active noise cancellation. Toggle ANC on and POOF! everything around comes to a halt, as if like magic. We’ve been searching for adjectives to describe the state, but really, we can’t put a ring around the experience. It’s surreal.

Here’s a thought, though. Picture yourself so engrossed in that one song you love to death, you feel you’re practically living in it, in that moment. The world can wait. Now, turn that feeling up a notch, or maybe two – that’s the XM4s for you. We’re not kidding. To top it all up, Sony also built an automatic wind detection feature in these earbuds to reduce wind noise, that should particularly be useful in flights.

All said and done, the XM4s’ noise cancellation can give many over-the-year headphones a run for their money and that’s saying a lot about what Sony has been able to pull off here.

This class-leading noise cancellation is paired with an equally impressive ambient mode. You can assign either earbud to control ambient sound. You can choose to toggle between on and off with a single tap, or hold to enable “quick attention” to briefly lower playback volume (without pausing). The XM4s can do this automatically, also, through a feature called “speak-to-chat”. This works so annoyingly well, those in the habit of talking to themselves, or humming a tune every now and then maybe, should just keep it off.

While we’re on the subject of automatic settings, the XM4s are smart enough to analyse your ear shape and guide you to an optimal fit. They can detect your actions and locations you frequent to adjust settings such as how to take in the ambient sound, say for instance, when you’d want to focus on voices (you can turn this off if it creeps you out). All this works through Sony’s headphones connect app.

The XM4s support fast pairing with Android and Windows devices. Support for Google Assistant and Alexa is available.

Internally, the diaphragms are now bigger and better with Sony’s improved 24-bit amps that use 20 percent larger magnets (this is relative to the XM3s). The setup, though it largely favours bass, offers rich sound across the board with good stereo separation and little to no distortion at peak volume. The sound output, for the lack of a better word, is satisfying.

For voice calls, the earbuds come with a bone-conducting sensor and beam-forming mics (two each for a total of four). This is one area where Apple clearly rules the roost. Samsung’s Galaxy Buds Pro are a close second. The XM4s could be a third or fourth maybe. They’re not bad, but they most definitely need some work and fine tuning.

The XM4s make strong comeback with battery life. The earbuds are rated for up to 8 hours with active noise cancellation on. This is 12 hours with ANC off. The charging case carries enough juice for two full recharges. That brings the total to 24 hours with ANC on (36 hours with ANC off). No other competing product comes close. Even a quick 5-minute charge is enough for 1-hour of playtime, Sony says. The case, also, supports Qi wireless charging.

There’s a saying in the tech world. It is easier to make something big. The real challenge lies in making something small, and better. Look closely and you’ll find Sony has borrowed multiple features from its fabulous WH-1000XM4 headphones, shrunk them down, and masterfully put them all together in a package that we have absolutely no doubts in calling, a rare feat of engineering.

| Xiaomi 11i Hypercharge 5G review: Should you be hyped?

It’s maybe just one or two steps shy of pure perfection but with its premium fit and finish, excellent active noise cancellation and battery life, and superb audio, Sony’s WF-1000XM4s are the new gold standard to beat in wireless audio. Expectedly, they don’t come cheap. But if you have the budget—the XM4s cost Rs 19,990—nothing else comes close to delivering so much value.